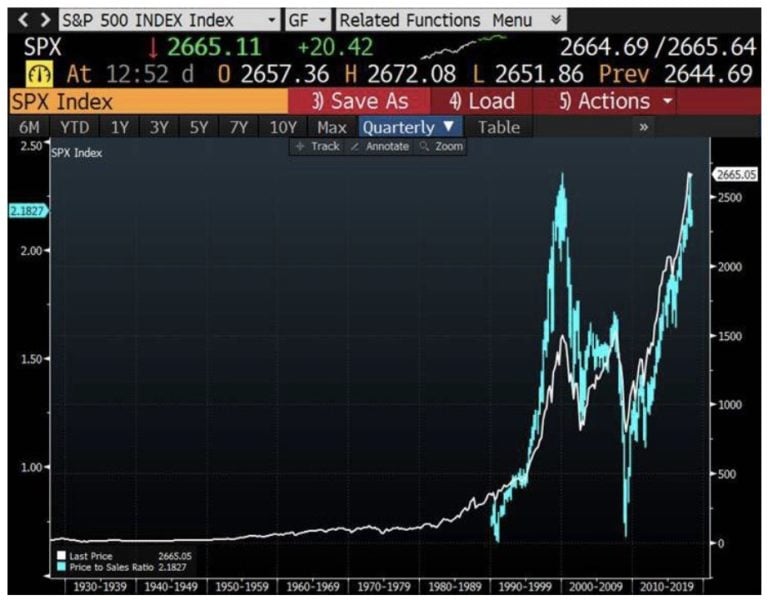 Let’s agree that in business, there is only one thing that guarantees the survival of a company: sales.

As a CEO, I understand that I can adjust my taxes, capital expenditures, research and development overhead, marketing efforts, staff size and a myriad of other line items (not to mention the way I report my business finances) to convey a false representation of my earnings to individuals outside my organization, at least in the short term.

That said, there are very few things I can do to create a façade around my sales. I either have them or I don’t. Firing 15K employees certainly boosts my bottom line for the next accounting period, but it doesn’t help my top line. A mentor taught me early on to put little faith in short-term period earnings figures, and instead look to sales for a truer indication of the state of a company.

So, after nine years of monetary injections into a financial system supporting record levels of cash distributions, we find ourselves at a potentially pivotal point in our financial history that demands we one question: Is the market still a good value? And rather than using a forward-looking estimate of what we hope earnings might look like next period to measure valuation today, let’s look at hard numbers and the trend path that got us here.

One of the most transparent measures of valuation is the price we’re paying today for unit sales compared against history. It’s very simple. But before you look at this price-sales ratio, you might want to sit down. Pay particular attention to the resistance levels.

In addition to the S&P 500 price levels (white), this chart shows the S&P 500 price-sales ratio (blue). What it depicts, other than a high probability of trouble ahead, is that the vast majority of gains on price means all of us pay higher prices per unit of sales as opposed to a better performing market. I hear many rationalizations for why this makes fundamental sense:

Toward the end of January, after observing a few financial trends from the preceding months, I felt compelled to share my thoughts on the market via my social networks. In this case, I felt strongly that it was time to move to a short portfolio or, at the very least, move to a capital preservation portfolio. When I make public calls like these, it’s usually for a multitude of reasons.
To begin with, a series of Federal rate hikes laid out the foundation for a fundamentally overvalued market. Additionally, January's gain on the S&P500 was in the 97th percentile of biggest monthly gains since 1950 (817 months!). It was the only time a monthly gain of that magnitude was made without the aid of a material sell-off beforehand. Anytime something happens for the first time, it’s important to take note.

These factors, combined with the price action in bonds around the same time, made my market senses tingle. Despite the risk of being the fool who predicted the end when the markets were poised to soar to new highs, I put away my pride in the hopes that my insights could help others who say they care.

We saw the power of consumer choices with the organic movement of the late 1990s. A 1.5 percent shift in consumer spending was enough to force food producers and grocery stores to adopt organic options.

Right now, consumers make up the largest part of the economy, with consumer spending accounting for more than 70 percent of total economic activity. If consumers shifted just five percent of their current spending to independent businesses, it would force corporations to act more responsibly.

Better connecting communities is what will help consumers change the way they spend and, ultimately, create broader economic prosperity for everyone. At the end of the day, it’s a choice for all us as consumers. So, there’s really only one question that needs answering: Will we choose change?

By: Thad Beversdorf, CEO of Spendinde

Leveraging his deep understanding of economics, Thad Beversdorf launched Spendindie in late 2017 after more than 13 years spent on the frontlines of the financial industry. Beversdorf previously served as global director at Crédit Agricole CIB in London and senior vice president at Jeffries in Chicago, where he specialized in corporate and investment banking on a global scale.

In realizing his vision for an economy that promotes widespread prosperity, Beversdorf founded Spendindie to serve as an online marketplace dedicated to creating a convenient and engaging way for people to make more conscious purchasing decisions. The startup is the only online marketplace that exclusively supports independent businesses devoted to utilizing consumer dollars in ways that stimulate the local economies, rather than funding multinational conglomerates.

Beversdorf received his MBA from the University of Chicago and served as an adjunct professor at Marquette University. He is a regular contributor to Zero Hedge, Voices of Liberty, Contra Club and First Rebuttal.