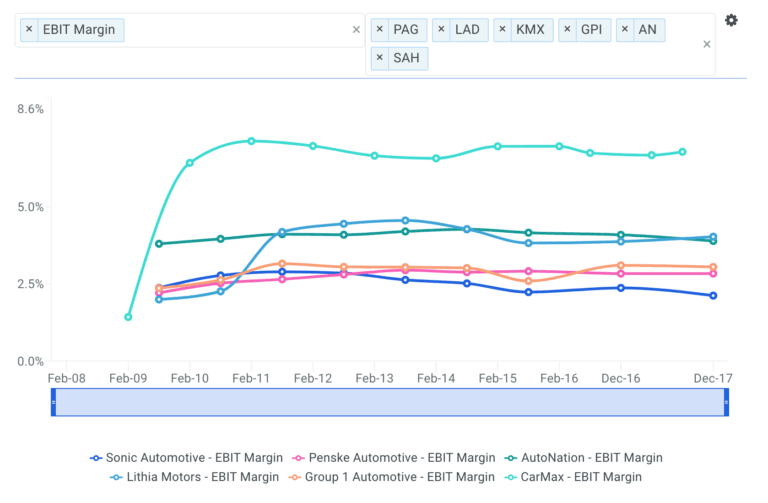 During value investor Charlie Munger's speech to Harvard students in 1995, Munger underscored his belief in the power of incentives:

“Well, I think I’ve been in the top 5% of my age cohort all my life in understanding the power of incentives, and all my life I’ve underestimated it. And never a year passes but I get some surprise that pushes my limit a little farther.”

“If the incentives are wrong, the behavior will be wrong. I guarantee it. Not by everybody, but by enough of a percentage that you won’t like the system.”

If you have ever been a part of the traditional car-buying experience, you can probably relate to being subjected to a suboptimal system. Steered toward vehicle models you are less interested in, passed off to financing experts, and waiting as sales people speak with managers in back offices, the traditional automotive retail experience can be frustrating.

Part of the reason for the unpleasant experience is the perverse sales incentives inherent in traditional auto retailing. Traditional salespersons are trained to push models that capture higher gross profit, often at the expense of an enjoyable car buying experience.

The traditional sales model was ripe for disruption, and CarMax (NYSE: KMX) has been able to execute on its well-designed incentive system (more on that below). What’s more, KMX stock is showing up to 20% upside according to finbox.io valuation models and Wall Street targets. As such, let’s take a closer look at CarMax’s business model, recent performance, and competitive advantages ahead of earnings next week.

CarMax grew its net sales and operating revenues 11% to $4.11B in the third quarter of fiscal 2018. Comparable store used unit sales rose 2.7% YoY due to an increase in conversion which was partially offset by lower store traffic. Website traffic grew 19% from continued investment in SCO and functionality. CAF income grew to $102.8M, or 15.1% YoY while net earnings grew 8.9% YoY to $148.8M.

Just like investment managers who invest in their own funds (what Charlie Munger describes as “eating their own cooking”), companies with well-designed incentive systems have what NYU professor and best-selling author Nassim Nicholas Taleb describes as having “skin in the game”:

“Skin in the game means that you do not pay attention to what people say, only to what they do, and to how much of their necks they are putting on the line.”

CarMax’s compensation system is designed so that sales consultants earn the same commission regardless of the vehicle being sold. Effectively, this makes CarMax have more “skin in the game” than traditional retailers because they are willing to forego incentivizing sales of higher profit models for the sake of better matching customers and vehicles. Thus, management has designed an incentive system where its sales team’s interests are aligned with customers.

Beyond its well-designed commission program, CarMax also appears to have earned competitive advantages in the form of its no-haggle pricing policy, its Wholesale business, and CAF unit. A no-haggle pricing policy allows for a less aggravating buying process in contrast to CarMax’s traditional auto retail peers. Weekly auctions in the Wholesale business allow CarMax to better gauge vehicle demand and its CAF unit acts as a source of cash and additional profits while KMX’s peers rely on third-party financing.

Sources of Growth and Operating Margin

While its sales policies and business lines give CarMax competitive advantages, its investments and efficiency have positioned the company well for growth. Approximately one-third of CarMax’s used-vehicle stores are less than five years old. Over the short-term, unit sales growth from these stores as well as new stores looks to drive top-line growth. Management plans to open 13-16 used vehicle stores annually through next year.

Management has also done well to sustain its operational efficiency. Since 2008, CarMax has posted higher EBIT margins compared to its peers: 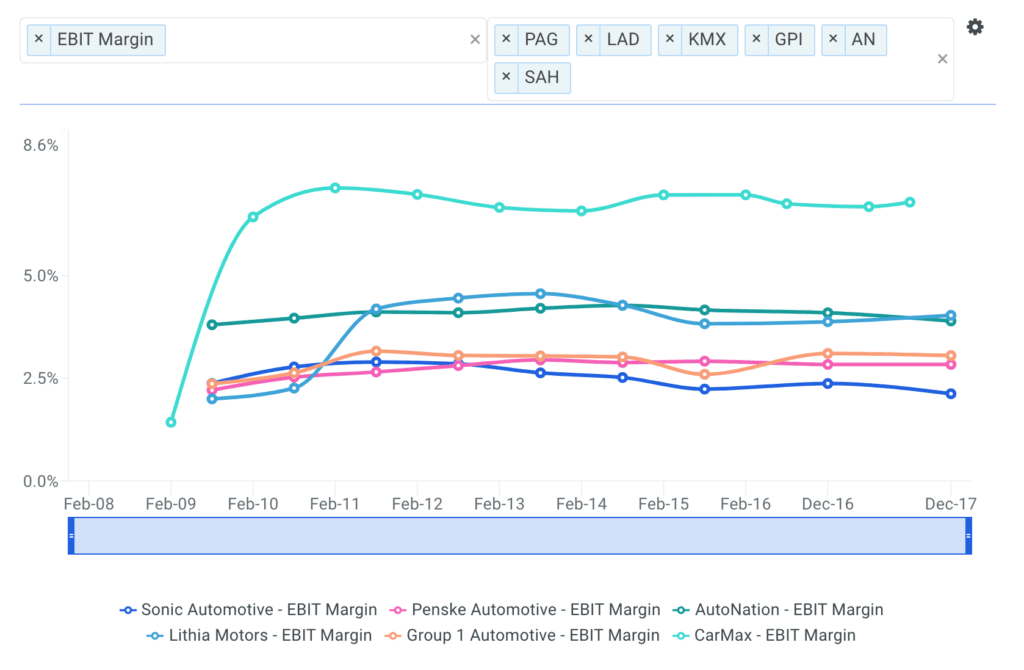 EBIT margin could compress some over the short-term, however, as expected SG&A costs and other charges look to create downward pressure.

Wall Street sees pressured margins in the short-term as well, with consensus estimates for EBITDA margin compressing slightly over the next few years. Thereafter, analysts expect a rise to the low-double digits. Top-line estimates look strong with revenues touching double-digit growth over the next five years:

Incorporating these assumptions across six finbox.io valuation models produces an average intrinsic value estimate of $72.95. This implies over 20% upside to the stock. Wall Street’s consensus 1-year target pegs KMX’s fair value at $77.71, or over 25% upside.

Due to the cyclical nature of the auto industry, demand for bigger ticket items could be pressured in the case of economic weakness. As noted, margin compression looks likely over the short-term due to increased spending. Used vehicle prices have also been in decline, but are projected to stabilize over the next three years.

When companies lose sight of always putting the customer first, business models can be vulnerable to disruption. That has certainly been the case for the cumbersome traditional car buying experience and CarMax has used it to its advantage.

CarMax’s no-haggle, customer-friendly buying process and well-designed commission system aligns sales consultants’ interests with customers. The strategies have paid off for CarMax, generating solid top- and bottom-line growth while building a leading position in the industry. With shares showing over 20% upside, value investors may want to take a closer look at CarMax before it reports earnings on Wednesday morning.