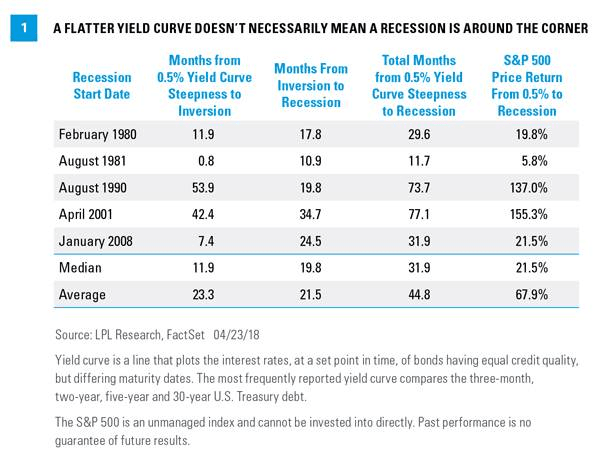 There are several market myths related to certain market indicators which have the tendency to distract investors from what really matters in assessing market opportunities. We believe the overall fundamental backdrop is currently quite positive thanks to solid economic growth and strong corporate earnings trends, while market sentiment and technicals continue to suggest future equity strength. This week we will bust some common market myths.

The yield curve has flattened throughout 2018, causing some to fear that a recession may be right around the corner. This makes sense, as the past nine recessions all saw a yield curve inversion right ahead of the economic contraction. The difference between 2- and 10-year Treasury yields broke below 0.50% recently, reaching 0.41% just last week — the flattest it has been since September 2007.

Though significant, it is important to note that when looking back at the previous five recessions, once the yield curve hit 0.50%, it took a median of nearly a year before the curve inverted [Figure 1]. Once it inverted, it took about 20 months until a recession started. All along the way, the S&P 500 Index posted a median return of 21.5% over those 32 months. In other words, there could be years left to this expansion before the yield curve truly becomes a worry. For more of our thoughts on why we believe the yield curve isn’t yet a major concern, be sure to read our latest Bond Market Perspectives, due out tomorrow.

The Institute for Supply Management’s (ISM) Manufacturing Index hit a cycle high back in September 2017, but then made yet another new cycle high in February 2018. Many have posited that a peak in manufacturing suggests an impending recession, but the data does not back this up.

Over the past five economic cycles, it has taken the United States 45 months on average to enter a recession following a peak in the ISM. Meanwhile, the average cumulative S&P 500 price return during those periods (using end of month returns) was 56.7% [Figure 2]. Note that this average includes periods of very strong returns in the mid- to late-1980s and 1990s, and one period of negative returns in the early 1980s, which is an indication that not every cycle is equal. With ISM manufacturing making a new high so recently, we think this means there is still plenty of time left in this economic cycle. 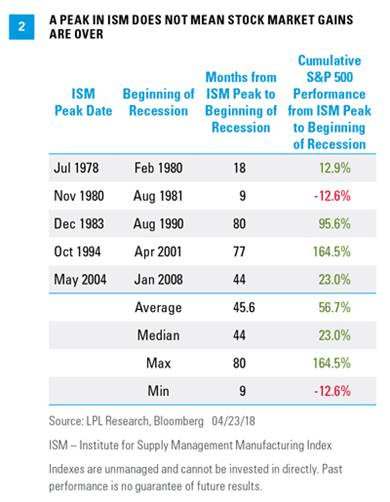 With yields surging around the globe, breaking out to multi-year highs in several cases, many think that higher rates are a bad thing. The data suggest quite the opposite.

We have found that stocks and bond yields historically have been positively correlated until the 10-year yield gets up around 5%, at which point the correlations break down. In other words, it is perfectly normal for yields to rise along with stocks. Taking this a step further, Figure 3 shows that out of the most recent 23 periods of higher rates (based on the 10-year Treasury yield), stocks have gained ground 19 of those times. Recent periods have produced even better performance, as stocks have risen during each of the last 11 periods of rising rates (since 1996). 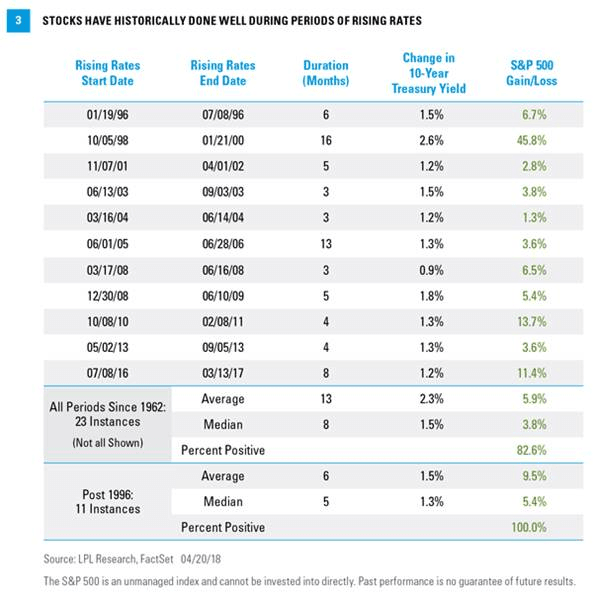 Stocks have done well since interest rates began to move higher in September 2017. History suggests that higher rates may actually be a good thing, and should the 10-year Treasury yield break above the psychologically important 3% level, the equity bull market may garner further support.

LPL Research is looking for S&P 500 earnings growth to approach the mid-teens in 2018, with many expecting even stronger growth. What we find interesting about this is even though corporate profits are expanding and making new highs, some are predicting trouble again for stocks as earnings growth potentially slows later this year or in 2019, (a topic we discussed in our earnings preview commentary on April 9).

Once more, looking purely at the data shows that double-digit earnings growth is a major positive for equity returns. As Figure 4 reveals, going back to 1991 there have been 12 calendar years that sported at least double-digit earnings growth and all 12 years the S&P 500 produced positive total returns, with an average return of 16.7%. Should earnings come in comfortably above double-digits as we expect, this is yet another reason to expect the bull market to continue in 2018. 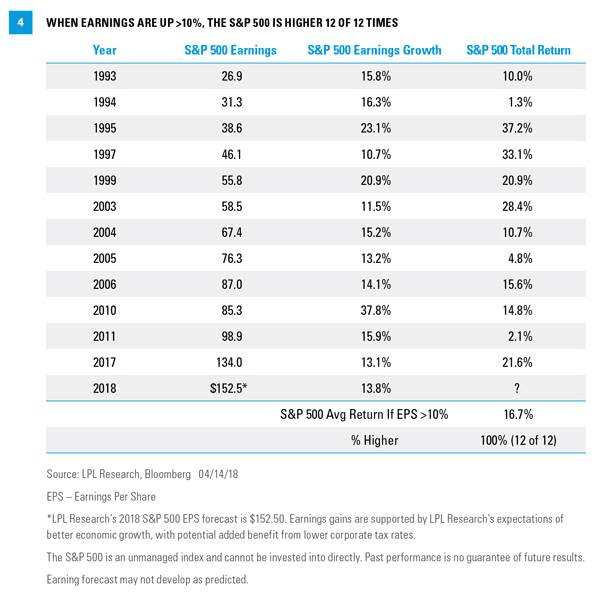 It is important for investors to not get distracted by these or other market myths. Remember that the overall global economy continues to expand, fiscal policy remains a major tailwind to growth for the U.S. economy and corporate profits, and we are not seeing any of the same excesses seen at previous market peaks that led to recessions. We continue to anticipate double-digit stock market gains this year, with leadership from the value style, small caps, cyclical sectors, and emerging markets.*