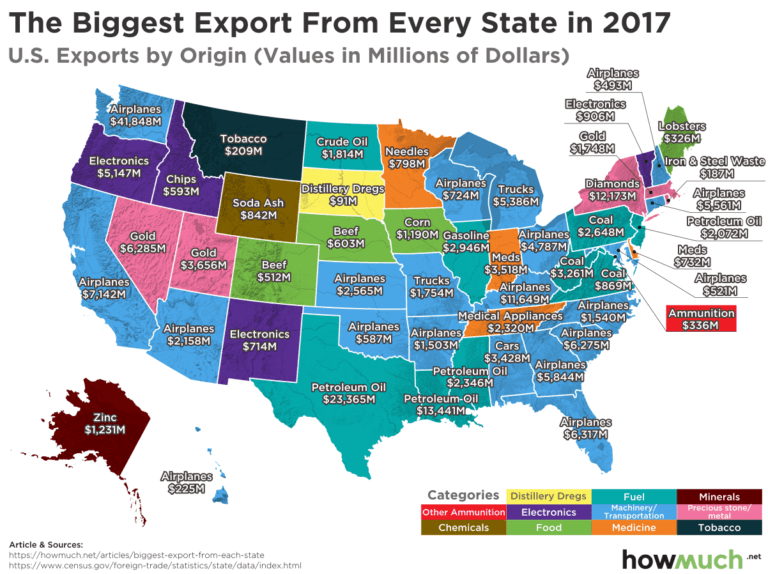 Is the United States sparking a trade war with the rest of the world or not? We aren’t quite sure what President Trump is thinking, but his recent comments on trade did get us thinking about what impact some of his proposals might have on different industries. So we created a new map demonstrating which industries export the most products in each state across the country.

We created out latest map in three steps. First, we used US Census Bureau data to identify the most prevalent export industries in 2017 in each state. Then we assigned a color for each category or industry, generating a snapshot of the geography of exports. Finally, for each state, we labeled the specific sector within the category, so that a state that is light blue for “Machinery/Transportation” is labeled specifically “Airplanes,” “Trucks,” etc. on the map. This lets you quickly and easily see which states (and regions) depend on which export industries for economic stability and growth.

We can summarize the ten most export-dependent states by looking at only three industries: airplane manufacturing, natural resources, and precious metals/stones. As you might expect, states heavily dependent on natural resources are typically grouped together. There are three main petroleum-rich states across the South: Texas, Louisiana, and Mississippi. A group of coal mining states can be found in the North East, including Virginia, West Virginia, and Pennsylvania, and there’s gold to be found in western neighbors New Mexico and Nevada.

What may be more surprising is that manufacturing states tend to be grouped together, too. The Southeast is home to several states which are heavily dependent on sending airplanes to overseas buyers. That being said, airplane manufacturing is stretched across the country, with states from Kansas ($2,565M) to California ($7,142) illustrating that the supply chain for building airplanes clearly stretches far and wide.

And that leads us to the state at the very top of the list: Washington is the most heavily dependent on exports by far, almost doubling second-place Texas. That’s thanks almost entirely to the presence of Boeing. The company sells both commercial jetliners and aerospace technology (think rockets) to other civilian companies and governments around the world. This explains why the media covers the potential impact to Boeing for every nuance of trade war rhetoric emanating from the White House.

So what is the biggest takeaway from our map? Building and manufacturing airplanes for the global market is deeply important in 17 states, totaling just under $100 billion in exports, and that’s not even the entire value of national airplane exports—that’s just for those states in which it is the leading export. The threat to President Trump’s pro-tariff agenda is that other countries may retaliate with their own protectionist measures, ultimately hurting companies like Boeing. If that happens, the economic damage will ripple across the country, in the airplane manufacturing industry as well as in the many other export industries that are key pieces of different states’ economies.