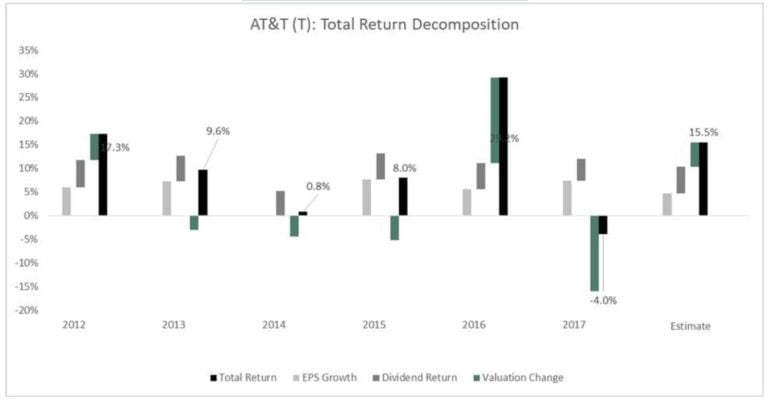 This has created a potential buying opportunity at AT&T.

AT&T is a leading provider of communications and digital entertainment services in the United States and the world, offering internet access, as well as TV and wireless service. The company is the result of a dizzying array of mergers since it was spun off in 1984 and today, it sports a market cap of $233B.

The company’s late-January Q4 report was a good one with strong results and favorable guidance. Revenue was flat overall YoY but the International business saw a 16% increase. Thanks to expense controls, margins and free cash flow remain strong. The company’s attempted takeover of Time Warner (TWX) is working its way through the courts and should it be allowed to go through, it would be a net positive for AT&T. However, that is uncertain at this point.

AT&T’s EPS has grown steadily in the past decade as it continues to grow its international business and make prudent acquisitions, as well as expand margins. The past several quarters have seen the fruits of an expense rationalization program AT&T has in place that has improved margins greatly, driving EPS higher. Organic revenue growth is not a primary driver of EPS growth for AT&T and given the size and scope of its business, likely never will be. This is the rationale for the company’s purchase of DirecTV as well as the proposed purchase of Time Warner.

Based upon the company’s lack of meaningful revenue growth but the strong results its expense controls have allowed, we are forecasting five-year EPS growth at 4.7% annually. This includes low single digit revenue growth as well as continued margin expansion. If the merger goes through, margins will improve as TWX has a more favorable mix than AT&T, and would improve its EPS growth overall. However, there is no certainty the purchase will be allowed and this analysis excludes TWX.

AT&T’s PE has bounced around a lot in the past ten years and of late, its earnings growth has not been appreciated by investors. AT&T’s current PE of 10.4 is the lowest it has been at any point in the past decade on a full-year basis, creating a value situation for investors. This plays into AT&T’s conservative, safety-oriented shareholder base as not only does it pay a sizable dividend, but the stock is cheap. With continued EPS growth and a reversion to the mean for its PE, AT&T represents good value here for conservative, value-oriented investors. We are forecasting 5.2% in annual returns based solely upon reversion to the mean for the valuation.

The dividend yield is near the middle of its historical range at 5.6% and we expect it to fall over time as the stock moves from its current value towards our fair value through multiple expansion, with growth outpacing future dividend increases.

AT&T’s quality metrics have declined somewhat in recent years as it has continued to take on debt to fund acquisitions. AT&T has one of the highest levels of debt of any company in the US market and should the TWX merger go through, it may rise further. However, AT&T already raised debt in 2017 to pay for TWX so the damage has largely been done. On the other hand, if it doesn’t go through, AT&T could potentially retire that debt and improve its metrics quickly. We expect earnings growth to allow AT&T to reduce its leverage over time.

We expect the payout ratio to fall over time as the dividend rises slower than EPS, improving the safety of the dividend and the company’s ability to pay down debt. AT&T’s recession resistance will help as well should we see a downturn as its EPS actually grew slightly during the Great Recession. With a utility like business model, its recession resistance is not in question. AT&T’s principal risks at this point are pricing in its wireless segment and constant investments in infrastructure that are needed to stay competitive. However, diversification into DirecTV and possibly TWX help AT&T mitigate those risks somewhat. This diversification and its sheer scale are major competitive advantages for AT&T.

Overall, AT&T looks like it represents good value here as it trades for less than 80% of its fair value. It also offers the safety and income of a 5.6% yield and the prospects of further dividend increases. We are forecasting 15.5% total annual returns over the next five years comprised of the yield as well as EPS growth and multiple expansion. Growth will be higher if the Time Warner merger is allowed but for now, the stock is a good buy on its own merit. AT&T’s reputation for being a safe stock is well intact as it offers the chance to buy a recession-resistant company at a great yield and trough valuation. 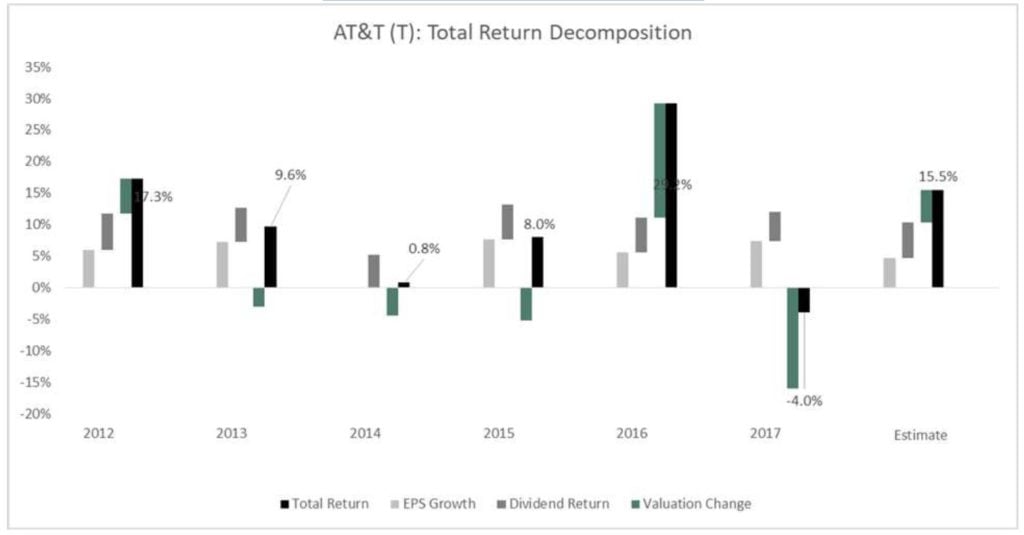