ValueWalk
Home Business Aswath Damodaran – Alphabet Soup: Google Is Alpha, But Where Are The... 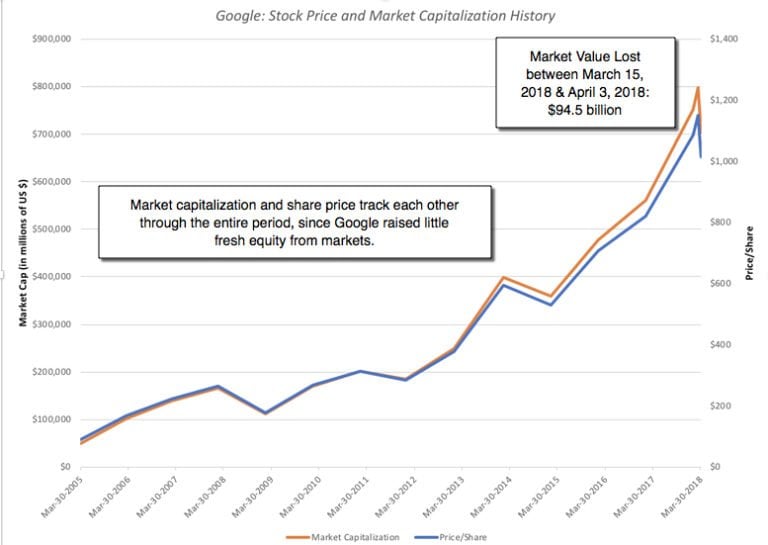 In my last two posts, I looked first at the turn in the market against the FANG stocks, largely precipitated by the Facebook user data fiasco and then at the effect of the blowback on Facebook’s value. I concluded that notwithstanding the likely negative consequences for the company, which include more muted revenue growth, higher costs (lower margins) and potential fines, Facebook looks like a good investment, with a value about 10% higher than its prevailing price. I argued that changes are coming from both outside (regulators and legislation) and inside (to protect data better), and these changes are unlikely to be just directed at Facebook. It is this perception that has probably led the market to mark down other companies that have built business models around user/subscriber data and in these next posts, I would like to look at the rest of the stocks in the FANG bundle and the consequences for their valuations, starting with Google (NASDAQ:GOOG) in this one.

The value of a company is driven by a myriad of variables that encompass growth, risk and cash flows, which are the drivers of value. In a typical intrinsic valuation, there are dozens of inputs that drive value but there is one variable, that more than any other, drives value and it is critical to identify that variable early in the valuation process for three reasons:

In short, knowing what you are looking for makes it much more likely that you will find it. But how do you identify the key driver variable? In my template, I look for two characteristics:

If you accept this characterization, there are two implications that emerge. The first is that the key value driver can and will be different for different companies; a mechanistic focus on the same input variable with every company that you value will lead you astray. The second is that there is a subjective component to your choice, and the key value driver that I identify for a company can be different from the one you choose for the same company, reflecting perhaps the different stories that we may be telling in our valuations. In my just-posted Facebook valuation, I believe that the key variable is the cost that Facebook will face to fix its data privacy problems and it manifests itself in my forecasted operating margin, which I project to fall from almost 58% down to 42%, in the next five years. Note that revenue growth may have a bigger impact on value, but in my judgement, it is the operating margin that I am most uncertain about. I will use this post to value Google and highlight what I believe is the driver variable for the company.

If Facebook is the wunderkind that has shaken up the online advertising business, Google is the original disruptor of this business and is by far the biggest player in that game today. It is ironic that the disruptor has become the status quo, but until there is another disruption, it is Google's targeted advertising model, in world, and its search engine and ad words that dominate this business. Google has had fewer brushes with controversy, with its data, than Facebook, partly because its data collection occurs across multiple platforms and is less visible and partly because it does have a tighter rein on its data.

Google has been a rule breaker, right from its beginnings as a publicly traded company. It used a Dutch auction process for its initial public offering, rather than the more conventional bank-backed offer pricing model, and while it has had a few stumbles, its ascent has been steep:

The secrets to its success are neither hard to find, nor unusual. The company has been able to scale up revenues, while preserving its operating margins: 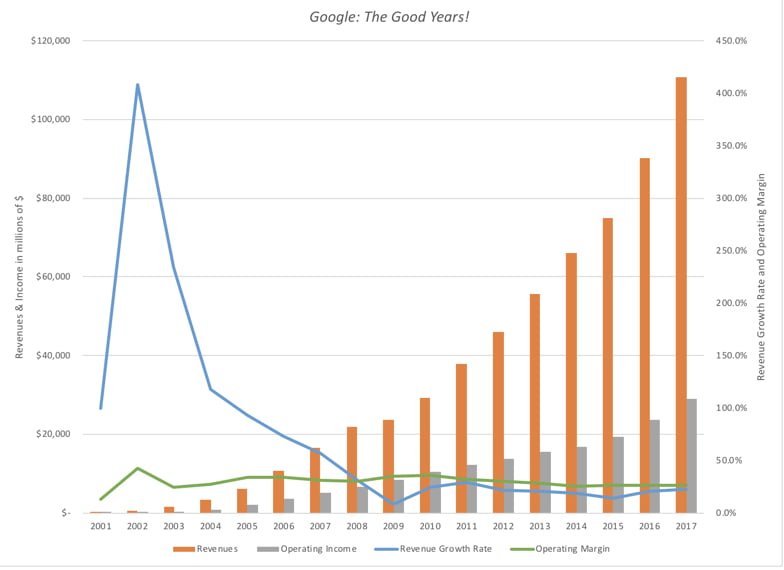 The most impressive feature of Google's operations has been its ability to maintain consistent revenue growth rates and operating margins since 2008, even as the firm more than quadrupled its revenues.

To value Google, we start with the numbers, but in order to build a story we have to assess the landscape that Google faces.

The bottom line is that Google has changed the advertising business  and dominates it, with Facebook representing its only serious competition. It's large market share should act as a check on its growth, but Google has been able to sustain double digit growth by growing the digital portion of the advertising business and claiming the lion's share of that growth, again with Facebook. The wild  card is whether the data privacy restrictions and regulations that are coming will crimp one or both companies in their pursuit of ad revenues. As digital advertising starts to level off, Google will have to look to its other businesses to provide it a boost.

As with Facebook, I was a doubter on the scalability of the Google story, but it has proved me wrong, over and over again. In valuing Google, I will assume that it will continue to grow, but I set the revenue growth rate at 12% for the next five years, below the 15% growth rate registered in the last five, for two reasons. The first is that digital advertising's rise has started to slow, simply because it is now such a large part of the overall advertising market. The second is that data privacy restrictions, if restrictive, will take away one of Google's network benefits. I do think that the profitability of Google's businesses will stay intact over time, with operating margins staying at the 27.87% recorded in 2017. With those key assumptions, I value Google at $970, close to the price of $1030 that it was trading at on April 13. 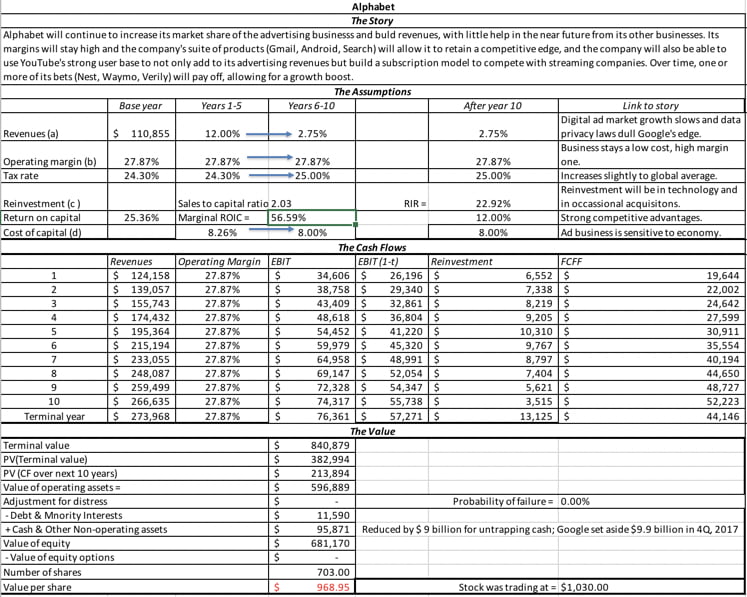 As with my Facebook valuation, each of my key inputs is estimated with error, and capturing that uncertainty in distributions yields the following outcomes:

No surprises here. The median value is about $957 and at a stock price of $1.030, there is a 65% chance that the stock is over valued. As with Facebook, there is a positive skew in the outcomes, and that skew will get only more positive, if you build in a bigger payoff from one of the bets. I have never been a Google shareholder, and that has cost me lost returns over time, but this is as close as I have ever been to owning the stock. My only concern, assuming that Google goes to $950 or lower  in the near future would be that since I already own Facebook, I will be over invested in digital advertising's future success

Google's value is driven by revenue growth and operating margins, and changing one or both inputs has a significant effect on value.

The shaded cells represent the combinations that deliver values higher than the prevailing stock price of $1,030/share. In my judgment, Alphabet's bigger value driver is revenue growth, not margins, and it is on that input, this valuation will rise of fall. It is my view that while data privacy restrictions will translate into much higher costs for Facebook, partly because it has so little structure currently, it will result in lower growth for Alphabet. If the data privacy restrictions handicap Google so badly that it loses a big part of what has allowed it to dominate digital advertising for the next five years, Google's revenue growth and value will drop dramatically. However, Google is just starting to tap the potential in YouTube, and if it is able to position it as a competitor to Spotify, in music streaming, and Netflix, in video streaming, it could discover a new source of revenue growth, with strong operating margins.