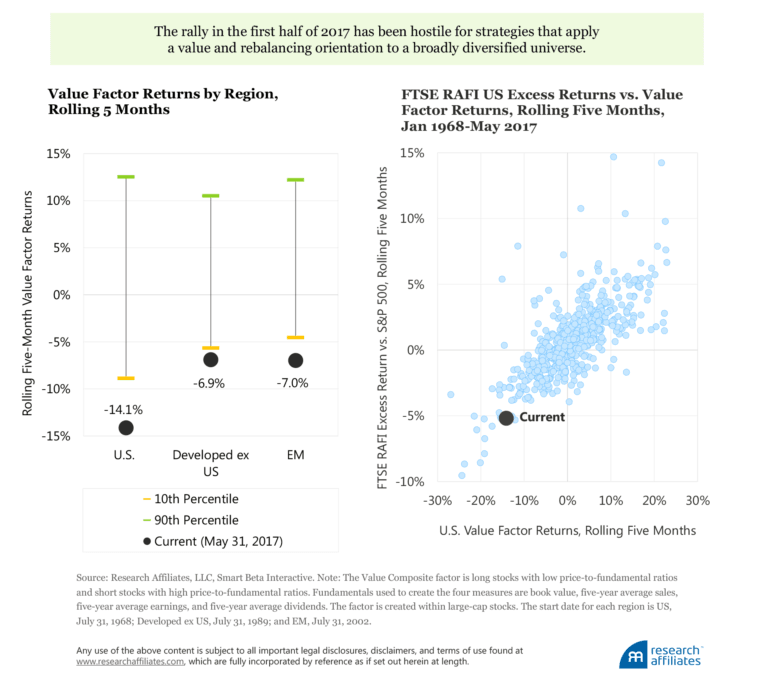 The first half of 2017 is shaping up to be unequivocally brutal for value-oriented rebalancing strategies. Wired to avoid pain, we humans know it’s very tempting to ask whether a model or philosophy is broken, especially the moment it dashes expectations.1 When distress afflicts us, our instinctive response is “Get me outta here!” Perhaps, instead, we should consider a less conventional approach as advised by John’s nine-year-old daughter to her occasionally stressed-out dad: “CHILLAX!”

A mixture of the words “chill out” and “relax,” to chillax, according to the Merriam-Webster Dictionary, means to calm down. For John, chillaxing means watching movies on Netflix and Apple TV or searching for latest sports stats on Google News. For Amie, shopping on Amazon, doing yoga on Microsoft Xbox, or browsing her Facebook newsfeed usually does the trick. While embracing these activities usually soothes our nerves, underweighting the stocks of these six companies—FANMAG2—has rattled our portfolios. With all but one surging by more than 25%,3 these six stocks have collectively led the stock market rally of 2017.

Chillax to the Max

As we approach the second half of the year, the rally’s breadth, according to some, is narrowing to levels not seen since the tech bubble. Such an environment tends to be horrific for strategies, such as the RAFI Indices, that apply a value and rebalancing orientation to a broadly diversified universe. It’s no easy feat to ignore the discomfort and angst that follow underperformance, even when the rational side of our brains persistently lectures us that 1) such outcomes are to be expected in these conditions and 2) extrapolating the past into the future is one of the biggest sources of investor error (Arnott et al. [2016] and Arnott, Beck, and Kalesnik [2016a,b]).

Many of our readers will not be surprised that RAFI strategies consistently underweight contemporary high-flyers, such as today’s FANMAG.4 In light of their structural positioning, won’t the RAFI portfolios fail to emphasize these very popular stocks currently outperforming the market? Of course! But despite interim periods of short-term underperformance, the RAFI strategies have a track record of producing long-term excess returns.5

In the current hype-filled marketplace, investors can too easily forget the long-term value proposition of contra-trading: trimming the expensive darlings with, on average, lousy forward-looking returns, while rebalancing into the unloved stocks with, on average, attractive prospective returns. This rebalancing engine embedded in the RAFI Fundamental strategies is what ultimately drives our long-term excess returns. But these excess returns can only be captured by investors who are able to chillax during the inevitable short-term bouts of adversity. Chillaxing is much easier said than done.

In the first five months of 2017, RAFI strategies have broadly lagged the market. As of May 31, the RAFI US Index delivered a cumulative return of 4.1%, trailing the S&P 500 by 4.5%, putting it in the worst third percentile of all rolling five-month observations since May 1984. While notably severe in the United States, the relative shortfalls are also bleak in the developed ex US and emerging markets regions: year-to-date excess returns are –3.3% for RAFI Developed ex US and –4.1% for RAFI Emerging Markets. Do these results frustrate? Of course. Alarming? To us, not at all.

Thus far in 2017, three market features have effectively been strikes against value-oriented rebalancing strategies.6 The first is a severely hostile environment for value stocks evidenced by massively negative value premiums around the globe. Using the US value composite factor return from our Smart Beta Interactive tool,7 we observe that US value stocks so far this year have trailed their growth counterparts by over 14%. This outcome is within the worst historical fifth percentile across all rolling five-month outcomes since 1968. Shockingly, over a five-month period, the negative value premium is lower than what was realized over the 2015 calendar year, one of the worst-performing years for value strategies in the past decade. As in the United States, value premiums across both international and emerging equity regions plummeted to historic bargain-basement levels, leaving little-to-no refuge for value-oriented investors.

The second strike against RAFI is that persistently trending, momentum-driven markets deprive rebalancing strategies of any gains resulting from mean-reverting opportunities.

As the market pays more and more of a premium for expected growth, RAFI strategies are designed to trim growth stocks back to their economic scale. While trading into a deeper value tilt in markets where growth stocks continue to climb higher and higher inevitably and consis­tently reaps rewards in the long term, in the interim it is also bound to result in losses, as is the case today.

The narrowing breadth of the market rally has been a third strike (although not an out!) to our strategies. According to James Bianco of Bianco Research, the current rally is the most concentrated since the 1995–2000 tech bubble. Six stocks alone—the FANMAG stocks—have had an overwhelming influence on the S&P 500, driving nearly half of the market’s year-to-date gains.8 Naturally, the RAFI US Index’s underweight exposure to these six high-flyers accounts for one-fifth of our relative year-to-date underperformance.

No wonder RAFI has struggled in the first half of 2017, having entered the year with an underweight allocation— and then further increasing the underweight exposure—to the very group of stocks that has dominated the current momentum-driven, anti-value rally.

A Home Run in the Long Run for Expensive Stocks?

Whenever value investing struggles to perform, a seemingly credible explanation is always offered up, such as: “The expensive valuations for growth stocks are justifiable.”

Consider the FANMAG stocks. Based on a few common metrics, this group collectively exhibits steep valuations. On a weighted-average basis, the group currently trades at a price-to-earnings multiple of 56 times, more than twice that of the S&P 500. In aggregate, the six are currently trading at a price-to-sales multiple of 6.9 times, a 67% premium to the market. Finally, with all but two generating no dividends, the group is now delivering a weighted dividend yield of 0.85%, 56% lower than the S&P 500. Are these lofty valuations justifiable? That is, can we expect popular expensive stocks to reliably deliver excess returns in the long run?

A look at the historical evidence over the last 60 years suggests poor odds of the popular pricey stocks’ outperforming in the long run, even if they are shares of large, growing, and profitable companies. Consider the largest 500 US companies by market capitalization with 1) a price-to-sales ratio exceeding 6 times and 2) earnings per share exceeding the company’s prior five-year average earnings per share. From 1957 to 2016, more than 500 companies fit these criteria, 70 of which existed during the tech bubble. Over subsequent 10-year spans, this group delivered an average annualized excess return of –3.8% (a statistically significant outcome), and nearly two-thirds underperformed the broad market. 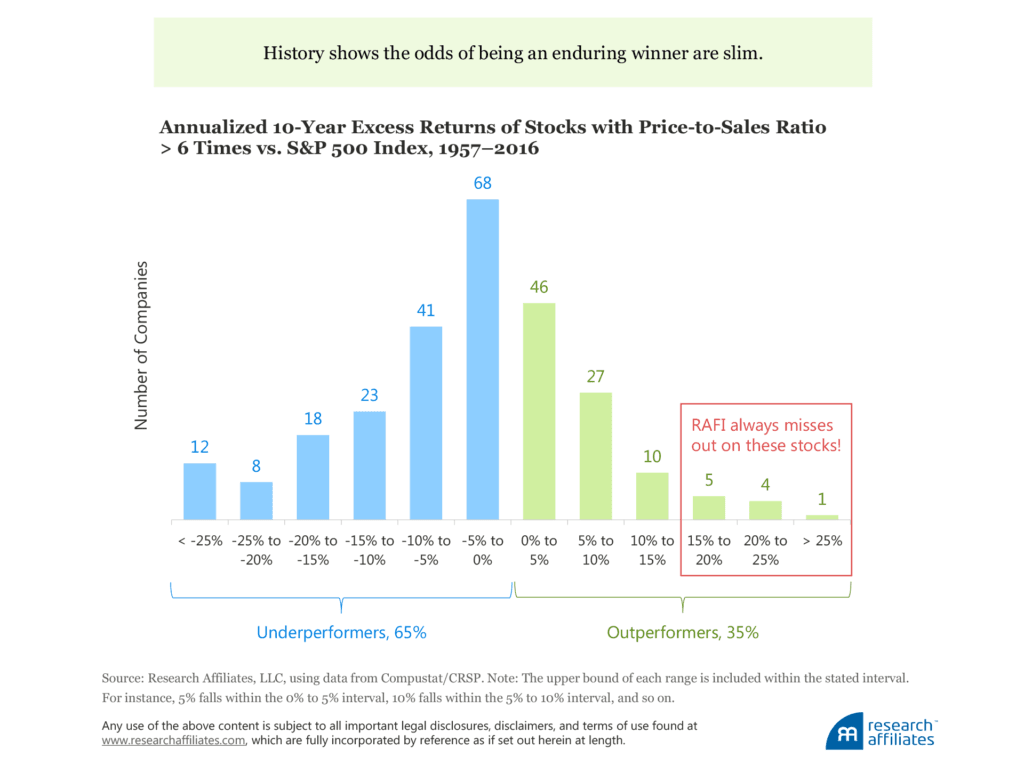 But wait! Shouldn’t some growth stocks deliver staggering outperformance,9 the kind of “tenbaggers”10 that stockpickers dream of? Of course, but it’s rare. Over the last 60 years, just a handful—exactly 10—of these large, growing, and profitable companies whose stocks traded at a price-to-sales ratio greater than 6 times subsequently generated a long-term excess return of 15% or more. As history shows, the odds of being an enduring winner are not good: the vast majority of seemingly likely home-run aspirants actually strike out—some quite significantly so.

Because RAFI includes stocks at their current economic scale, the strategy consistently exhibits a disproportionately lower allocation to high-flying outliers relative to a capitalization-weighted index. Indeed, over the last 60 years, a representative Fundamental Index US strategy would have been underweight all 10 of the period’s high-priced winners.

If you believe we’re in a new era in which high-priced, trending growth companies will consistently outperform, then RAFI may not be the strategy for you. The notion of potentially missing out on outsized gains from large, growing, and profitable companies will always be difficult, but armed with the conviction of a time-tested investment philosophy, passing up the rare tenbagger in exchange for the potential of long-term outperformance becomes more tolerable.

About one year before Merriam–Webster Dictionary welcomed the word chillax in 2014, the Oxford English Dictionary had added another trendy newcomer: FOMO, the acronym for “fear of missing out.” Often aroused through social media, FOMO usually generates unease in people (including investors) who worry others are having a far more rewarding experience than they. Research suggests that FOMO contributes to a vicious cycle of negative outcomes, such as higher anxiety and more impulsive social media use, which negatively impact mental health (Baker, Krieger, and LeRoy [2016]).

Just as missing the hottest party, restaurant, or TV show can ignite FOMO, so can underweighting the trendiest stocks like FANMAG. FOMO experienced by investors also prompts negative outcomes such as the temptation to abandon time-tested, value-oriented, contra-trading strategies like RAFI. It’s tantalizing to chase impressive performance and not miss out on all the excitement. But as Russ Kinnel documented in his seminal article “Mind the Gap,” performance chasers may win from time to time, but they experience a 2.5% shortfall in the long run.

We recommend chillaxing as a cure for the ills of FOMO, as a means of improving both mental and investment health. As MIT economist and Nobel Laureate Paul Samuelson said, “Investing should be more like watching paint dry or watching grass grow. If you want excitement, take $800 and go to Las Vegas.”

We hope we’ve inspired you to take a deep breath, far away from the market’s constant noise and stimula­tion, to reflect on whether you have conviction in a time-tested investment philosophy. We urge you to evaluate shorter-term results against an entire range of outcomes rather than relative to an expected return, or worse, to trailing three- or five-year returns. We encourage you to tolerate the discomfort of missing the latest fads and in finding the conviction to ignore FOMO, and to simply chillax. This choice may very well help you achieve a “home run” in conscious mindfulness and in long-term investment success.