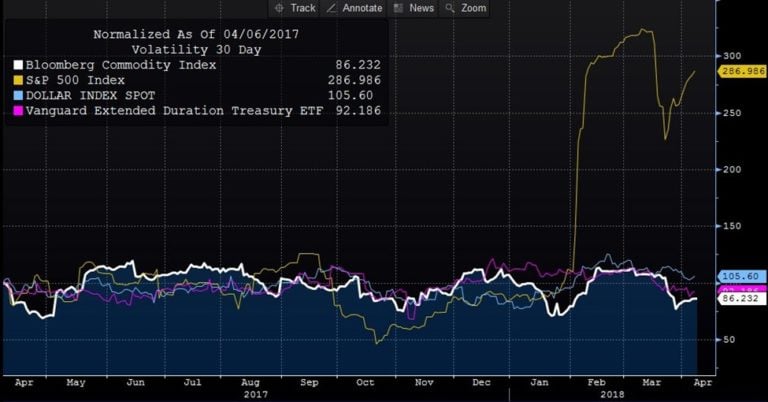 While it’s no solace to equity investors at the moment, the fact that volatility has only been in stocks in the past two months is good news. As you can see from the chart below, the S&P 500’s volatility increased in early February, but the dollar, commodities, and extended duration treasuries had normal volatility.

The other markets haven’t confirmed the uncertainty and weakness that stocks have seen in early 2018. This means there’s less of a chance equity investors are correct to be worried about the tariffs and the slowing growth. To be clear, most analysis is showing deceleration in economic growth, but there’s also a strong likelihood that stocks declined because sentiment reversed. This is a psychological retraction instead of a change in the long term fundamentals.

The chart below is an updated example of increased optimism in the junk bond market.

The spread between CCC bonds and BB bonds has fallen to the lowest level since before the spike in 2015 and 2016 which was caused by the crash in the oil market. Oil has had a good year which might explain the recent positivity in junk bonds. On the other hand, tech has played an important role in the selloff in stocks.

As you can see from the chart below, buybacks increased during the correction in February as firms took the opportunity to buy the dip in their stocks.

An increase in buybacks can act as a cushion for stocks that are free falling. Buybacks are expected to increase 26% in 2018, so that’s not the first burst in repurchases that will happen this year. One near term issue with this is firms can’t buyback stocks for about 5 weeks before earnings and 48 hours afterwards. This is the blackout period enforced by regulations. This explains why buybacks were low in late March and early April despite the renewed weakness in stocks. The aggregate buybacks will resume after earnings season ends in May.

Besides a change in sentiment and some weakness in the economic data points, another source of stress for global equities is the lack of continued upward revisions. The chart below shows the Citi Global Earnings Revision index went negative in early April for the first time since September of 2017.

To be clear, the high positivity in December and January was mostly due to the increases in U.S. firms’ profit estimates because of the tax cut. The developed world’s economic weakness, centered in Europe, hurts earnings. To be clear, this isn’t a disaster for global profits, but it is a big shift in rate of change terms.

The earnings growth in America in 2018 because of the tax cut is the biggest story of the year. With the political headlines dominating markets in the near term, it’s easy to forget about how increased earnings growth estimates have shrunk the forward PE. The chart on the left shows median revisions in bottom up S&P 500 earnings for the past 8 years.

EPS Revised Up For Once In America

The average revision in the past 30 years is down 9%. In 2018, the earnings were revised up 6%. The chart on the right shows the recent changes in the estimates for sales and EPS. Make sure to notice that each variable has a separate axis as the sales growth rate is less than half the EPS growth as margins will expand. The EPS improvement is because of the tax cut, while sales expectations gained momentum in the fall of last year. This implies the bar is high as not only is the tax cut expected to help earnings, but sales are expected to improve because of economic growth.

Earnings Surprises Are Important To Performance

The ACWI is an index which measures the global market including 23 developed markets and 24 emerging markets. The first chart shows that when the year over year point change in the earnings surprise percentage is above 0, stocks go up 6.61% per year. When the point change is below 0, the return is -0.51% per year. In the last quarter, 62.4% of firms beat estimates which is about the long term median. The bottom chart shows the historical year over year point change which was 1.7% as of the end of last year.

Will Firms Get Killed If They Miss?

One interesting question for this earnings period is if stocks will face the same punishment as usual if they miss estimates or if they get the benefit of the doubt because the bar has been raised so high. In the most recent quarter, stocks weren’t rewarded for beating earnings possibly because the great results were priced in. Another possibility is the great earnings results were temporarily ignored. The chart below shows the results for Q1 thus far.

Stocks were alone in their volatility during the first 4 months of 2018. That’s no solace for near term bullish traders looking for a reversal. Some say the Q1 earnings season will act as a catalyst for stocks. Earnings were ignored last quarter even though they were good. The bar has been raised so beating estimates will be difficult even for sales. The buybacks will come back after firms report, so that might help the market or at least prevent it from correcting further.