When I was growing up, my grandfather owned a family grocery store and butcher shop in Augusta, Kentucky.

Mains’ Grocery was situated right next to the railroad tracks on Main Street, Augusta. Trains would stop and unload sides of beef and other groceries weekly. My grandfather and great-grandfather would process the meat into steak, hamburger, sausage, etc.

It was one of those typical small-town American businesses that John Mellencamp would have sung about. Little pink houses for you and me … right?

The butcher business was mostly gone by the mid-‘80s, as customers opted for prepackaged meat. But I have fond memories of helping my grandfather stock and front his shelves.

Then the grocery business all but died when Kroger built a “superstore” at a larger town further up the road in Maysville, and SuperValu moved into Augusta proper. My grandfather held on to the business longer than he should have, selling candy and ice cream to local kids until he just couldn’t afford it anymore.

The experience of watching Mains’ Grocery die left a lasting impression on me. I have very little sympathy for large chain stores.

So when Walmart rose to power, and Kroger began complaining of unfair competition, I had little more than crocodile tears for its plight. American consumers will go where the prices are the lowest, and Kroger was failing to compete.

But Walmart clearly has some political clout, and there have been a rash of major store bankruptcies in the past year — rest in peace, Toys R Us. The big question is, should investors be worried about Amazon’s future?

A Wealth of Political Grandstanding

As I’ve said before, there is no love lost between myself and major chain stores. Mains’ Grocery was never going to be Walmart or even SuperValu.

But Walmart’s disingenuous attacks on Amazon are merely the company looking to benefit from the whims of an embattled president. Trump, for his part, is taking out his frustrations over The Washington Post (one of his biggest critics in the media) on Amazon.

Amazon CEO Jeff Bezos owns both companies, and since Trump’s continuous attacks on unfavorable “fake news” media hasn’t dented The Washington Post’s popularity, it’s time for a different tactic. Given Amazon’s dominant position in retail and impressive sustained growth, political pressure is really the only factor that could sink the company at this point.

Trump has attacked Amazon from multiple angles: what it pays in state and local taxes, its U.S. Postal Service deal and antitrust allegations.

The tax situation could create some hiccups for Amazon down the road should Congress pass some form of legislation to address the situation. But such plans have proven very unpopular with American consumers and voters in the past, and legally singling out Amazon may be difficult at best. Especially since Trump’s own tax plan helps Amazon significantly.

In the long run, analysts agree that Amazon would likely pass those costs on to consumers, while incurring minimal costs itself for implementing a broader tax collection system. Furthermore, Congress has bigger fish to fry than Amazon right now.

Trump has also threatened to renegotiate Amazon’s deal with the Postal Service. When you look at this objectively, you can see that it only hurts the post office. Could the Postal Service have negotiated a better deal?

Maybe. But, as former Postmaster General Patrick Donahoe “unequivocally stated” to UBS analysts, the Amazon deal is profitable for the Postal Service.

In fact, the biggest threat to the Postal Service right now (as well as shippers like FedEx and UPS) is that Amazon will develop its own delivery system. In other words, you’re not going to hurt Amazon (for long) by taking away its deal with the Postal Service.

The antitrust threat is likely the biggest issue facing Amazon in the current political climate. In fact, Sen. Bernie Sanders, I-Vt., agreed with Trump this week in stating that Amazon has too much power. Sanders has long been an opponent of big business.

“We’re seeing this incredibly large company getting involved in almost every area of commerce. And I think it is important to take a look at the power and influence that Amazon has,” said Sanders.

But what is Amazon’s “power and influence”? The number analysts like to throw around is that Amazon accounts for 44% of U.S. e-commerce sales.

That’s quite a number, and it figures highly in many calls for antitrust claims against Amazon. However, the company accounts for just 4.4% of U.S. retail sales, compared to Walmart’s leading 17.3% market share.

To me, that says Amazon has room for considerable growth, and that Walmart needs to step up its online game in a big way. But it doesn’t scream antitrust.

The other antitrust argument against Amazon is that it lures customers in with brand-name products, and then sells them Amazon-branded products at a considerable discount.

AmazonBasics, the company’s low-cost alternatives, are among its most popular products, after all. But Walmart, which has a much larger share of the U.S. retail market, engages in the exact same practice.

The bottom line is that Washington is ultimately not going to go after Amazon. And even if it does, it will be tied up in courts for a long, long time with no guarantee of winning.

In fact, the case right now is weighted heavily in Amazon’s favor — thanks in large part to Walmart.

As such, the recent dip in Amazon stock is a buying opportunity. 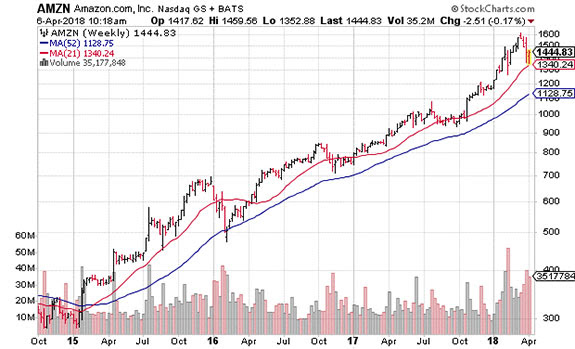 As you can see, AMZN stock is near the lower end of a long-term uptrending channel. The shares are hovering near support at their 21-week moving average, which should provide solid short-term support amid any pullback. And in the event of a continued broad market pullback, AMZN would be a screaming buy near $1,128, home to its 52-week moving average.

The fact is, once Trump finds a new target for his ire (China is figuring pretty big in those plans lately), the Amazon infatuation will blow over. With no additional support in Congress, Sanders’ concern will also take a back seat.

That leaves Amazon’s strong growth position in the U.S. and global e-commerce markets, and it will only get better from here.

Why People May Be More Interested In Electric Cars – And...

Everyone Will Be Paying For The New Public EV Chargers, Whether...