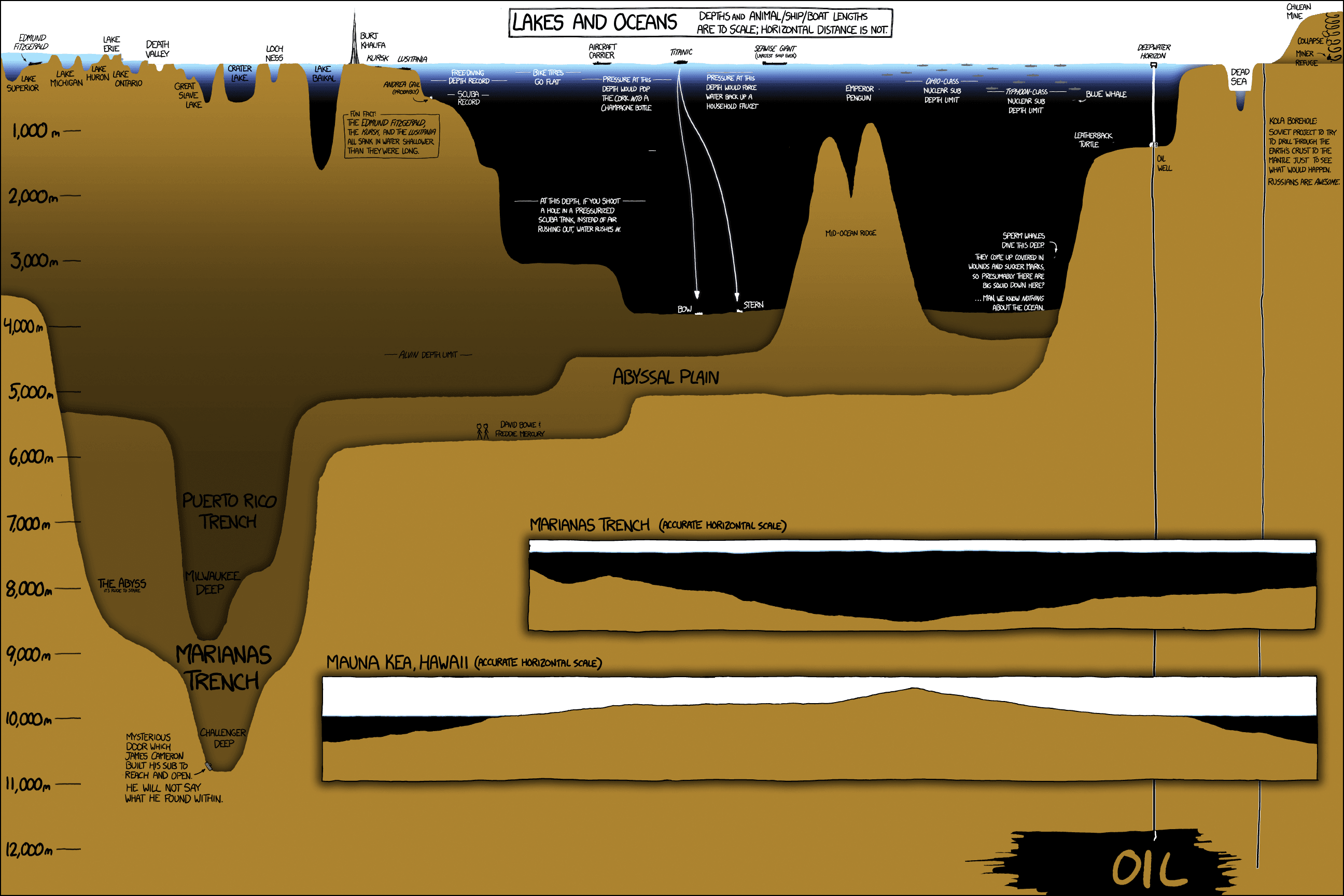 Sailors have been circumnavigating the high seas for centuries now, but what could be found beneath the sunlit surface of the ocean remained a mystery until far more recently. In fact, it wasn’t until 1875, during the Challenger expedition, that humanity got it’s first concete idea of how deep the ocean actually was.

Today’s graphic, another fantastic piece by xkcd, is a unique and entertaining look at everything from Lake Superior’s ice encrusted shoreline down to blackest, inhospitable trench (which today bears the name of the expedition that first discovered it).

The graphic is packed with detail, so we’ll only highlight a few points of interest.

Deep in Siberia, abutting a mountainous stretch of the Mongolian border, is the one of the most remarkable bodies of water on Earth: Lake Baikal. There are a number of qualities that make Lake Baikal stand out.

Depth: Baikal, located in a massive continental rift, is the deepest lake in the world at 1,642m (5,387ft). That extreme depth holds a lot of fresh water. In fact, an estimated 22% of all the world’s fresh water can be found in the lake.

Age: Baikal (which is listed as a UNESCO World Heritage Site) is estimated to be over 25 million years old, making it the most ancient lake on the planet.

Clarity: Interestingly, the water in the lake is exceptionally clear. In winter, visibility can extend over 30m (98ft) below the surface.

Biodiversity: The unique ecosystem of Lake Baikal provides a home for thousands of plant and animal species. In fact, upwards of 80% of those species are endemic, meaning they are unique to that region.

Since 1964, a hard-working research submersible named Alvin has been helping us better understand the deep ocean. Alvin explored the wreckage of RMS Titanic in 1986, and helped confirm the existence of black smokers (one of the weirdest ecosystems in the world). Though most of the components of the vessel have been replaced and upgraded over the years, it’s still in use today.

The ancient Greek word, ábyssos, roughly means “unfathomable, bottomless gulf”. While there is a bottom (the abyssopelagic zone comprises around 75% of the ocean floor), the enormous scale of this ecosystem is certainly unfathomable.

Objectively, the abyssal plain is not the prettiest part of the ocean. It’s nearly featureless, and lacks the panache of, say, a coral reef, but there are still some very compelling reasons we’re eager to explore it. Resource companies are chiefly interested in polymetallic nodules, which are essentially rich manganese formations scattered about on the sea bottom.

Manganese is already essential in steel production, but demand is also getting a substantial lift from the fast-growing electric vehicle market. The first company to find an economical way to harvest nodules from the ocean floor could reap a significant windfall.

Demand for resources can force humans into some very inhospitable places, and in the case of Deepwater Horizon, we chased oil to a depth even surpassing the famed Marianas Trench.

Drilling that far below the surface is a complicated endeavor, and when the drill platform was put into service in 2001, it was hailed as an engineering marvel. To this day, Deepwater Horizon holds the record for the deepest offshore hole ever made.

After the rig’s infamous explosion and subsequent spill in 2010, that record may stand the test of time.