W.P. Carey is a dividend achiever, which has managed to boost dividends for 20 years in a row.  The most recent dividend increase was just last week, when the Board of Directors increased its quarterly cash dividend to $1.015 per share, equivalent to an annualized dividend rate of $4.06 per share. The attitude towards distributions was summarized quite well by the statement of W. P. Carey's CEO Jason Fox:

Half Moon Capital Returns 12.2% In 2020 Despite Short Position Drag

Eric DeLamarter's Half Moon Capital produced a return of 8% net of fees in the fourth quarter of 2020, bringing the full-year return to 12.2%, according to a copy of its fourth-quarter letter, which ValueWalk has been able to review. The fund maintained an average net exposure of 45% during the period. Q4 2020 hedge Read More

"W. P. Carey has delivered consecutive annual dividend increases since going public in 1998. We are proud of our long-standing track record of providing shareholders with stable and recurring income generation across all market cycles,"

In September 2012, this dividend achiever converted from a partnership form into a real estate investment trust. After this transformation, as well as merger with one of its privately managed REIT, dividend growth has been spectacular initially.Subsequently, it to slowed down  and I expect it to be slow for the foreseeable decade.

The company not only invests in triple-net lease properties throughout the world, but it also managed privately held REITs. As a result, its sources of revenues are derived from the stable and recurring rents from those properties, which are usually leased to tenants under long-term leases. Those triple-net leases also allow for rent escalation over time. Under a triple-net lease, the tenant is required to pay all expenditures associated with maintaining and operating the property under lease.

Since 2007, FFO/share has grown by 4.70%/year. Growth in FFO will be delivered through accretive acquisitions for its own portfolio of properties, increasing rents over time, and growing assets under management which generate fees. Growth in FFO/share has decreased to 2% - 3%/year since 2014, which will limit future growth in distributions. 2018 full year AFFO guidance range of $5.30 to $5.50 per diluted share was recently announced too.

On the surface, it might not look like FFO/share has increased that much over the past decade. However, once you look at the composition, the data paints another picture. Up until 2007 – 2008, approximately 40% – 60% of FFO/share were derived from fees to manage non-traded REITs. The rest came from managing real estate holdings. As various of its CPA non-traded REIT programs came to their end, they ended up being acquired by W.P. Carey in a liquidity event, which boosted the share of rental real estate FFO/share. The portfolio management fees provide a source of income for the REIT, which is relatively stable, and allows it to spread costs over a larger asset base. In one of the company's recent presentations however, I noticed the REIT's intent to invest exclusively for WPC’s
balance sheet. This will be achieved by exiting from non-traded retail fundraising, ultimately leading to a more simplified structure.

The nice thing is that approximately 99% of leases include either fixed or CPI-based rent increases or percentage rent. The REIT has virtually no exposure to operating expenses due to nature of net leases, and they come with built-in rent increases as mentioned in the previous sentence. The weighted average lease term is 9.60 years. Approximately half of leases expire after 2025. 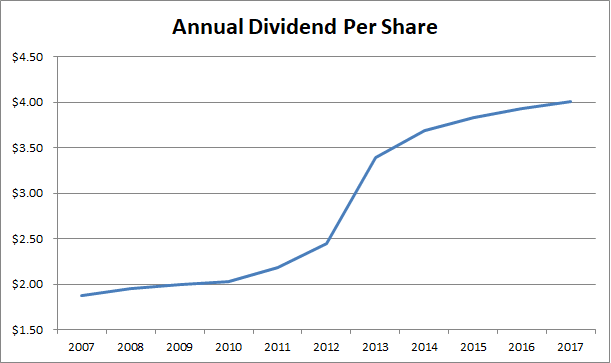 The FFO payout has been increasing from 56% in 2007 to 75.70% in 2017. This is still sustainable, but means that future growth in distributions will definitely have to come from growth in FFO, since this ratio cannot exceed 100%. I do view the dividend to be sustainable at the moment.

The portfolio occupancy has increased from 89% in 2004 to 97% in 2007, before stumbling again during the 2008 – 2009 recession and bottoming at 89% in 2010. It has been on the rebound and is approximately at 98% as we speak of. I am a little concerned about the fluctuations in occupancy/vacancy over the past decade, since it seems prone to high vacancy rates when times are tough and we are coming out of a recession. I have not seen declines of a similar nature with Realty Income (O), or National Retail Properties (NNN) for example.

The interesting part is that I obtained this information on portfolio occupancy by going through old press releases by W.P. Carey, going as far back as 2007. When I look at the investor presentations however, I never see portfolio occupancy below 96.60%. The reason for the difference is that the higher sounding occupancy amounts include both W.P. Carey owned and W.P. Carey managed properties. The lower sounding occupancy percentages include only W.P. Carey's owned properties. This is an example as to why the equity analyst needs to dig around the data, and not just rely 100% on the presentations and work done by others. The other metric I like to look at is tenant diversification. The nice thing about W.P. Carey is that it owns and manages triple-net properties in 17 countries. International accounts for approximately one third of revenues. The top 10 tenants account for 32% of revenues. The main risks behind REITs are rising interest rates, which could make cost of capital more expensive. In addition, it would make it more expensive to be rolling debt that is maturing. On the other hand, rising rates coupled with increased economic activity may be bullish for real estate, and offset the effect of increasing interest rates. In the case of W.P. Carey, there is also an additional risk with foreign revenues, whose exposure is hedged.

The current yield on W.P. Carey is 6.50%. I believe that the dividend is sustainable,  due to the nature of long-term lease agreements, and that it will likely grow slowly over time due to acquisitions and rent increases. I also like the attractive valuation at 11.70 times FFO. I find the REIT to be attractively valued today. I believe it will be able to grow distributions to shareholders over time, albeit slowly. It is probably best for a hypothetical retiree who needs high current income today.