ValueWalk
Home Info-Graphs Will This Sixteen Be Sweet? 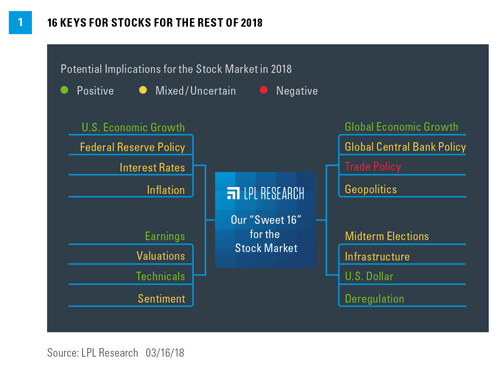 The “Sweet 16” is set. In the spirit of March Madness and an exciting NCAA college basketball tournament that has brought some historic upsets, epic comebacks, and exciting buzzer beaters, we have compiled our “Sweet 16” for the stock market. Specifically, we have identified 16 keys for stocks for the remainder of the year [Figure 1] and assessed their potential implications for the market. Collectively, we expect these drivers to push stocks higher over the balance of 2018, though we acknowledge that volatility could stay with us. We will take a deeper dive into some of these market drivers in our “Final Four” next week.

Our "Sweet 16" For The Markets

U.S. economic growth. We see U.S. gross domestic product (GDP) growth accelerating from 2.3% in 2017 to 2.75–3.0% in 2018, including a 0.25–0.50% boost from the new tax law. Though consumer spending has ticked down a bit to start 2018, we expect tax cuts, job gains, further wage growth, and positive wealth effects to support solid consumer spending growth throughout the remainder of the year. Business spending should get a boost from 100% capital expensing under the new tax law and repatriation of overseas cash. IMPLICATION=POSITIVE

Federal Reserve (Fed) policy. We continue to expect three Fed rate hikes in 2018 (including one at the March 20–21 policy meeting), but recent inflation data and comments from Fed officials suggest the odds of a fourth rate hike have increased. As long as the Fed continues its gradual pace of rate hikes, we believe the stock market can go higher over the balance of the year; however, the risk is that the Fed gets behind the curve and spooks markets with hawkish commentary. IMPLICATION=MIXED

Interest rates. Stocks have historically done well when interest rates have risen, as we expect will happen this year, particularly when the rise in rates is gradual and accompanied by stronger economic growth. Moreover, we believe interest rates at current levels are supportive of elevated stock valuations, while bonds still provide a less attractive alternative to stocks. That said, any sharp, swift moves higher would be expected to drive higher volatility. IMPLICATION=MIXED

Inflation. The pickup in inflation this year has been a source of concern for markets. We see sufficient inflation to support three rate hikes in 2018, but not enough to cause the Fed to accelerate its timetable beyond that. Our forecast for consumer inflation is 2%, though the Fed’s preferred measure (core Personal Consumption Expenditures Price Index) may end up slightly lower. We expect the impact of wage growth on corporate profit margins to be manageable. IMPLICATION=MIXED

Global economic growth. We expect global GDP growth to accelerate from 3.5% in 2017 to 3.7% in 2018, with potential upside from the impact of the new U.S. tax law. We expect the U.S. and emerging market economies to drive most of the improvement, even as global central banks begin to remove stimulus, and growth in Europe and China likely slows. Structural reforms provide possible upside globally, while a U.S.-China trade war is a key risk.
IMPLICATION=POSITIVE

Global central bank policy. The European Central Bank has slowed bond purchases and is expected to end its quantitative easing program this fall. However, with the start of rate hikes unlikely until early 2019, policy remains accommodative. The Bank of Japan has signaled that tighter policy is coming at some point, but it may not start reducing stimulus until well into 2019. Though the risk of a negative surprise is there as global policy begins to tighten, we expect the impact on global markets to be manageable. IMPLICATION=MIXED

Trade policy. We believe protectionist policy is perhaps the biggest risk facing stocks right now. The recently announced steel and aluminum tariffs may have limited economic impact, though certain companies that import steel from Europe may be hurt (Mexico and Canada are exempt). The big concern here is China’s intellectual property trade practices, which the White House sees as the biggest threat to the United States and fair trade, with a potential scope of hundreds of billions of dollars. IMPLICATION=NEGATIVE

Geopolitics. Risks currently on investors’ radar include North Korea, Syria, Iran, the Russia investigation, and terrorism, while possible cyber-attacks are also a concern, though they may not receive frequent attention. Clearly, these issues could take a turn in any direction, so market impact is uncertain, but North Korea’s recent willingness to come to the negotiating table may be a positive development. IMPLICATION= UNCERTAIN

Earnings. Corporate America produced the best earnings growth in several years during the fourth quarter of 2017 at 15%. Not to mention, 2018 saw the biggest positive revision to S&P 500 Index earnings to start a year since earnings estimate data have been collected. With economic growth improving, manufacturing activity humming, and analysts’ estimates soaring, we expect strong mid-teens earnings gains for the S&P 500 in 2018. IMPLICATION=POSITIVE

Valuations. While stock valuations are ineffective short-term timing tools, they do suggest below-average long-term stock market returns. Valuations are currently elevated with the trailing price-to-earnings (PE) ratio for the S&P 500 at around 20 and the forward PE ratio at around 17. Consider that as earnings growth potentially comes through this year, valuations will come down relative to 2018 earnings, while interest rates and inflation remain supportive. IMPLICATION=MIXED

Technicals. Although U.S. stocks have been consolidating since the end of January, the technical indicators continue to exhibit bullish momentum. The S&P 500 price remains above both short- and longer-term moving averages, while its proximity to all-time highs increases the potential for a sustained bullish trend. As long as the index remains above its 200-day moving average, the long-term trend remains bullish for stocks. IMPLICATION=POSITIVE

Sentiment. Consumer and CEO confidence are near multi-decade highs, while investor surveys are more mixed and equity fund flows remain negative. The National Association of Active Investment Managers Exposure Index has bounced off its lowest level since before the U.S. election, while the American Association of Individual Investors survey has been balanced between bulls and bears. Bottom line, there are signs of optimism, but we are not seeing the type of exuberance observed at prior stock market peaks. IMPLICATION=MIXED

Midterm elections. Historically, midterm election years have tended to be accompanied by elevated stock market volatility. During the average midterm election year, the S&P 500 experiences a drawdown of 17%, about 3% worse than the typical year. Though it is important to keep in mind that the index tends to bounce back strongly over the subsequent 12 months. Regardless, midterm elections introduce policy uncertainty and are worth watching. History (including 2010 under Barack Obama) and recent state congressional election results suggest the Republican’s majority in the House could be at risk. IMPLICATION=MIXED/UNCERTAIN

Infrastructure. We do not believe the votes in Congress are there for a substantial infrastructure spending program this year, despite it being on President Trump’s wish list. The problem is how to pay for it following the deficit spending from both the new tax law and the latest federal spending bill. Still, some spending has gotten through already and it is certainly not out of the question that we could get more, notwithstanding deficit hawks in Congress and the limitations of the public-private partnership model. IMPLICATION=UNCERTAIN

U.S. dollar. We expect the U.S. dollar to stabilize and begin to grind higher over the balance of the year as Fed policy tightens, U.S. economic growth improves, and dollars are repatriated in accordance with the new tax law. Larry Kudlow’s appointment as head of the president’s National Economic Council is also dollar positive. But for now, dollar weakness, due in part to twin deficits (trade and budget), is boosting overseas profits and investment returns for U.S. multinationals and investors. IMPLICATION=POSITIVE

Deregulation. Financial deregulation is positive for financials sector profits. The asset threshold for systemically important financial institutions may be raised from $50 billion to $250 billion, so regional banks would not be subjected to such strict capital requirements or business restrictions, and could increase lending capacity. In addition, probable paths for the Department of Labor fiduciary rule have become much friendlier to financial advisors’ businesses than the initial version. Within the energy sector, deregulation supports oil and gas producers and pipelines. IMPLICATION=POSITIVE

Pulling all of these factors together, we expect stocks to add to year-to-date gains over the balance of the year, though we acknowledge volatility could stay with us. We reiterate our year-end fair value target for the S&P 500 of 2950–3000*, as better economic and earnings growth help offset trade tensions. We will take a deeper dive into some of these market drivers in our “Final Four” next week.