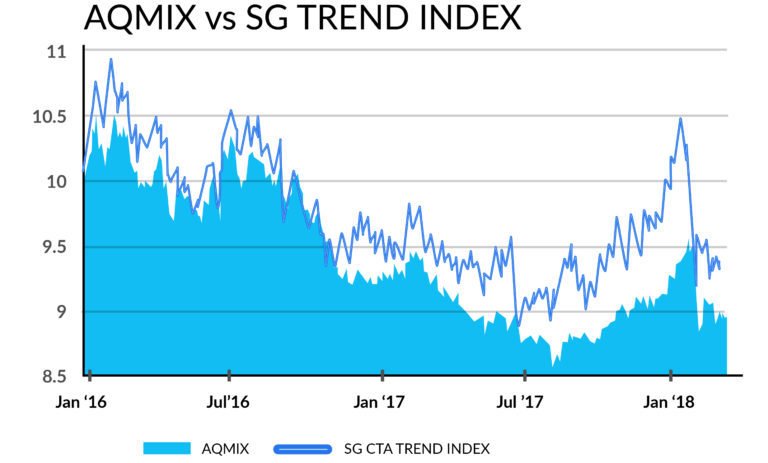 We went into depth about a year ago on what was wrong with AQR’s behemoth of a mutual fund: the AQR Managed Futures Strategy Fund (AQMIX), when their trailing 1yr returns as of last April were down about -10% and the NAV sitting around $9 years after starting out at $10 (although that doesn’t include dividends paid out). We spoke of their size, of their skew towards financials, and of the overall poor environment for their type of strategy perhaps meaning nothing was really wrong – it was just doing what it does.  And, as it turned out, all those were on point – with our contrarian headline powers a little early, but still, spot on as AQMIX rallied about +11% a few months after we wrote about it.

But while there were a few months there of – everything’s ok now –  AQMIX has interestingly fallen back to about the price it was when we covered it last year, having run up, then suffered a sharp drop alongside equities. Which again begs the question – what’s wrong with AQR?

First, there is the part about a poor overall environment for the program, which can be clearly seen in the CTA index performance tracking down and to the right alongside AQMIX like they were both heavily invested in the SNAP IPO (they weren’t). It’s more than fair to say that AQR’s managed fund has been in a pretty bad environment for a long volatility type strategy – you know, with all that record low volatility and 105 straight days without a sell-off of more than -1% in the S&P and the like. We covered all those conditions in depth and what might change in our 2018 Managed Futures Outlook, making this first blush look at ‘What’s wrong with AQR?” and easy answer = nothing’s wrong, the whole asset class has been struggling.

(Disclaimer: past performance is not necessarily indicative of future results)

But, sophisticated investors tend to judge performance in relative terms, not just in a vacuum. It is, after all, a zero-sum game in the futures world as detractors like to point out. So how has AQMIX done relative to its peers? The quick answer there = not so good. A quick glance at the Morningstar page shows returns trailing the managed futures category returns across the past 1, 3, and 5-year periods. That’s not a great look, and their Morningstar rankings reflect it – with just a 2-star rating over the last 3 years and a 3-star rating over the last 5 years.

Some might argue that they are returning less, but control risk more?  Well, we can measure that, and actually do on our website, where we rank the program against not just other mutual funds, but private funds as well in our new database across time-weighted risk and return statistics. We score AQR’s Managed Futures mutual fund with a ranking of just 2 stars, out of 5, finding it in the 4th quintile of our rankings (489th out of 747), showing that no… it hasn’t been doing a better job on a risk-adjusted basis, either.

Which brings us back to some of the points in our piece a year ago, where we covered the inherent issues in being one of the largest managed futures programs around, saying

“Is it too big?….  large sized funds concentrates the portfolio into financial markets, making it reliant on trends in currencies, bonds, and stock indices to turn a profit. And it’s that angle, more than anything else, which is “the problem” in our opinion. So not size, per se, but the portfolio construction decisions made in order to effectively achieve that size.

There was perhaps no better-proving ground for these theories than February’s sharp reversals in financial markets (more so than Corn or Cotton), which sure seemed to affect programs like AQR more than others in the space. Check out the shorter term, more commodities-focused ACXIX versus AQR to see how that looks.

Add it all up, and you have what many now consider to be the poster child for managed futures struggling a bit, both on an absolute and relative basis. And investors are noticing, because unlike last year when AQR was holding assets pretty well – there are some small cracks appearing in the asset base of AQR, with the fund off about $3 Billion from the highs seen in its semi-annual report as of mid-2016. Considering that $3 Billion is more than 95% of the rest of the industry even manages, that’s no small chunk of change. 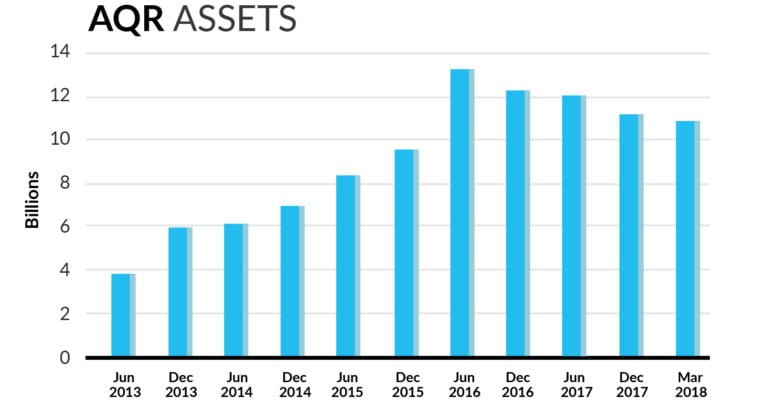 So, nothing’s wrong with AQR if you know that it’s a longer term, financial futures skewed, long volatility type program which won’t do well in periods of low volatility, or confusingly – periods of sharp spikes in volatility accompanying sharp trend reversals. The problem is, many investors don’t know the details. Many don’t know there is a bevy of different managed futures strategy types – some with a shorter term focus, some with more commodity exposure, some with decidedly not managed futures like short option profiles (@#^&% LJM) just in the mutual fund space alone.  Even more, don’t know that there’s a whole private fund and managed account side to the asset class with strategies as diverse as discretionary cattle trading to systematic AI models to crude oil calendar spreads.

All this is to say, rely on more than the fund prospectus to know what you’re investing in. There’s SMEs as they call them in the consulting world (Subject Matter Experts) that know the intricacies of futures markets like contango and deliveries and Cayman blockers and swaps, and the intricacies of the strategies employed by hundreds of professional asset managers in those markets.  We just happen to know an award winning SME in the futures space. Give them a call at 855-726-0060. They operate across private funds, mutual funds, and managed account programs and platforms – in a way that’s more like this bookstore which doesn’t show the book covers for fear of biasing purchases – than the popularity contest and shiny cover syndrome that comes with many mutual fund sales/investments.