I met yesterday with one of the speakers at my best-short-ideas conference on May 3 (only five weeks away), The Art, Pain and Opportunity of Short Selling, and he walked me through the idea he’s going to present: a $1+ billion revenue and market cap global brand name company that, he believes, based on his extensive scuttlebutt research, is a massive fraud, fabricating more than half of its reported revenues. It’s going to be one of many epic takedowns you won’t want to miss!

2) Glenn and I are planning to take our three-day Lessons from the Trenches bootcamp and one-day How to Launch and Build an Investment Fund seminar on the road, first to Trani, Italy on July 8-11 (right before the 15th Annual Value Investing Seminar on July 12-13) and then to London in September or October, depending on what’s most convenient for the many people who’ve reached out. If you might have an interest in joining us at either of these, please reply to this email and let me know so I can keep you posted. Thanks!

3) I had a small group lunch with seven guys last week and want to do more of them, so let me know if you’re interested.

As background: over the years I’ve gotten so many requests for meetings from mostly young people who are looking for career advice, want to talk stocks/value investing or, more recently, learn about the programs we’re offering at Kase Learning. I can’t recall a single meeting I haven’t enjoyed, as I really like getting to know new people and sharing some of my thoughts and experiences. In light of my busy schedule, however, I haven’t been able to take as many meetings in recent years, which I really regret.

But I tried a new idea a couple of weeks ago that worked great, so I want to do more of it: I booked table for eight at noon at a restaurant in midtown and invited seven folks with whom I’d been emailing and wanted to meet. It was a super-interesting group, we all enjoyed meeting each other, and had so many great conversations that we ended up talking for more than two hours.

So here’s my offer: if you’d like to join me for one of these lunches (my treat; mostly likely at Darbar on 152 E. 46th St.; a great lunch buffet), send me a BRIEF email introducing yourself and I’ll get back to you.

4) It pisses me off that I had to send this article to my 21-year-old daughter, who’s graduating from college in a few months and coming back to NYC to work at a large consulting firm:

Now that you’re about to enter the working world, you need to read this. Hopefully you never encounter a pig like this, but you probably will, so be aware and prepared. And let me know if it happens so I can give the guy a good beating!

More than four years later, Minshew still vividly recalls the shame and humiliation she felt leaving the Chicago apartment. “Those feelings have not completely stopped,” she admits. The experience led her to doubt herself and question her judgment. For a time, it also compromised her ability to form trusting business relationships with certain types of men. She tends to be cautious about attending small private gatherings—despite knowing that that’s where important networking and dealmaking often gets done. Kappler can relate; when she attends conferences she now heads straight back to her room rather than socialize at happy hours.

Minshew says talking about her experience with other women helped—and revealed just how many women have a similar story. Yet at the time, she didn’t feel like publicly naming Ferro was a real option. “Four years ago, I felt like I would completely be closed out of any venture capital if investors saw me as someone who named names.”

She’s coming forward now because she believes that’s beginning to change. Says Minshew: “Do I think the venture community now is fully embracing this? No. But there is a substantial minority of investors who are genuinely committed to resolving the issue and some of them are powerful enough that they’re starting to have real impact.”

Angela Saxton was a young spa attendant at a casino run by Steve Wynn in the 1990s when, she said, the mogul sexually assaulted her. One day later, the casino’s head of human resources sought her out to deliver an unequivocal message.

“You need to keep your mouth shut,” the executive, Arte Nathan, told her, according to Ms. Saxton.

Mr. Wynn resigned as chief executive of Wynn Resorts Ltd. WYNN 0.41% after The Wall Street Journal published an article in January documenting allegations against him, and he has since sold his entire 12% stake. Now regulators are investigating the company he left behind.

Descriptions of the workplace from dozens of former employees paint a consistent picture of life at Wynn properties, and of the managers Mr. Wynn hired and promoted. Complaints were often dismissed or ignored. Supervisors sometimes looked the other way when Mr. Wynn asked for the private company of workers.

Some supervisors advised employees to keep quiet to protect their jobs. Others were instructed to find damaging information on complainants as a pretext for firing them. Mr. Nathan, who handled human resources for many years at Mr. Wynn’s properties, declined to comment.

6) Speaking of sexual predators, our Predator in Chief is busy filling the swamp… Trump’s Tariffs Set Off Storm of Lobbying, www.nytimes.com/2018/03/16/us/politics/trump-tariffs-lobbying.html. Excerpt:

President Trump’s decision to impose tariffs on imported steel and aluminum has prompted a stampede by foreign countries and companies and their American partners pressing for exemptions and exclusions that could be worth billions of dollars in trade.

Corporations and foreign leaders are leaning on personal relationships in vying for meetings with White House officials, hiring lawyers and lobbyists to defend them, and drafting messages to persuade the public of the importance of free trade.

On Thursday afternoon, top oil and gas executives left an American Petroleum Institute board meeting at the Trump International Hotel in Washington and headed to the White House to personally lobby Mr. Trump, telling him that his pending steel tariffs could raise the cost of pipelines and extraction projects across the country, and discussing possible exemptions.

… “The dinner bell is ringing for the trade bar and associated lobbyists and consultants,” said Chip Roh, a former partner at Weil, Gotshal & Manges. Lawyers and lobbyists are employed on both sides, arguing for and against exemptions, he said, adding, “It creates a fertile field.”

A Fortune investigation reveals sophisticated—and often controversial—tactics that have made Elliott Management the world’s biggest, most successful activist hedge fund.

8) An interesting interview about China: China Is Not a Garden-Variety Dictatorship, www.theatlantic.com/international/archive/2018/03/china-xi-jinping-president/554795. Excerpt:

Frum: Has China now arrived at the “trap” you foresaw? Is it stuck? If yes, does any further economic progress remain possible, or will China now succumb to Japanese-like stagnation at a vastly below-Japanese level of prosperity?

Pei: In terms of systemic or institutional change, China probably entered the trap a decade ago. Although China has maintained ostensibly reasonable growth rate, it has done so mainly by increasing debt or leverage. Future economic progress is doubtful without real and radical economic change, but what has happened in the last five years under Xi, who promised radical reforms but has not delivered on his promise, is discouraging. So the prospect of a Japanese-like stagnation is real.  But because the party’s legitimacy depends on prosperity, such a scenario would be fatal to its survival.

9) And an interesting book review about China: The flimsy finances behind China’s miracle, www.reuters.com/article/us-china-economy-breakingviews/breakingviews-review-the-flimsy-finances-behind-chinas-miracle-idUSKCN1GL1Y6. Excerpt:

China’s economy has long defied the doom-mongers. In place of their ominous critique, a more constructive view of economic management in the People’s Republic has surfaced. Beijing, we are told, has found the right balance between state and market forces, and is best positioned to exploit exciting new technologies, such as big data and artificial intelligence. Politically fractured and economically sclerotic western nations can only look on in envy.

Dinny McMahon, a former financial journalist and mandarin speaker who spent many years reporting on the Middle Kingdom, doesn’t buy this line. In his view, China’s economy has spent years locked in continuous stimulus mode, accumulating bad debts and generating great economic imbalances along the way. This is not an original thesis. But it’s a welcome reality check on the current China hype. Of the many books that have observed the fragility and contradictions of China’s economic model, “China’s Great Wall of Debt” is the best. McMahon writes well, has a fine eye for detail and finds original stories to illustrate his argument

10) It’s insane how hard working South Koreans are – they make the Chinese look like slackers!

The South Korean government is taking some extreme steps to reduce the amount of time that government employees spend working. On average, government employees work 2,739 hours per year, or 1,000 hours more than other developed countries. So Seoul is simply going to shut the computers off starting the last Friday in March at 8 p.m., then at 7:30 p.m. for two Fridays in April, then at 7 p.m. every Friday in May. Here’s the kicker: 67.1 percent of government workers have asked to be exempt. [BBC]

11) The latest on the cryptocurrency bubble: 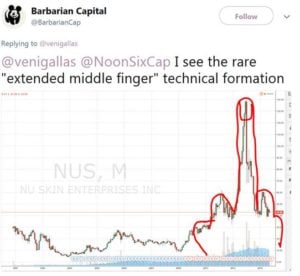