ValueWalk
Home Economics The Scary Blip Along The Way

I hated it when my mom reminded me when I was a younger, but now that I’ve survived into middle-aged adulthood, I will give you the same medicine she gave me:

As I cautioned in last month’s newsletter, “It’s important for investors to remember this pace of gains cannot be sustainable forever.” I added that there were a whole bunch of scenarios for stock prices to go down or “stock prices could simply go down due to profit-taking.”

And that is exactly what we saw. From the peak achieved in late January, stock prices quickly dropped by -12% at the low in early February, with little-to-no explanation other than a vague blame-game on rising interest rates – the 2018 yield on the 10-Year Treasury Note rose from 2.4% to 2.9%. This explanation holds little water if you take into account interest rates on the 10-Year increased from roughly 1.5% to 3.0% in 2013 (“Taper Tantrum”), yet stock prices still rose +20%. The good news, at least for now, is the stock correction has been contained or mitigated. A significant chunk of the latest double-digit loss has been recovered, resulting in stock prices declining by a more manageable -3.9% for the month. Despite the monthly loss, the subsequent rebound in late February has still left investors with a gain of 1.5% for 2018. Not too shabby, especially considering this modest return comes on the heels of a heroic +19.4% gain in 2017.

As you can see at from the 22-year stock market chart below for the S&P 500, the brief but painful drop was merely a scary blip in the long-term scheme of things. 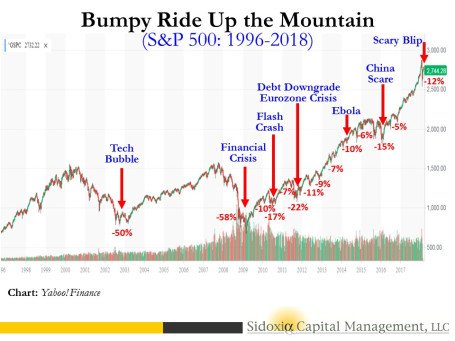 Whenever the market drops significantly over a short period of time, as it did this month, conspiracy theories usually come out of the woodwork in an attempt to explain the unexplainable. When human behavior is involved, rationalizing a true root cause can be very challenging, to say the least. It is certainly possible that technical factors contributed to the pace and scale of the recent decline, as has been the case in the past. Currently no smoking gun or fat finger has been discovered, however some pundits are arguing the popular usage of leveraged ETFs (Exchange Traded Funds) has contributed to the accelerated downdraft last month. Leveraged ETFs are special, extra-volatile trading funds that will move at amplified degrees – you can think of them as speculative trading vehicles on steroids. The low-cost nature, diversification benefits, and ability for traders to speculate on market swings and sector movements have led to an explosion in ETF assets to an estimated $4.6 trillion.

Regardless of the cause for the market drop, long-term investors have experienced these types of crashes in the past. Do you remember the 2010 Flash Crash (down -17%) or the October 1987 Crash (-23% one-day drop in the Dow Jones Industrial Average index)? Technology, or the lack thereof (circuit breakers), helped contribute to these past crashes. Since 1987, the networking and trading technologies have definitely become much more sophisticated, but so have the traders and their strategies.

Another risk I highlighted last month, which remains true today, is the potential for the new Federal Reserve chief, Jerome Powell, to institute a too aggressive monetary policy. During his recent testimony and answers to Congress, Powell dismissed the risks of an imminent recession. He blamed past recessions on previous Fed Chairmen who over enthusiastically increased interest rate targets too quickly. Powell’s comments should provide comfort to nervous investors. Regardless of short-term inflation fears, common sense dictates Powell will not want to crater the economy and his legacy by slamming the economic brakes via excessive rate hikes early during his Fed chief tenure.

Despite the heightened volatility experienced in February, I remain fairly constructive on the equity investment outlook overall. The recently passed tax legislation (Tax Cuts and Job Act of 2017) has had an undeniably positive impact on corporate profits (see chart below of record profit forecasts – blue line). More specifically, approximately 75% of corporations (S&P 500 companies) have reported better-than-expected results for the past quarter ending December 31st. On an aggregate basis, quarterly profits have also risen an impressive +15% compared to last year. When you marry these stellar earnings results with the latest correction in stock prices, historically this combination of factors has proven to be a positive omen for investors.

Despite the rosy profit projections and recent economic strength, there is always an endless debate regarding the future direction of the economy and interest rates. This economic cycle is no different. When fundamentals are strong, stories of spiking inflation and overly aggressive interest rate hikes by the Fed rule the media airwaves. On the other hand, when fundamentals deteriorate or slow down, fears of a 2008-2009 financial crisis enter the zeitgeist. The same tug-of-war fundamental debate exists today. The stimulative impacts of tax cuts on corporate profits are undeniable, but investors remain anxious that the negative inflationary side-effects from a potential overheating economy could outweigh the positive economic momentum of a near full-employment economy gaining steam.

Rather than playing Goldilocks with your investment portfolio by trying to figure out whether the short-term stock market is too hot or too cold, you would be better served by focusing on your long-term asset allocation, and low-cost, tax-efficient investment strategy. If you don’t believe me, you should listen to the wealthiest, most successful investor of all-time, Warren Buffett (The Oracle of Omaha), who just published his annual shareholder letter. In his widely followed letter, Buffett stated, “Performance comes, performance goes. Fees never falter.” To emphasize his point, Buffett made a 10-year, $1 million bet for charity with a high-fee hedge fund manager (Protégé Partners). As part of the bet, Buffett claimed an investment in a low-fee S&P 500 index fund would outperform a selection of high-fee, hot-shot hedge fund managers. Unsurprisingly, the low-cost index fund trounced the hedge fund managers. From 2008-2017, Buffett’s index fund averaged +8.5% per year vs. +3.0% for the hedge fund managers.

During scary blips like the one experienced recently, lessons can be learned from successful, long-term billionaire investors like Warren Buffett, but lessons can also be learned from my mother. Do yourself a favor by getting your investment portfolio in order, so my mother won’t have to say, “I told you so.”

This article is an excerpt from a previously released Sidoxia Capital Management complimentary newsletter (March 1, 2018). Subscribe on the right side of the page for the complete text.