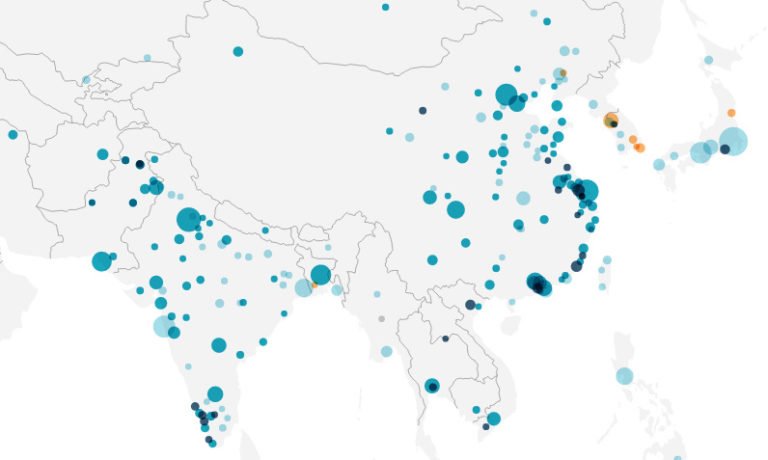 Thanks to drastic increases in crop yields and the falling need for manual farm labor, a mass migration towards cities started in the years following the Industrial Revolution.

This phenomenon first originated in developed economies as people moved to work in factories that produced consumer goods at a scale never before seen. Then in the 1950s, developing economies started to follow suit.

The results have been staggering, and today a country like China has at least 35 massive cities that each have an economic output comparable to entire countries.

After many decades of urbanization, the portion of people living in urban areas has surpassed the total rural population. This happened in 2007, and we are now in the first window in human history in which more people are city dwellers.

So what cities are the meccas for urban migration today? And which are falling out of favor?

The following interactive and zoomable map was put together by Datawrapper, using data from the United Nations.

It lists 500 cities with over 1 million people, and is shaded based on annualized population growth rate between 2000 and 2016. Percent growth corresponds with darker shades of teal, while orange symbolizes negative growth over the timeframe.

It’s strongly recommended to explore the map by zooming in on particular regions. Highlighting cities themselves will give you population details for 2000 and 2016, as well as an annualized percentage growth rate.

Here are some areas we thought were worth looking at in more detail:

North America is mostly what one may expect. The biggest cities (NYC, LA, Chicago, Toronto) aren’t changing too fast, while some cities in the Rust Belt (Detroit, Cleveland, Pittsburgh) have slightly negative growth rates. Austin, TX and Charlotte, NC seem to be the fastest growing cities in the U.S., overall.

Colombia’s Bogotá stands out as the city in South America growing at the most blistering pace. It gained 3.6 million people in the 2000-2016 year period, good for a 2.8% annual growth rate.

These two populous countries are home to many of the dark-shaded circles on the map. It’s worth looking at an additional screenshot here (just in case if you haven’t zoomed in above). 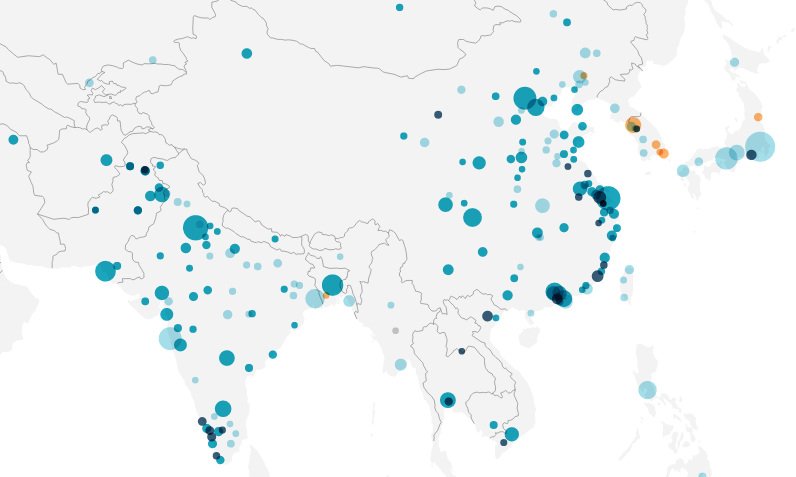 Look at the coast of China – it’s dotted with rapidly expanding cities. Incredibly, in the 16-year span of data, some of these cities have doubled in terms of population. Others like Xiamen have tripled in size. Shanghai alone has gained 10.5 million people in this span of time.

In India, the fastest growing cities are in the south, where there are at least 10 large cities that have roughly doubled in size. Delhi, which is in the north, has added nearly 11 million inhabitants over the same stretch.

In Africa, we see the names of many of the cities that are projected to be the world’s largest megacities by 2100.