ValueWalk
Home Info-Graphs The Employment Report Does Little To Defray The Likelihood Of Higher Wage... 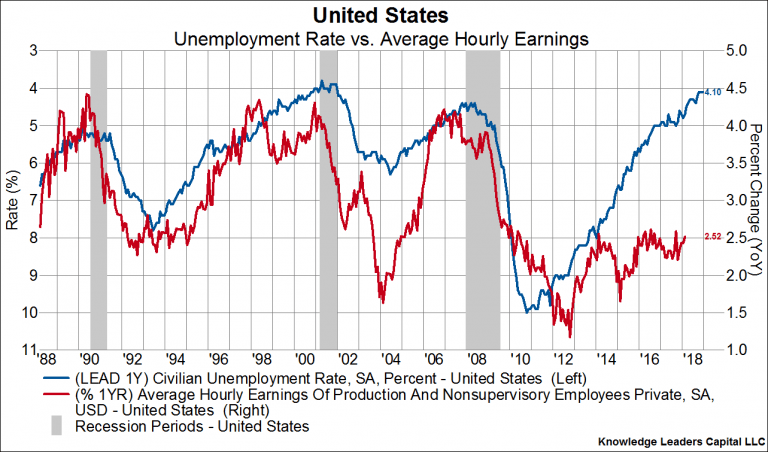 Today’s unemployment that featured above trend employment growth, a tick up in the participation rate, a flat unemployment rate and a little less wage growth compared to last month is being met with applause from the equity market. After all, it was last month’s surge in hourly earnings that was blamed for the speedy equity and bond market correction, something this report visibly lacks. But, just because we didn’t get another surge in earnings this month doesn’t mean it isn’t coming. Indeed, numerous indicators that lead wage growth by about a year are signaling an acceleration in wage growth in the coming months. Some of those indicators that lead wage growth include the unemployment rate, small business hiring plans, and the output gap. We’ll take them one-by-one below. This third chart compares wage growth (blue line, left axis) to the output gap (red line, right axis). The output gap measures whether an economy is operating below, at, or above potential growth. A positive output gap (something that occurred beginning in early 2017) is an indication that the economy is running at a faster pace than it is able without igniting some pricing pressure. The output gap leads wage growth by about five quarters, and its recent uptick portends higher wages in the coming months. So, while this latest employment report is rather unoffensive in every way, we should be careful to not extrapolate this sort of not to hot, not to cold type of reading.