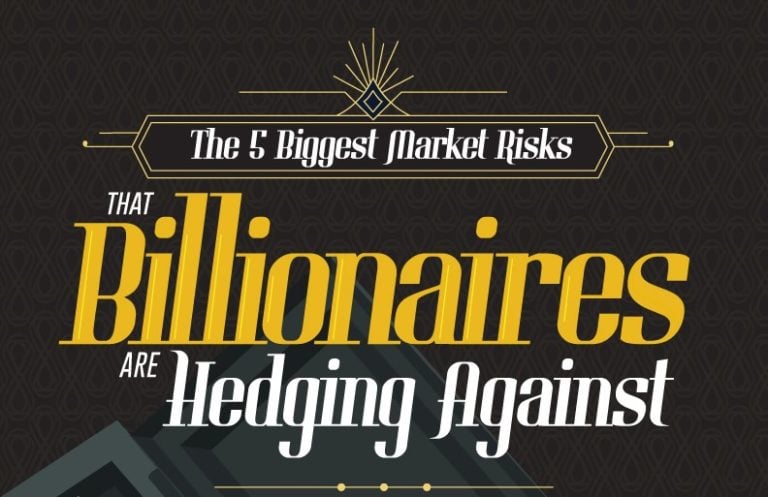 If you’ve studied the history of markets, you know that sentiment can turn on a dime.

Whether it is an unexpected wake-up call like the collapse of Lehman Brothers, or simply the popping of a bubble that’s blown too big, the tides can shift in a matter of hours or days.

No one knows this better than the world’s most elite investors – and that’s why billionaires like Warren Buffett, Ray Dalio, Bill Gross, Paul Tudor Jones II, and Carl Icahn take the necessary precautions available to protect themselves from these big and unexpected market swings.

5 Risks That Keep Billionaires Up at Night

Today’s infographic comes to us from Sprott Physical Bullion Trusts and it highlights some of the potential market risks that could move markets, as well as how these elite investors are hedging to protect their fortunes.

While these are all market risks that billionaires are concerned about, it’s worth mentioning that these kinds of events are almost impossible to predict or forecast.

Despite the unlikelihood of them occurring, they all have the potential to impact markets – and that’s why elite investors are always active in hedging their investments.

A Note on Net Worth

Why are billionaires so concerned – after all, don’t they have lots of cash to protect themselves?

It’s worth noting that on a relative basis, billionaires often aren’t very liquid at all. In fact, the majority of their net worth is usually tied up in business interests or other investments, and the value of these assets fluctuate with the market.

That means a big market movement could wipe out millions or billions of dollars in the span of hours. For an extreme example of this, just look at Mark Zuckerberg, who saw his net worth plunge $6 billion in just one day in the wake of his company’s most recent privacy crisis.

Here are the risks keeping the world’s most elite investors up at night:

1. The Return of Inflation

Have central banks mastered monetary policy- or is there a chance that inflation could come back with a vengeance? After trending down for decades, billionaire Carl Icahn says that creeping inflation could lead to higher interest rates, which he thinks would be “difficult to deal with for the market”.

The most recent number for global debt is at $233 trillion, and about $63 trillion of that is central government debt.

Bill Gross, the “Bond King”, says that our system is dependent on leverage, and the critical values that affect this are debt levels, availability, and the cost of leverage. He said in a recent interview that “When one or more of these factors deteriorates, the probability of the model’s success and stability go down”.

In a recent interview, hedge fund billionaire Paul Tudor Jones II predicted a price plunge, saying that “Bonds are the most expensive they’ve ever been by virtually any metric. They’re overvalued and over-owned.”

Elite investors continue to worry about geopolitical surprises that could impact markets, such as a trade war with China. We looked at this broad topic in depth in our previous infographic on geopolitical black swans.

Lastly, many world-class investors are also concerned about the unintended aftereffects of massive central bank programs in recent years. With $13 trillion in total QE pumped into global markets since 2008, investors are worried about how much room that central banks have left to maneuver in a situation where the central bank “tool kit” is needed.