ValueWalk
Home Info-Graphs The 25 Countries With The Most Billionaires 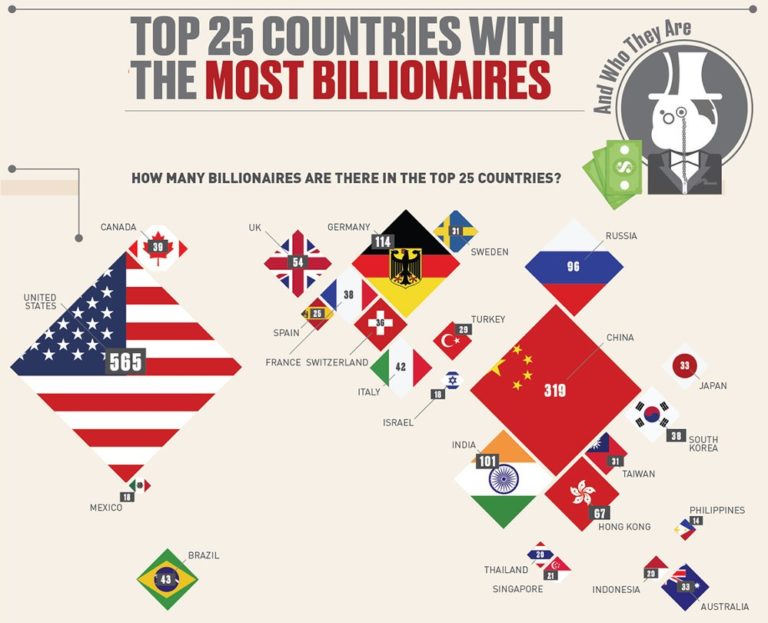 There are roughly 36 million millionaires in the world.

That means if you meet someone from the global population at random, there’s a 1 in 200 chance that they could be a millionaire – this makes for surprisingly good odds.

However, the billionaire on the other hand is a much rarer breed. According to Forbes, there are just over 2,000 billionaires in existence, making up just 0.00003% of the global population.

Where do these people live, and what countries have the highest concentrations of them as citizens?

25 Countries That are Rich in Billionaires

Today’s infographic comes to us from TitleMax, and it shows the 25 countries with the most billionaires in them. It also covers the richest person in each of these countries, as well.

Here is the list of countries, sorted by the number of billionaires:

The United States has the most billionaires in total with 565.

In second place is China (319) – a country that is adding billionaires at a rapid pace, but also losing some of its ultra-rich population to capital flight.

Although the United States has the most billionaires by a large margin, the country ranks 6th in terms of billionaire concentration.

For comparison’s sake, if Mainland China could somehow have the same rate of billionaire occurrences as Hong Kong, the country would amass 12,575 billionaires – more than six times the total amount in the world that currently exist!

With only roughly 2,000 billionaires scattered throughout the world, it’s estimated that there are over 100+ countries and dependencies that actually have zero billionaires as citizens. For example, Haiti, Lithuania, Ethiopia, Belarus, and Andorra are just a few places that have millionaires, but no billionaires.

As for countries that made the above list, India and Indonesia are pretty scarce in terms of their billionaire concentrations – if you were to hit the street in these countries, the odds are 1 in 13 million that a random person would be a billionaire.