In my last post, I valued Spotify, using information from its prospectus, and promised to come back to cover three loose ends: (1) a pricing of the company to contrast with my intrinsic valuation, (2) a valuation of a Spotify subscriber and, by extension, a subscriber-based valuation of the company, and (3) the value of big data, seen through the prism of what Spotify can learn about its subscribers from their use of its service, and convert to profits.

I won't bore you by going through the full details of the contrast that I see between pricing an asset and valuing it, since it has been at the heart of so many of my prior posts (like this, this and this). In short, the value of an asset is determined by its expected cash flows and the risk in these cash flows, which you can estimate imprecisely using a discounted cash flow model. The price of an asset is based on what others are paying for similar assets, requiring judgments on what comprises similar.  My last post reflected my attempt to attach an intrinsic value to Spotify, but the pricing questions for Spotify are two fold: the companies that investors in the market will compare it to, to make a pricing judgment, and the metric that they will base the pricing on.

Let's start with the simplest version of pricing, a one-on-one comparison. With Spotify, the two companies that are likeliest to be offered as comparable firms are Pandora, a company that is in the same business (music streaming) as Spotify, deriving its revenues from advertising and subscription, and Netflix, a company that is also subscription-driven, and one that Spotify would like to emulate in terms of market success. Since Spotify and Pandora are reporting operating losses, there are only three metrics that you can scale the pricing of these companies to: the number of subscribers, total revenues and gross profits. I report the numbers for all three companies in the table below, in conjunction with the enterprise values for Pandora and Netflix:

To illustrate the process, I price Spotify, relative to Pandora and based on subscribers, by first computing the enterprise value/subscriber for Pandora (EV/Subscriber= 1135/74.70 = 15.19). I then multiply this value by Pandora's total subscriber count of 159 million to arrive at a pricing of $2,416 million for Spotify. I repeat this process for Netflix, and then repeat it again with both companies, using revenues and gross profit as my scaling variables. The table of pricing estimates that I get for Spotify explains why those who are bullish on the company will try to avoid comparisons to Pandora and encourage comparisons to Netflix. If, as is rumored, Spotify's equity is priced at between $20 and $25 billion, it will look massively over priced, if compared to Pandora, but be a bargain, relative to Netflix. As you can see, each of these comparisons has problems. Spotify not only has a more subscription-based revenue model than Pandora, yielding higher overall revenues, but its more global presence (than Pandora) has insulated it better from competition from Apple Music. Netflix has an entirely subscription-based model and generates more revenues per subscriber, while facing less intense competition.  The bottom line is that the pricing range for Spotify is wide, because it depends on the company you compare it to, and the metric you base the pricing on. That may come as no surprise for you, but it will explain why there will wide divergences in pricing opinion when the stock first starts to trade, resulting in wild price swings. If you are not adept at the pricing game, and I am not, you should stay with your value judgment, flawed though it might be. I will consequently stick with my intrinsic value estimate for the equity in the company.

Last year, I did a user-based valuation of Uber and used it to understand the dynamics that determine user value and then to value Amazon Prime. That framework can be easily adapted to value Spotify subscribers, both existing and new. To value Spotify's existing subscribers, I started with the base revenue per subscriber and content costs in 2017, made assumptions about growth in each item and used a renewal rate of 94.5%, based again upon 2017 numbers (all in US dollar terms):

Note that revenues/subscriber grow at 3% a year, faster than the growth rate of 1.5%/year in content costs, reducing content costs to 70% of subscriber revenues in year 10, consistent with the assumption I made in the top down valuation in the last post. The value of a premium subscriber, allowing for the churn in subscriptions (only 43% make it through 15 years) and reduced content costs, is $108.65, and the total value of the 71 million premium subscriptions works out to about $7.7 billion.

To estimate the value of new users, I first had to estimate how much Spotify was spending to acquire a new user. To obtain this value, I took the total marketing costs in 2017 (567 million Euros or $700 million) and divided that by the number of new subscribers added in 2017:

In valuing the cash flows from new users, I use a 10% US$ cost of capital, the 75th percentile of global companies, reflecting the higher risk in this component of Spotify's value, and derive a value of about $18 billion for new users.

Spotify does get about 10% of its revenues from advertising, and I will assume that this component of revenue will persist, albeit growing at a lower rate than premium subscription revenues; the revenues will grow 10% a year for the next ten year and content costs attributable to these revenues will also show the same downward trend that they do with premium subscriptions. The value of the advertising revenues is shown to be about $2.9 billion:

The final component of value is mopping up for costs not captured in the pieces above. Specifically, Spotify has R&D and G&A costs that amounted to 660 million Euros in 2017 (about $815 million), which we assume will grow 5% a year for the next 10 years, well below the growth rate of revenues and operating income, reflecting economies of scale. Allowing for the tax savings, and discounting at the median cost of capital (8.5%) for a global company, I derive a value for this cost drag: 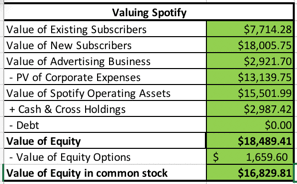 The operating asset value is about $3.6 billion lower than the value that I obtained in my top-down DCF, and there are three reasons for the difference. The first is that I did not incorporate the benefits of the losses that Spotify has to carry forward (approximately $1.7 billion) in my subscriber-based valuation, with the resulting lost tax benefit at a 25% tax rate, of about $300 million. The second reason is that I used a composite cost of capital of 9.24% on all cash flows in top down valuation, whereas I used a lower (8.5%) cost of capital for existing users and a higher (10% cost of capital) for new users; that translates into about $600 million in lower value. The third reason is that I assumed that composite cash flows for Spotify would grow at 2.85% a year forever, while I capped the growth rate in new users to 1%, a more realistic number since inflation cannot help me on user count; using a 2.85% growth rate in the number of users after year 10 adds $2.1 billion in value. The value of equity in common stock, the number that will be most directly comparable to market capitalization on the day of the offering, is $16.8 billion.

There is one final component to Spotify's value that I have drawn on only implicitly in my valuations and that is its access to subscriber data. As Spotify adds to its subscriber lists, it is also collecting information on subscriber tastes in music and perhaps even on other dimensions. In an age where big data is often used as a rationale for adding premiums to values across the board, Spotify meets  the requirements for a big data payoff, listed in this post from a while back. It has exclusivity at least on the information it collects from its subscribers on their musical tastes & preferences and it can adapt its products and services to take advantage of this knowledge, perhaps in helping artists create new content and customizing its offerings. That said, I do no feel the urge to add a premium to my estimated value for three reasons:

The big data debate has just begun, and I am not sure how it will end. I personally believe that we are too far gone down this road to go back, but there may be some buyers' remorse that some of us are feeling about having shared too much. If that translates into much stricter regulations on data gathering and a reluctance on our part to share private data, it would be bad news for Spotify, but it would be worse news for Google, Facebook, Netflix and Amazon. Time will tell!