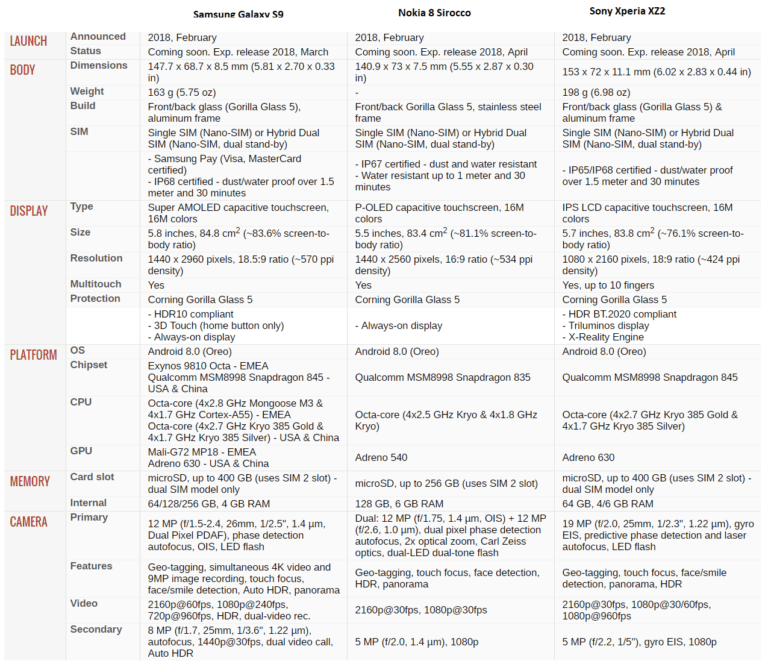 Mobile World Congress is always one of the most anticipated events of the year when it comes to smartphone reveals and releases. Three of the major announcements at the MWC included the Samsung Galaxy S9, the Nokia 8 Sirocco, and the Sony Xperia XZ2. How do these new phones stack up against one another?

The Samsung Galaxy S9 is generally covered the most in terms of exposure, as Samsung is the top dog when it comes to Android flagships. The Nokia 8 Sirocco and the Sony Xperia XZ2 both have something to offer as well, but can they steal the spotlight when all eyes are on the latest and greatest from a technology giant like Samsung?

While the Samsung Galaxy S9 is quite similar to the S8 in terms of design and features – a sticking point that many have been upset about – the Sony Xperia XZ2 represents a large shift in design philosophy from Sony’s mobile division. Nokia is also making headlines with the Nokia 8 Sirocco, representing the first high-end Android phone we’ve seen from this once-celebrated phone manufacturer. All three phones do a solid job of providing a high-quality Android experience, but they do have their differences which make them best suited for different users.

Design, while not having a significant impact on the performance of the phone, is a significant part of what makes a high-end flagship stand apart from the rest. The Samsung Galaxy S9, Sony Xperia XZ2, and the Nokia 8 Sirocco all have a Gorilla Glass front and back, with a central metal core – as is standard for most luxury phones.

As far as physical design goes, you’ll find that both the Galaxy S9 and Nokia 8 Sirocco look quite similar. The Sony Xperia XZ2, on the other hand, is physically larger than the other two with a more traditional flat display rather than the curved design we’ve seen from many phones as of late. While the Sony Xperia XZ2 does have a larger screen – a feature which may be important to many buyers – the flat and square-ish design does feel a lot more dated when compared to that of the Nokia 8 Sirocco and the Samsung Galaxy S9.

The display of a smartphone is also always a major concern – especially considering how many people are using their phones as their primary way of watching their favorite videos and shows. Both the Galaxy S9 and the Nokia 8 Sirocco have a similar OLED display, with the Galaxy S9 offering AMOLED technology and the Sirocco featuring pOLED. Nokia offers high Quad HD resolution.

In terms of size, the Nokia 8 Sirocco screen is the smallest of the two, coming in at just 5.5-inches.

The Sony Xperia XZ2 maintains an LCD display, which means we should see a less striking image quality with fewer details than we’ll see on the Samsung Galaxy S9 and Nokia 8 Sirocco.

Overall, it’s a toss-up between the Samsung Galaxy S9 and Nokia 8 Sirocco when it comes to display quality, but we feel that the S9 has a slight edge.

Performance is perhaps the most important factor to consider when buying a new phone, as having a device that can keep up under a heavy load is important when deciding between flagships. Both the Sony Xperia XZ2 and the Samsung Galaxy S9 feature the Qualcomm Snapdragon 845 – the latest and greatest in terms of processors. The Nokia 8 Sirocco, on the other hand, sticks with last generation’s chip – a decision that will certainly hamper its performance when compared to powerhouses like that from Sony and Samsung. The Sirocco does have the edge in terms of RAM with 6GB vs the 4GB we saw in the other two phones, but that may not be enough to make up for the older processor.

Nokia does feature the largest battery at 3260mAh, but that’s not a significant difference from Sony’s 3180mAh capacity. Samsung has the lowest capacity of the three at 3000mAh, but all three phones should last a full day on a single charge.

With a tagline “The Camera. Reimagined,” it’s clear that Samsung’s main goal with the release of their new phone is to provide improvements over the predecessor in terms of image quality and camera performance. With the highest aperture we’ve seen on a phone with f/1.5, it will perform admirably in low-light conditions. The adjustable single lens can also cycle up to f/2.4, which will give great quality images in regular light as well.

The Nokia 8 Sirocco features the only camera out of the three with a dual-lens setup, but the previous generation had questionable performance. While the specifications seem reasonable, we’ll have to get our hands on the new device before we can really determine how well it performs in a variety of conditions.

Sony as a company has a lot of experience when it comes to cameras, and the Sony Xperia XZ2 is no exception. As the only phone out of the three with HDR video capture, we should see the most gorgeous video recordings out of Sony’s device when comparing the three. In general, the camera specifications are exceptional and may even be able to compete with Samsung.

Overall, both the Samsung Galaxy S9 and the Sony Xperia XZ2 are shaping up to be excellent performers. The Nokia 8 Sirocco also has a lot of potential, but we’ll have to wait and see if it can improve on the mistakes of its predecessor.

Overall, while all three phones excel in various areas, we feel that the Samsung Galaxy S9 is the best of these three upcoming flagships. With very few flaws and excellent performance in a number of metrics, it’s definitely difficult to beat.