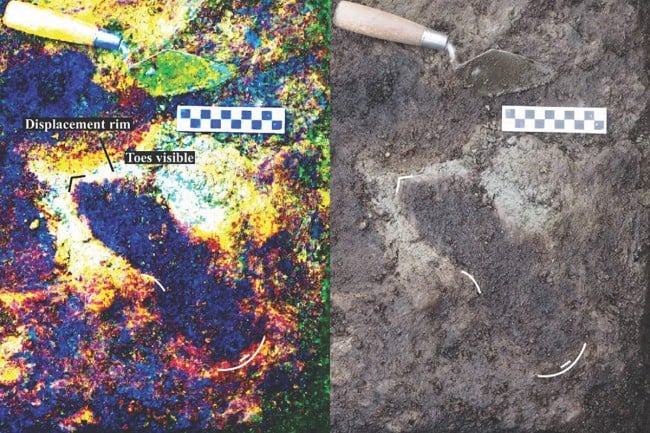 When did early humans really migrate to North America? It’s still a puzzle. However, researchers have discovered what they believe to be the oldest human footprints in North America. The footprints are believed to be about 13,000 years old. With the evidence of humans crossing American land, researchers can continue studying the chronology between early humans moving to America from Asia.

The oldest human footprints in North America were revealed on Calvert Island, part of British Columbia. According to the researchers, they were made 13,000 years ago. Scientists and archaeologists are still working to understand the human migration from Asia to North America. This discovery allows them to suggest that early humans lived by the coast after they migrated.

Researchers from the Hakai Institute and University of Victoria in Canada are trying to get an accurate answer to this puzzle. They noted their findings in a study published in PLOS ONE. In the study, they detailed the discovery of footprints around Canada’s Pacific area. Scientists estimate that this vast migration occurred when the last ice age still existed. They believed humans used a land bridge to cross over to America.

“We were actively searching for archaeological sites along this lower shoreline when we came across the footprints. It is likely the tracks were left in an area that was just above the high tide line 13,000 years ago,” Dr Duncan McLaren, first author of the research from the University of Victoria in British Columbia and the Hakai Institute on Calvert Island told The Guardian.

The group that migrated to the coast of British Colombia, probably made it down into North America after some time. This same location is no longer just a beach but it’s covered in dense forest that can be accessed only with boats.

During the last ice age, the sea level was between 6 and 10 feet lower as opposed to today. Scientists discovered 29 footprints belonging to humans. There were also three different sizes of feet. With the use of radiocarbon dating, they estimate that the footprints were likely 13,000 years old.

After an analysis of the prehistoric footprints, researchers concluded that they could have belonged to two adults and a child, also noting that all three early humans were barefoot. The first group of footprints of this kind were found back in 2014. According to the researchers, the footprints were left in clay which preserved them until today.

The last ice age ended around 11,000 to 14,000 years ago. If researchers continue to find human footprints in that area, it will strengthen their hypothesis of human migration from Asia to the American continents. One hypothesis suggests that early humans got to North America crossing the Kelp Highway, which had underwater kelp forests which created an ecosystem that helped humans travel towards the North Pacific coast. Various plants and animals thrived along the Kelp Highway.

According to this study, early humans traveled near glacier-free areas between the sea and ice, using watercraft to travel along the coast. That would explain the oldest human footprints in North America. What probably encouraged humans to keep moving was the flourishing plant world and animals that thrived in the region.

However, during that time, not everyone walked barefoot. Humans covered their feet with animal skins that would help them walk. Also, this study doesn’t show what those early human looked like nor reveals anything about their lifestyle.