Thai Tap Water Supply Public Company Limited produces and distributes tap water to the PWA, which is the source of 98% of TTW’s revenue, including its 98%-owned subsidiary, Pathum Thani Tap Water Company Limited. 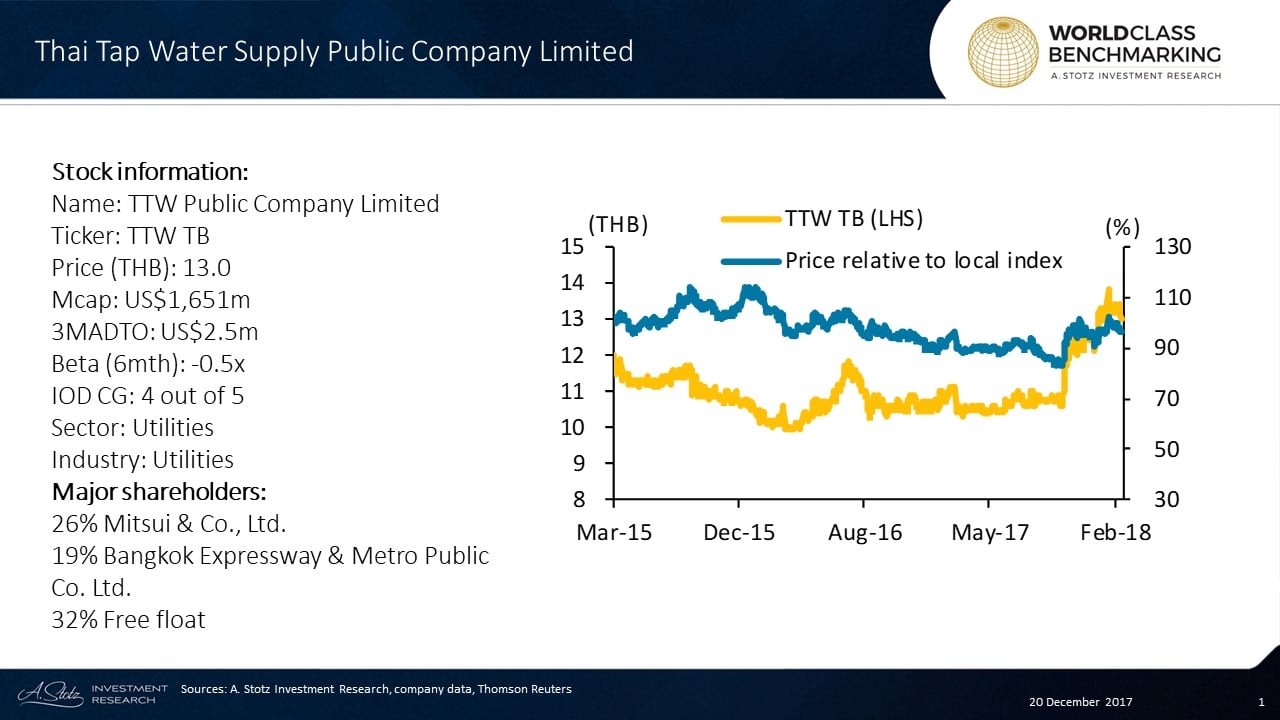 Sio Partners, the specialist healthcare hedge fund, returned 0.9% net of fees and expenses in January, compared to a loss of -1% for the S&P 500 and a gain of 1% for the MSCI World Healthcare Index. Long investments contributed 12.6%, according to a copy of the firm's letter, which ValueWalk has been able to Read More

Under concession from the Provincial Waterworks Authority, TTW runs water to businesses in Nakhon Pathom (Nakhon Chai Si, Sam Phran and Phuttamonthon districts) and Samut Sakhon (Mueang and Krathum Baen districts) provinces with a capacity of 440,000 m3 per day. The water treatment project in Krathum Baen completed in 2017 added 100,000 m3. 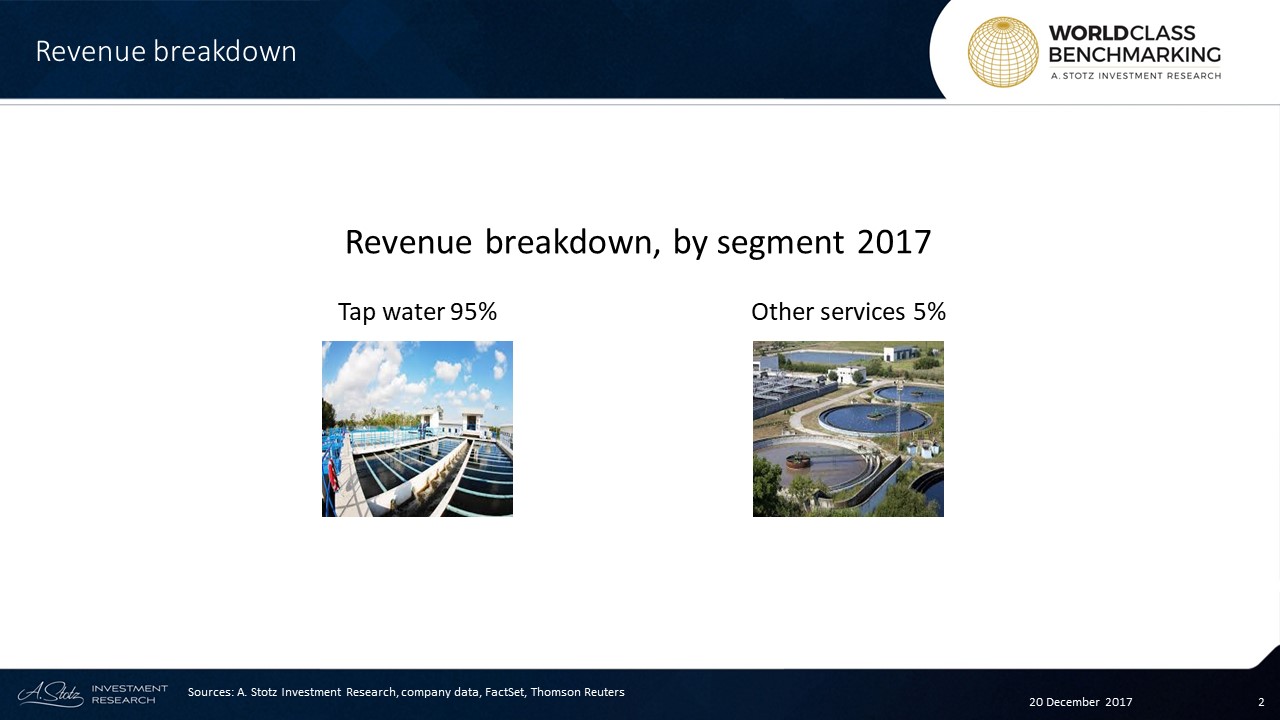 TTW will build a new tap water plant with the total capacity of 40,000 m3 per day in Mawlamyine in Myanmar. This is going to help TTW gain first footprint and benefit from the quickly developing local economy in the future while it is estimated that around 18m people, an equivalent of 33% of the total population in Myanmar, do not have access to clean water.

Thanong Bidaya has served as an Independent Chairman of TTW since 2008. He currently holds Chairmanship to a number of listed and non-listed companies. He has also served as Minister of Finance and Minister of Commerce in the past. His education consists of Bachelors degree in Economics from Yokohama National University in Japan along with Masters in Economics and Ph.D. in Management from Northwestern University in the US. 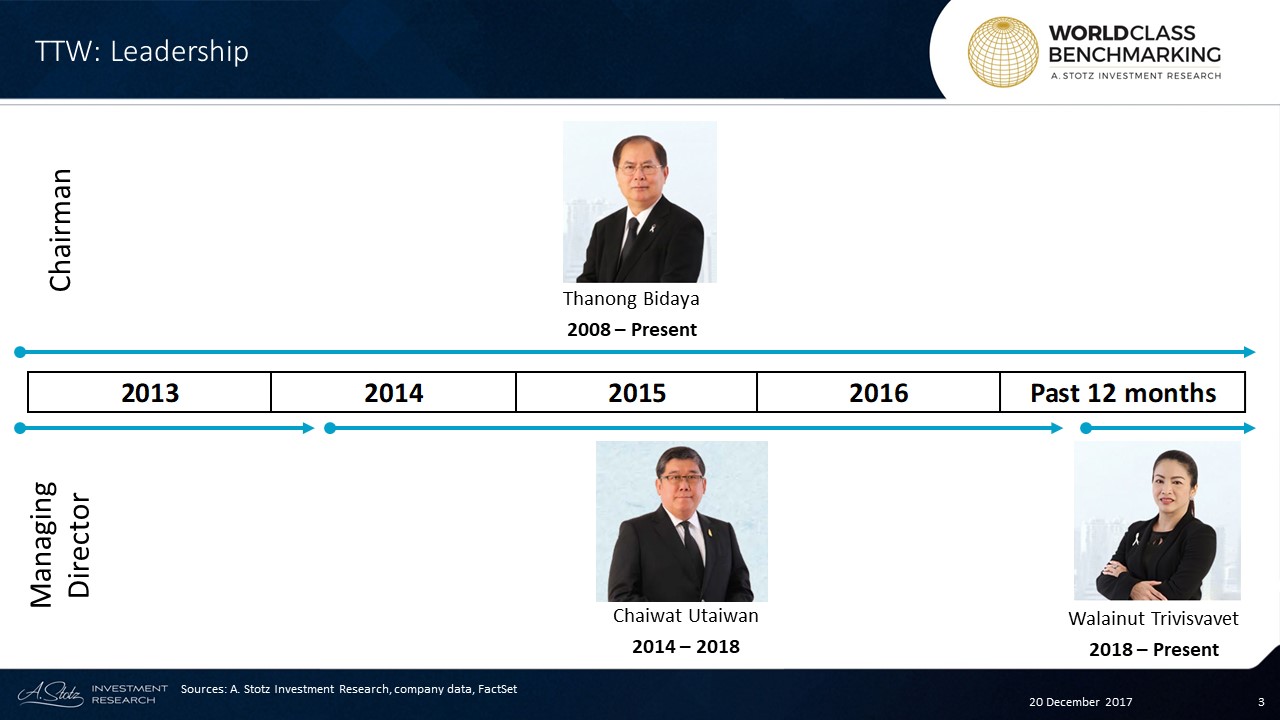 Walainut Trivisvavet has recently been appointed as the Managing Director on 1st March 2018 after having previously worked as the Assistant Managing Director: Admin at TTW. She has received multiple certification programs in complements to her B.B.A and M.Sc. from Assumption University, Thailand and Boston University, US respectively. She has had numerous managerial positions in other companies as well.

While Growth has mostly been average or below, Profitability has ranked the best since 2013 with only a slight decline to #2 in the past 12 months. 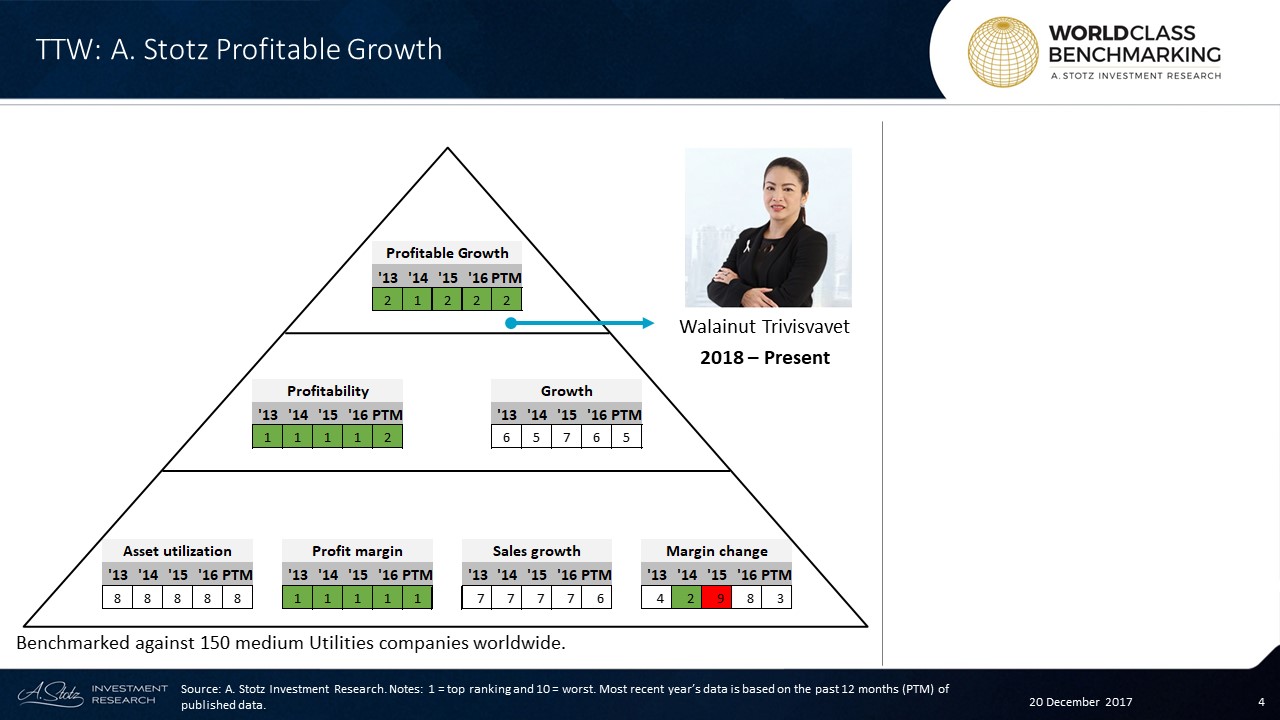 Both Asset utilization and Profit margin have had no change in their ranks since 2013. Asset Utilization has always been unimpressive at #8, in stark contrast to the Profit margin at #1.

Sales growth saw a slight improvement in the past 12 months, while Margin change has experienced high fluctuations with the most recent ranking at #3.