Niels Jensen’s The End of Indexing: Six structural mega-trends that will threaten passive investment (Harriman House, 2018) is a wonderfully thought-provoking book. It tackles macro issues that threaten not only passive investment but much active investment as well. Whether you agree with Jensen or not, and on most points it is hard not to, he will inspire you to rethink your long-term investing strategy. 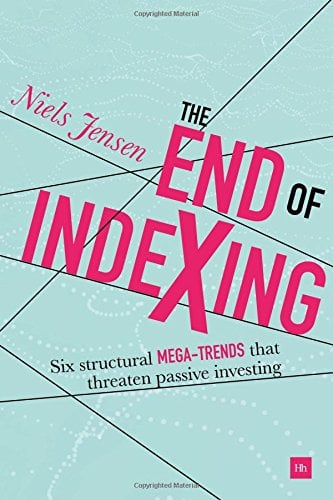 The six mega-trends that Jensen analyzes are: the end of the debt super-cycle, the retirement of the baby boomers, the declining spending of the middle classes, the rise of the East, the death of fossil fuels, and mean reversion of wealth-to-GDP. No, he didn’t ignore automation; he just didn’t want to include it as a mega-trend because he wasn’t sure of its economic ramifications. And so it remains an important thread throughout the book but one with more questions than answers.

Jensen is a Dane based in London, the chief investment officer of Absolute Return Partners, which he founded in 2002. Although many of the charts he uses are based on U.S. data, he draws on trends from across the globe, contending that “all the structural trends in this book are global (or near global) in nature.”

Here I’ll take a quick peek at the last mega-trend, mean reversion of wealth-to-GDP. Jensen’s thesis is that “certain ratios have well established mean values, and the long-term mean value for US household wealth-to-GDP is about 3.8 times. In other words, if wealth-to-GDP is much different (as it is now), it will probably revert to the mean over time.” In recent history, the ratio hit 4.8 in 2000, fell back to 3.6 after the bear market of 2001-02, then went back up to 4.7 before getting decimated during the Great Recession, and as of the end of 2017 reached a whopping 4.9.

The wealth-to-GDP ratio can be understood as a capital-to-output (or capital efficiency) ratio, with wealth as capital and GDP as output. The lower the ratio, the more efficiently a country utilizes the capital at its disposal. So right now the U.S. isn’t using capital efficiently.

How should an investor structure her portfolio if she believes Jensen’s analysis? Jensen is a long-term investor, so he is not prescribing a short-term fix. In fact, he says, “if my recommendations work well in the near term, it will be down to luck more than anything else.” But, after reviewing four types of risk—beta, alpha, credit, and gamma—he is most inclined to focus on gamma risk. Examples of gamma risks are the factors (e.g., volatility, momentum, income, value, and size) in factor-based investing. The gamma risk factor offering the most attractive risk premium at the moment, he believes, is illiquidity risk, such as investing in music royalties.

I’ve barely skimmed the surface of Jensen’s book in this review. It merits reading and re-reading. And trying to take the other side of his arguments.