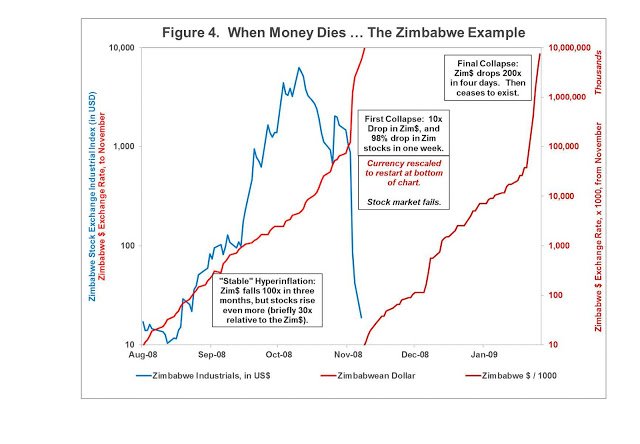 This famous old Wall Street warning is worth bearing in mind as we explore the possibility of bubbles. Because there remains no theory that explains how a bubble starts or when it will end, it is possible to be right in the assessment that current prices are irrationally high due to a bubble and still be wiped out as the bubble inflates further.

That’s when the currency and the stock market stepped up the volatility another order of magnitude.  When the hyperinflation went into overdrive, with purchasing power falling ten-fold in less than a week, the stock market fell 99% (99.9% adjusted for the tumbling currency) in that same week.  The stock market then ceased to exist.

Suppose an investor had the clairvoyance to know that the market was going to tumble 1000-fold (in US dollar terms, after adjusting for the tumbling currency), in the next three months.  And, suppose there was a way to short-sell that market.  This would seem to be a “can’t lose” proposition.  Even with prescience, knowing that the market was going to zero in three months, the investor would have first lost 50 times our money, and quite possibly bankrupted, before being proved correct!

This is one of the most challenging attributes of bubbles.  They are hard to transform into profits, even for investors who correctly discern them, because the late stages can take valuations into the stratosphere.