Spruce Point Capital Management is pleased to announce it has released the contents of a unique research report on Kratos Defense & Security Solutions, Inc. (Nasdsq: KTOS) (“Kratos” or “the Company”).

Spruce Point has conducted a critical forensic and fundamental analysis of the Company. We believe the current management has destroyed tremendous value, while overseeing an enterprise that has repeatedly had run-ins with Federal regulators. Given management’s previous association with Titan Corp, a firm that settled one of the largest Foreign Corrupt Practices Act violations during its time period as a public company, we caution investors to view an investment in Kratos with extreme caution.

Kratos is currently promoting its prowess in Unmanned Systems and robotics technology, an area where it still struggles to turn a profit. Spruce Point has had significant success by identifying problems early at similar companies that promote their drone and robotics ambitions, only to significantly disappoint investors - notably iRobot (IRBT) and AeroVironment (AVAV)

As a result of our investigative analysis, we have issued a "Strong Sell" opinion on Kratos, and a long-term price target of approximately $3.15 to $6.30 per share, or approximately 40% - 70% downside risk.

After a reckless and failed acquisition spree from 2008-2012, Kratos teetered on credit default before divesting a key division to deleverage, and pivoting focus to hype its unmanned systems (aka drones) business. With its share price rising, and a wave of equity offerings, Kratos has made a remarkable come back. However, after a close forensic analysis, we question the legitimacy of Kratos’ success and its ability to hit its aspirational goals of $800m of revenues at 10% EBITDA margins. Given the propensity of Kratos to over- promise and under-deliver, we do not believe it warrants its premium valuation. We see 40%-70% downside risk

Terrible Business Through Multiple Reinventions Now Hyping Drones: Originally a dotcom darling named Wireless Facilities that IPO’ed in 1999 with hopes of being the leading provider of outsourced services for wireless networks, the Company collapsed and later took a large accounting restatement when material weaknesses were revealed. Under new management, a name change to Kratos in 2007, and a divestment of businesses, the Company started focusing its efforts on products and solutions related to Command, Control, Communications, Computing, Combat Systems, Intelligence, Surveillance and Reconnaissance (“C5ISR”). After failing to execute on these opportunities, Kratos is now promoting its billion dollar opportunities in unmanned systems (drones) in the hopes of finally turning the corner to sustain profits and free cash flow, both of which have been forever illusive for shareholders

Significant Value Destruction Through Wasted Mergers and Acquisitions: From 2008–2012, Kratos acquired ten businesses for nearly $1bn. These deals contributed an estimated $801m and $129m of sales and EBITDA (16.1% margin). Yet, recent results suggest $239m and $69m of sales and EBITDA losses, net of divestitures, and margins are a pathetic 7.2%. Kratos looks like an abysmal failure run by management adept at value destruction. Share dilution is +24% p.a. since the current management team took control, while cumulative free cash flow is -$25m. Leverage skyrocketed to >10x EBITDA, forcing it to initiate a strategic review process in 2015, which resulted in the divestment of its Electronics Products Division, allowing it to avert default. Kratos is now selling its Public Safety business at a depressed valuation of 0.5x and 6.5x 2018E sales and EBITDA (despite claiming it will generate free cash flow this year) and impaired more goodwill. Brace for additional disappointment.

Warning About Management History Associated With Past Scandal: Kratos is led by Eric DeMarco (CEO) and Deanna Lund (CFO) since 2003-2004. These executives joined from Titan Corp, where DeMarco was COO and Lund was Titan’s Controller. Titan was a tainted defense contractor that in 2005 paid the largest fine in history (at the time) to settle criminal and civil charges that it violated the Foreign Corrupt Practices Act. Lockheed Martin aborted a takeover of Titan Corp after conducting its due diligence on this matter. According to shareholder lawsuit documents, Titan engaged in a scheme to inflate revenues and book fictitious receivables. Titan used “middlemen” and “private consulting companies” with ties to foreign government officials to secure business. The litigation says confidential witnesses claim DeMarco knew about the corruption and DeMarco was responsible for transferring funds to Benin, the African country involved. DeMarco was also allegedly the source of the “percentage of completion accounting techniques learned from the ‘Andersen school of accounting’ that allowed Titan to either overstate or prematurely state revenues at the company.” We note that Kratos CFO Deanna Lund omits from her current biography that she worked at Arthur Andersen, the defunct auditor that collapsed after the Enron scandal. Management has placed another former financial partner from its Titan Corp days on the Audit Committee as an “independent” member, so we worry that adequate oversight is absent. Management owns virtually no stock and appears more focused on milking its cash compensation by reaping a large % of EBITDA

Kratos Doesn’t Behave Ethically And Has A History of Association With Bad Activities: Engaging middlemen and private consulting companies to gain illicit business appears to be a notable tactic that has followed CEO DeMarco from Titan Corp to Kratos. Coincidence or not? Spruce Point uncovered an undisclosed corruption case late last year of a senior Kratos Director pleading guilty to conspiring with others (including an Army Colonel), and using a shell company OzTEK Research LLC to fraudulent obtain $20m worth of contracts over a decade from the US Army in Georgia. Ethical problems and government sanctions appear more the norm, rather than one-off lapses of judgement at Kratos; we have identified a disturbing pattern of problems associated with Kratos’ businesses over the years which investors need to strongly evaluate

The Bull Case On Kratos’ Drone Business Appears More Promotion Than Reality: With a newly adopted compensation clawback for financial misstatement in place by November 2015, Kratos ramped its promotion of its drone opportunity, while along the way conducting three dilutive equity raises. We believe its drone segment is an amalgamation of two legacy acquired businesses that are subscale and represent a meager 1% of unmanned system market share and DoD government spending. Many of its hyped programs are experimental and high risk in nature, with no guarantee of commercial success, and not currently making money. Kratos has already stopped commenting on certain programs, including Gremlins and UTAP-22. Its most hyped program (LCASD) requires Kratos to front 82% of the capital. Kratos would like investors to believe the deal allows it to protect its IP, but in our view, it shows the Air Force’s desire to push the risk (and cost) to Kratos, while providing it a cheap abandonment option. We estimate Kratos has spent a meager $63m on capex and R&D for its drone ambitions since 2013. The only two pure play drone companies, AeroVironment and Parrot SA, have spent $255m and $365m, respectively, during the same period. Although each company operates in a different market segment for drones, Kratos touts its drones to be “high performance jet aircraft made of special composite materials”; this heightens our concerns that Kratos is materially underspending to become a credible unmanned systems player

Beware History of Failure To Meet Expectations, Cash Flow Struggles More Evident: Bulls are buying into Kratos story that it can reach $800m of revenues (pre PSS divestiture) at 10% EBITDA margin, while generating positive free cash flow. Our analysis of its ability to hit its financial targets (especially free cash flow) suggests investors should brace for disappointment. In addition to recent executive turnover in key positions (chief accountant, drone president, and CIO), Kratos quietly started disclosing a large loss accrual on contracts, rising 500% between 2015 and 2016. Its business mix has deteriorated (declining backlog and highest % of fixed-price, high risk contracts in its history). Its historical backlog definition is very aggressive, so take it with a grain of salt. However, most alarming in Q3’17 Kratos materially increased its cash burn estimate, cut drone capex in Q4’17, has DSOs rising to multi-year highs, and unexpectedly sold its PSS segment at a depressed value to raise cash

Analysts See +29% Upside, A Terrible Risk/Reward Considering We See 40%-70% Downside: Kratos has among the highest valuation in the aerospace and defense sector (20x and 70x 2018E EBITDA and P/E), despite having weak margins, poor management that cannot prevent activities that run afoul of laws, suspect accounting that doesn’t depreciate corporate segment assets, and a history of failure. Its valuation is at a multiyear high, based on the hope that this time is different. Analysts are bullish, and some arbitrarily pencil in a few dollars per share for “future potential drone opportunities.” Many long-term fundamental Kratos holders have ditched the stock, leaving rules-based indices to buy. Valuing Kratos at a discount to peers on EBITDA, free cash flow, and book value we estimate 40%-70% downside ($3.15-$6.30/sh)

Litigation brought against CEO DeMarco while an executive at Titan Corp suggested that confidential witnesses knew he played an active role in fraud and was the source of “the Andersen school of accounting” – a reference to the disgraced auditing firm, Arthur Andersen, where Kratos’ current CFO Lund worked (though she omits it from her biography). The shareholder litigation case was settled for $61.5m and Titan paid $28.5m in FCPA fines. 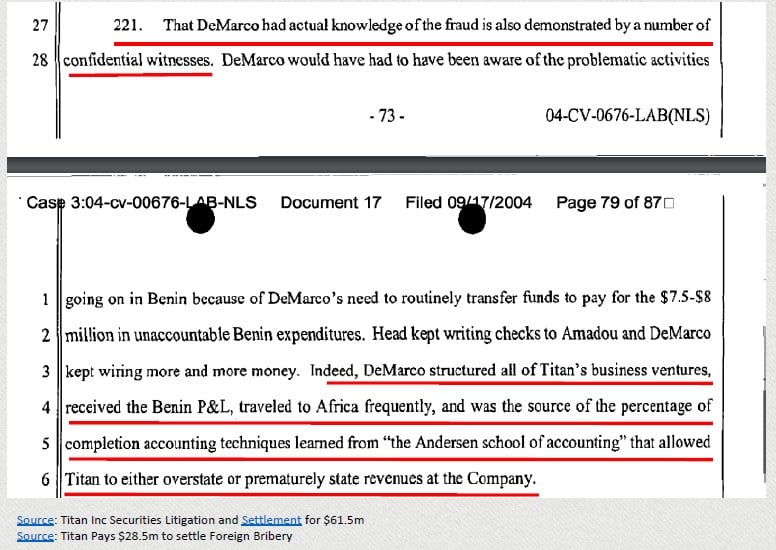 Kratos: A Collection of Tainted Assets 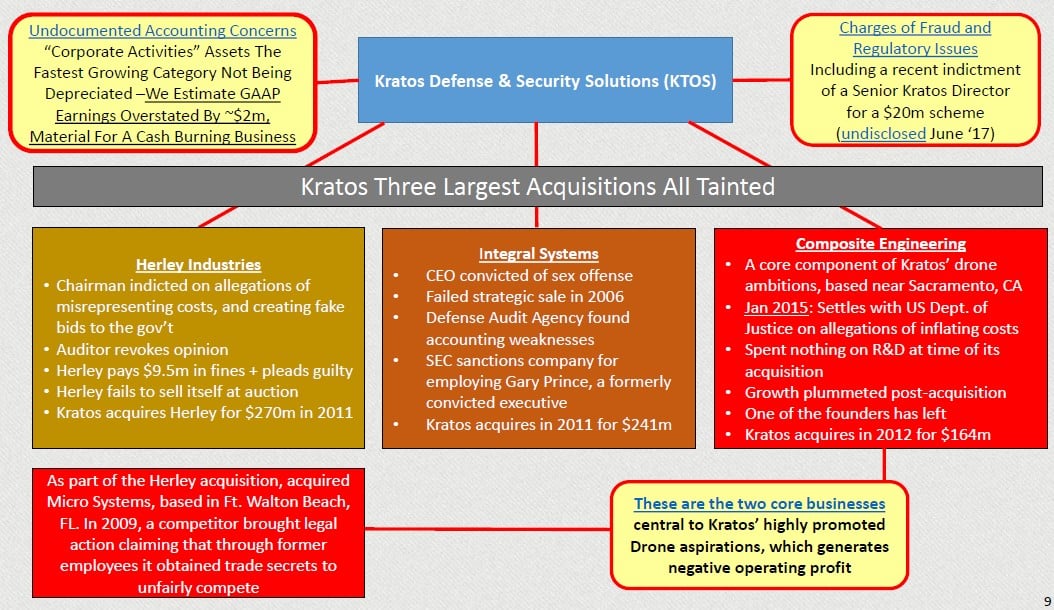 Kratos is trading at peak valuation on the inflated belief that “this time is different” and that its aspirations in the heavily promoted unmanned systems (aka: Drones) will drive nearly $800m of revenues and near record 10% EBITDA margins. (1) We believe investors should brace for disappointment, a cold hard fact of management’s repeated ability to over-promise and under-deliver. 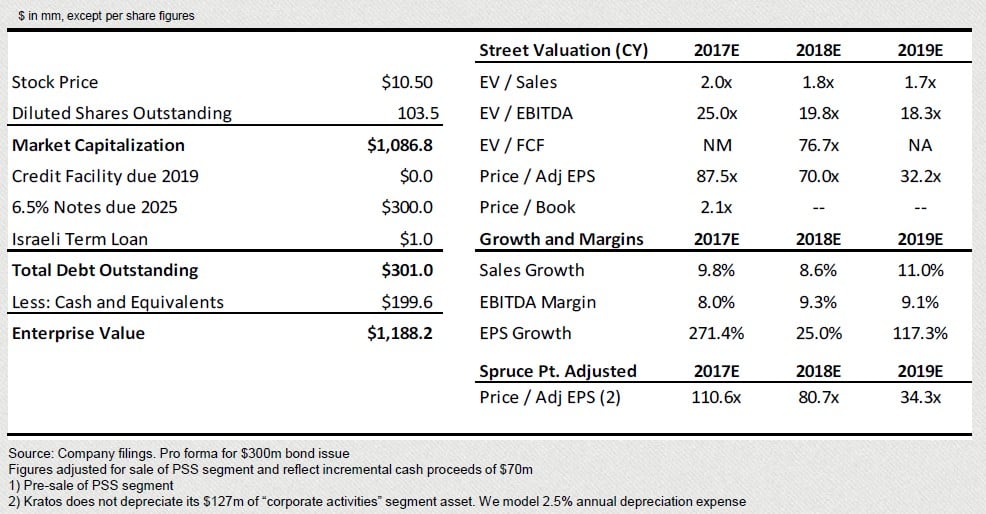