ValueWalk
Home Economics Is The S&P 500 The Best Investment For The Future? 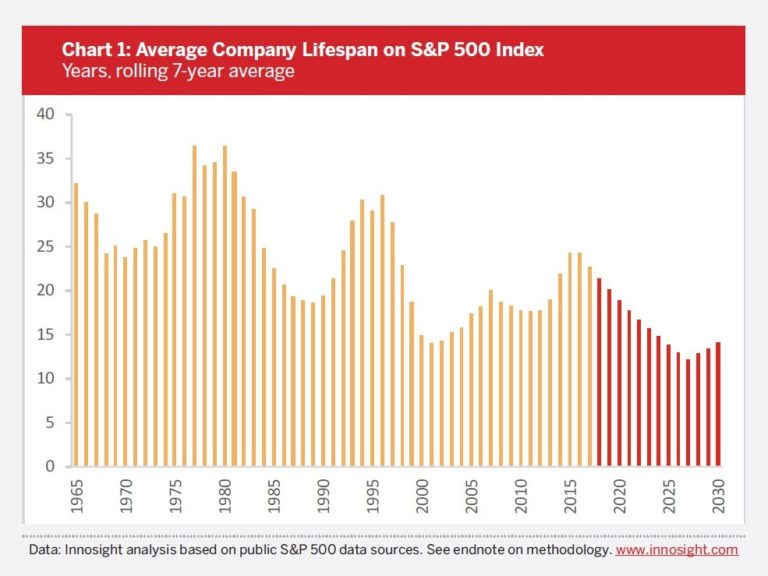 Before this article receives hate comments from both bullish and bearish investors, the purpose of this article is to discuss the average historical and projected lifespan of companies included in the S&P 500 index, as well as discussing whether the S&P 500 should be considered as an active manager going forward, rather than a passive manager. (If you are looking for a valuation based discussion about markets, please scroll to the bottom of the article for a list of articles on the topic.)

The theory of disruption in business is that competition doesn’t only come from businesses who are in the same industry, but can also arise from completely different industries. One example of this is movie streaming disrupting movie renting stores and movie theaters. The reason disruption is so heavily studied and has become a buzzword in investing is that it can come from seemingly nowhere and take market share from established brands. Companies which spent years developing their brands can see their business disappear almost overnight. It’s like a black swan event except with industries not the economy. If you’re an investor, it might not be enough to just look at the competition. You need to look at how technology can destroy a business.

Companies Are Dropping Out Of The S&P 500 Index Quicker

The chart below provides great clarity into the importance of disruption.

The lifespan of companies has been falling for a few decades. There are cyclical changes as more companies fail during recessions and less fail when times are good. However, let’s ignore those small changes and look at how the average company now only stays in the index for about 20 years instead of 30 years. The internet makes disruption easier than ever before because scaling business growth is easier and faster. Companies are gaining billion dollar market caps in less time than ever. For example, a small team consisting of only a few programmers can develop a game for mobile devices which successfully competes with mega corporations’ games which have taken millions of dollars and years to develop. It’s possible that marketing is less impactful than in prior generations because product reviews have become a more meaningful part of any purchase decision. This efficiency makes it more difficult to protect a market share moat. The internet is making competition fiercer, especially in retail.

If the average S&P 500 company follows the projected path, then a company on average will only last about 10 years in the index. This makes it more difficult to invest because cash cow companies won’t be able to milk profits for as long. Either a company innovates or it’s out. It’s important to recognize that just because the S&P 500 index has gone up over time, doesn’t mean stocks individually go up. The index has a huge survivorship bias, meaning it doesn’t include the losing companies. If the S&P 500 stuck with the same 500 companies, it would have terrible performance. The big tech names of today wouldn’t be included if the S&P 500 never added and subtracted names. Looking at what this trend portends, it seems like owning the S&P 500 index fund will be a better strategy in the future. If companies last a shorter time frame, the index fund will have much higher turnover. It will become almost like an active fund. It could end up being a good strategy to own the index since picking stocks will be tougher.

The easiest takeaway from the chart below is that more companies with negative earnings issue IPOs at the top of the business cycle.

Percentage Of IPOs With Negative Earnings Is Very High

Obviously, that’s bad news for the current economy because the highest percentage of money losing IPOs since 2000 occurred in 2017. We’re not arguing that 2017 isn’t near the end of the business cycle. It probably is within a couple years of the next recession. However, another point worth noting is that companies which promise to disrupt businesses could be worth a lot of money even before they are profitable.

The ability to scale quickly makes money losing companies more valuable, especially when credit is cheap. This is another example of investing becoming tougher because when you invest in these firms, you need to project which business will turn an idea into real profits. Investing in an IPO with negative earnings makes you into a venture capitalist, which is a far riskier form of investment in unproven companies rather than buying an established profitable business. Even if established firms are dropping out of the S&P 500 index quicker, it’s still challenging to determine which firms will replace them. Buying an IPO with negative earnings could be considered a worse deal than venture investing because when you buy a company after its IPO, the valuation is already extremely high, usually sufficient for some of founders and early stage investors to cash out a portion of their equity.

Therefore, it’s possible that both secular and cyclical trends are causing more money losing firms to go public. On a side note, with startups raising money in the private markets, it appears the public markets and private markets are becoming more similar. The money losing IPO trend is different from the average lifespan chart because the secular trend is pushing the lifespan lower, while the cyclical trend is pushing it higher. Small firms are getting large faster than ever, but big firms with powerful brands are falling apart quicker than before. It’s important to avoid names which are living off past innovation because their entire business might be lost.

Since investing in individual companies might become tougher because it’s difficult to see which firm will do the disrupting and which firm will be disrupted, investing based on long term themes could be a good idea. The chart below provides an interesting list of mega-themes which are going to change the way firms do business.

Following Megatrends Could Be An Alternative To Stock Picking

If you are interested in reading about market valuations, which this article does not discuss, here are some recent articles we have written on the subject: