ValueWalk
Home Value Investing Greenwood Investors: When Breaking Up Is Easy To Do 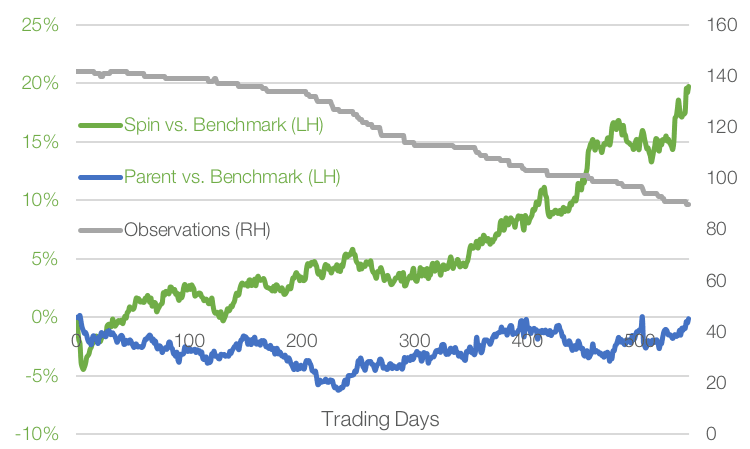 We get by with a little help from our friends. The back-testing for this article was done by our dear friend, Ehren Stanhope who writes a great blog, factorinvestor.com. This is the first of what we hope will be many collaborations with Ehren, and we thank him for his generous data-crunching on our behalf. I encourage all to sign up for his blog posts here.

Your author grew up in a traditional catholic household, in which the Italian-born mother was more comfortable with the F-word than she was with the D-word. The word which must not be named was “divorce,” and our mouths were washed out with soap if we let it slip out.

Yet at the same time, quite paradoxically, numerous relatives showed that separations not only can sometimes make both sides happier but also healthier people. This was the first, of many, paradoxes noticed within Catholic dogma.

In a very similar vein, investors who push for corporate separations are often relegated to the “short-term profit maximizing,” bucket which we so staunchly despise. The evidence supporting long-term thinking and decision-making is large, growing, and nearly irrefutable. We disagree with many activists which call for company separations merely to take a quick buck and move on.

We disagreed with Jana’s insistence that Whole Foods sell itself, though once Amazon decided to enter the physical grocery space, we did eventually prefer to not compete against that combination and were happy to sell our shares to Amazon.

Despite the bad name given to “break it up,” activists, there are in fact many businesses which make sense to stand apart from each other. Of course, the pioneer researcher of spin-offs is Joel Greenblatt, who wrote the tome on the subject You Can Be A Stock Market Genius.

Your author read it in 2004, nearly identically matching the peak interest in the book and special situations in general. In perhaps my first contra-indicator move, I took the bait and joined a Special Situations fund straight out of Tulane. That school was also where I first met Ehren, who generously crunched the data contained in this analysis. I hadn’t even seen the performance of the fund, I simply knew the type of investing made sense and spoke to me.

Apparently, it did for everyone else too.

From Conglomerates to Splits

In January of 1997, Joel Greenblatt published Stock Market Genius. Not coincidentally, it followed less than 18 months after ITT, one of the largest and most famous conglomerates announced it would split itself into three units. The ITT breakup was the tombstone that capped the terrible reputation that conglomerates came to have. Just a few months after Stock Market Genius debuted, ITT announced another 3-way split and the era of conglomerate had officially given way to the era of the spinoff.

Greenblatt cited third party research which claimed that spinoffs outperformed the market by 10% per year and then offered some case studies on what particularly worked well. Studies that have been published since the publishing of the book have confirmed 10-20% outperformance of the spun companies. Indeed, Stanhope’s data suggests this “rule of thumb,” still holds.

Kellogg Capital Group’s Special Situation Group, the family office your author joined out of university, generated outstanding returns following similar strategies, compounding at 41.8% per year. When you generate performance like that, you create friends for life. While one PM wished to remain anonymous, I’d like to publicly thank Co-PM Jeff Anderson and his partner for giving this naive fool an early education. Yet, as the contra-indicator comment suggested, the “discounts” on these event-driven situations had completely collapsed and by the time I joined the fund, there were very few new ideas to look at. I added zero value.

Greenblatt’s own hedge fund at the time had compounded returns above 50%, outstanding performance that invited herds of investors to join the cult. Even had he not written the book, we suspect these returns would have been diminished as word spread of the performance and the strategy, but the book officially killed the category.

But it took a while. While we only have Google trends data going back to 2014, it was right around 2014 or 2015 that the steady stream of ideas had completely dried up. Sure, there were still spin-offs, but they would no longer sell-off. The valuations of such securities were driven to abnormally high levels, as the herd of investors chasing >50% returns crowded out the value guys. 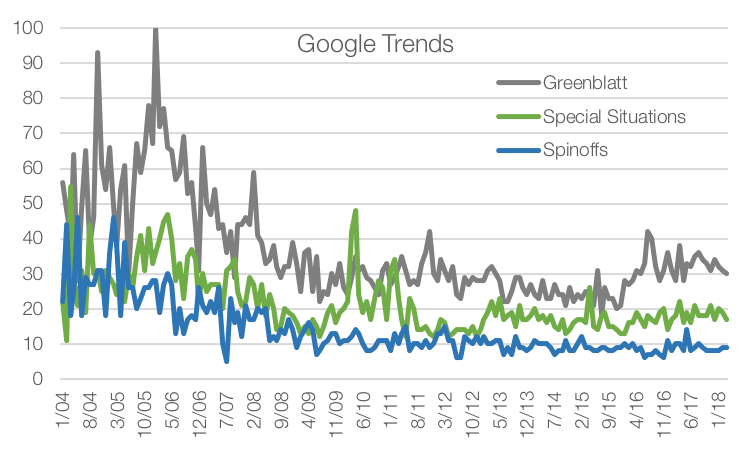 Opportunities dried up, and we had a much harder time finding attractive special situations candidates. We had to look for similar types of opportunities, but ones that hadn’t formally announced a spin or split. Yet all the “confirmatory” studies on whether or not spinoffs still generated excess returns suggested the category was still attractive and still outperformed the index. That ran counter to our experience.

Curious to know if our personal experience was backed by empirical data, we spliced the same data above by a pre-craze and post-craze time period. We identify 2004 as the year of “peak,” interest in Greenblatt, Special Situations and Spinoffs as measured by Google Trends. While Greenblatt’s early 2006 interest eclipsed the mid 2004 experience, it was in conjunction with the launch of his second book, The Little Book That Beats the Market, where he didn’t refer to special situations strategies. Thus, we isolated 2004 as the point of maximum interest in these strategies to see how spin-offs before and after such a period performed.

The empirical data confirmed our suspicions, by a long shot. 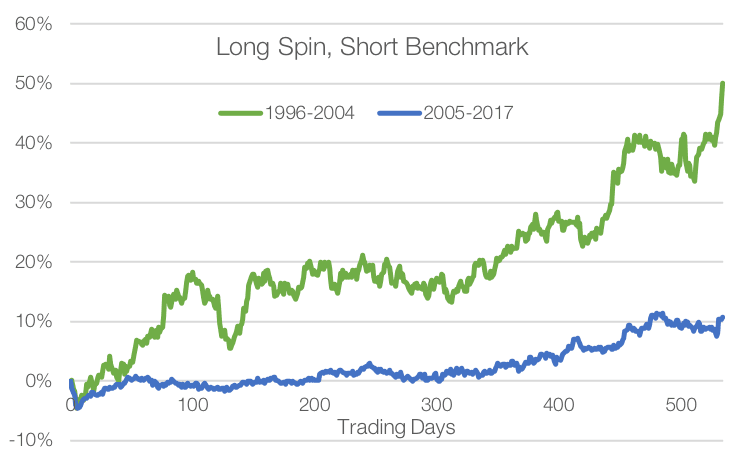 Splicing the exact same data as shown in exhibit 1 shows a completely different experience. The retrospective studies all included the best years in the sample. This hid the more lackluster performance that was being experienced by the same exact strategy in subsequent years. This empirical data is why we constantly catch ourselves rolling our eyes at “backtested,” strategies as if they were predictive of future returns.

This data also matches the experience of the Guggenheim ETF (CSD) that was created to buy spinoffs a couple years after the climax. Returns have been fairly languid relative to the overall index. 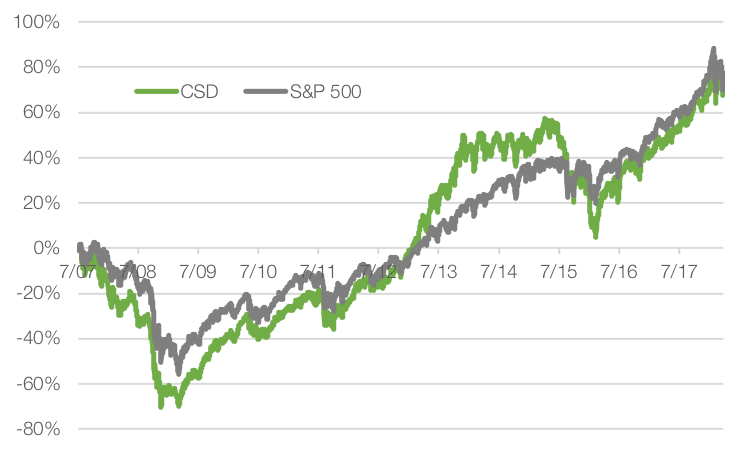 The data analyzing the performance of the parent is similar, the strategy performed slightly better before the Special Situations craze had climaxed, yet still remained a fairly lackluster way to generate alpha. 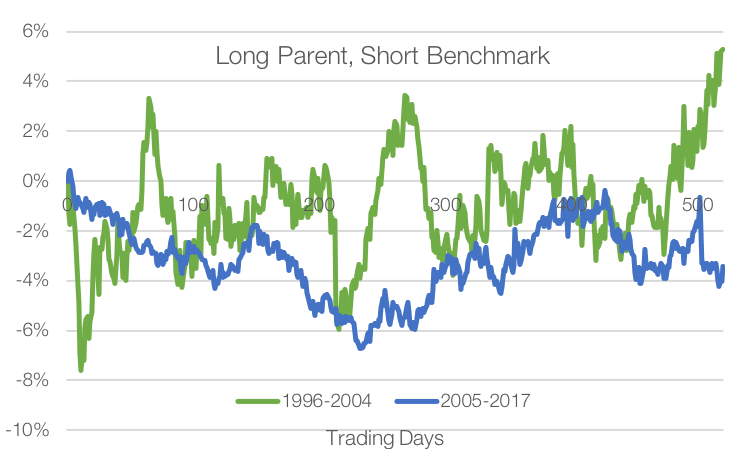 When everyone is crowding into the clown car, it’s time to pump the brakes. Being contrarian, even against the “contrarians,” is of the utmost importance.

However, we’re not saying one needs to give up on the category. In fact, of the 2005-2017 cohort of spinoffs, 48% outperformed the market two years after the spin. But it is no longer a “set it and forget it,” strategy, and each opportunity requires serious scrutiny.

When the Clown Car Goes Left, We Go Right

Our experience with splits has been very positive and quite a bit different that that of the overall spinoff sample size. Yet, we’ve been keen to look for hidden assets within companies rather than wait for the actual announcement of a split to come. Of course, this means that we’re taking transaction “risk,” in the event a split isn’t announced. And that’s ok for us, we’re not often investing based on a catalyst (we are post-catalyst investors). Rather, if there are assets within a company that the market is choosing to ignore, that is not only our opportunity, but if we back good managers, they will tend to create value from these assets over time.

Often times, however, the easiest way to build value is to actually split. There are innumerable reasons why a split may be better for each individual situation. Often times it’s allowing a unit to access a cheaper cost of capital, other times it’s in order to hire an independent management team that myopically focuses on value creation of the individual unit.

Isn’t it interesting that in preparation for the spin-off of Ferrari, FCA had to fire its complacent manager and install Sergio  Marchionne as head of the unit? The company could have easily lifted deliveries sooner, given the waiting lists had dragged past two years for its performance models, but it took a public debut for the company to step on the gas. Ferrari currently trades for 3x the market capitalization of FCA when we bought it, not to mention the positive performance FCA has since posted. 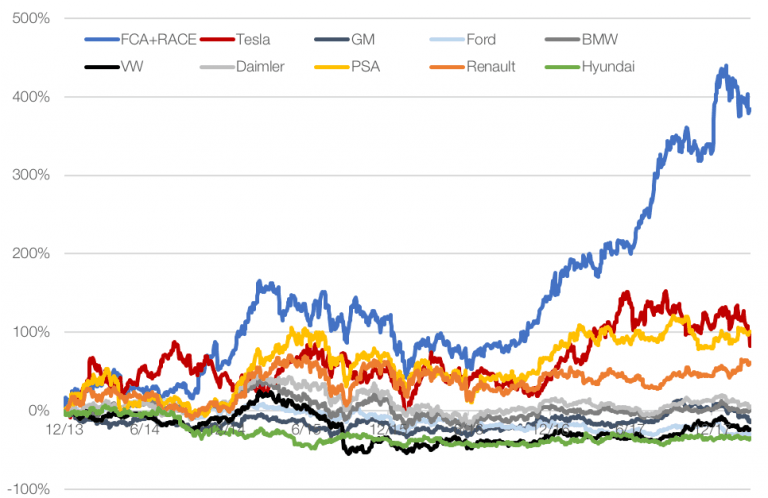 Yet, quite opposite from most special situations in the US pursuing “strategic alternatives,” when we purchased our stake in 2011 and 2012, FCA was in an “untouchable” area given it was a leveraged auto company in Italy. Three strikes, and it was out for nearly all global investors. In fact, it was a favorite short among London hedge funds. If we remember correctly, the short pitch at Ira Sohn London was that, “it’s just shitty.”

Sometimes, though not often, it pays to be a contrarian against contrarians.

Now that most roll ups have completely blown up (we think Kraft-Heinz is next), the last few decades of GE have completely unwound, and the historical performance of spin-offs has deteriorated so thoroughly, we think breakups are about to stage a comeback.

We still think all of the useful lessons learned from the last decade of lackluster category returns apply. Given the competition for catalysts, we need to invest before any split has been announced or is apparent. Furthermore, starting valuations need to be constructive and we need to stay contrarian.

Each of our top five holdings (~55% of our portfolio excluding the coinvestment, ~75% including the coinvestment as our largest position) has quite mistakenly ended up in splitsville. EXOR’s FCA is about to spinoff its parts division, and its CNH unit is preparing to fix its Iveco truck unit to spin it out. TripAdvisor has had approaches for multiple units within its business, though here we agree with Aristotle, and think the sum of the parts is greater than the whole.

“The whole is greater than the sum of its parts.” – Aristotle

Telecom Italia is preparing the separation of its network infrastructure from the retail arm, and despite an activist fund coming in and “demanding” that TI split itself, had it actually met with the chairman, it would have known this was already in motion. Investors can see our notes from our meeting with the chairman last week here. We believe the group is headed for a New-Zealand style breakup, a divorce that ended quite well for investors.

Vivendi has been a Special Situations machine since our Bolloré holding took control. The group is preparing to carve out a portion of Universal Music Group (see our notes from our meeting with the CEO last week) and is backing the TI split. We would be surprised if one day, Bolloré doesn’t eventually split itself in two.

Lastly, and quite surprisingly to the market, Rolls-Royce announced it was pursuing a sale or split of its marine division a couple months ago. While there are zero synergies between aerospace and marine engines, we are surprised by this timing. We would prefer the group to follow FCA’s lead and only split the division when results are accelerating.

Certainly not to come last, we are working with our largest position, which remains confidential, to accelerate the build out of its key growth business. Not only will be backstopping a public offering of its capital-intensive growth business, so that it can access cheaper capital, but we are encouraging the company to ignore short-term margin expansion and reinvest profits back into longer-term growth.

By doing so, we hope and trust, we will fall on the right side of the history of splits.