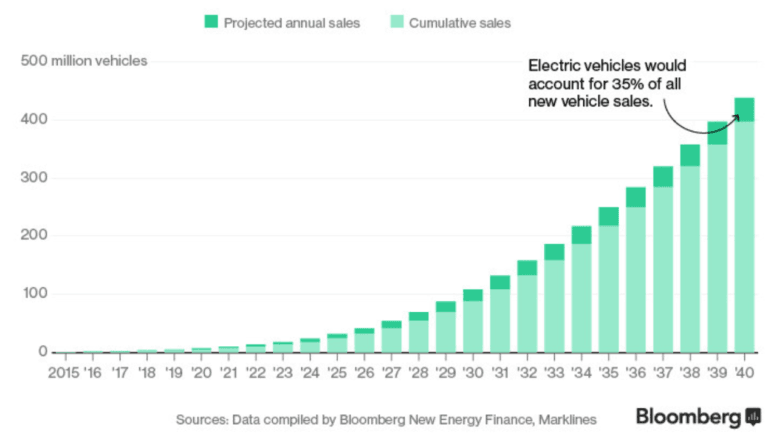 Like many other industries, technology is transforming the auto industry at an incredible pace. With the heavy focus on environmental issues, traditional vehicles are being transformed to electrical motors due to their impact on the environment. The vehicle industry is also integrating tech-connected features, which make vehicles more than just a means to get from point A to point B.

General Motors (NYSE: GM) is one of the early adopters and a leading company in this transformation process in the auto-industry. Its solid experience in the auto industry combined with its ability to access necessary resources, such as capital, places GM in a favorable market position during this innovating process.

GM offers its vehicles directly to consumers as well as through dealers. There are over 19,000 dealers selling GM vehicles in 125 countries around the globe. GM has assembly, manufacturing, distribution, office, or warehousing operations in more than 60 other countries besides North America.

In the Automotive industry, GM in North American develops and manufactures vehicles under Buick, Cadillac, Chevrolet, and GMC brands. Outside North America, GM also provides the Holden brand in addition to the other brands.

The automotive industry is becoming disrupted by on-demand mobility services, such as data connectivity services and shared mobility. These forms of connectivity will allow drivers to use their idle time and consume different forms of media and services. McKensy & Company claims that this innovative element will create an additional 30% growth in potential revenues for auto industry. GM has already started integrating such services in their vehicles and it is leading the US market with more than 3 million Wi-Fi enabled vehicles.

Considering the tough discussions about environmental protection policies, electric vehicles are becoming viable and competitive. Factors such as harsher regulations on gas emission, lower battery costs, and increasing consumer preference will create potentially a new momentum for penetration of electric vehicles in the upcoming years. GM has a vision for strongly establishing itself in the segment of electric cars. GM’s Executive Vice President of Product Development stated that “General Motors believes in an all-electric future”

Fourth quarter produced a decline in net revenue of $2.2 Billion or 5.6% decrease from the same period of previous year. The decline is attributed mainly to the decrease in wholesales in North America. Besides the decline in revenue, the operating income margin and the adjusted EBIT margin improved substantially to 6.8% and 8.2%, respectively. The improvements were primarily caused by favorable changes in price and cost performance, which offset the decline in wholesale. 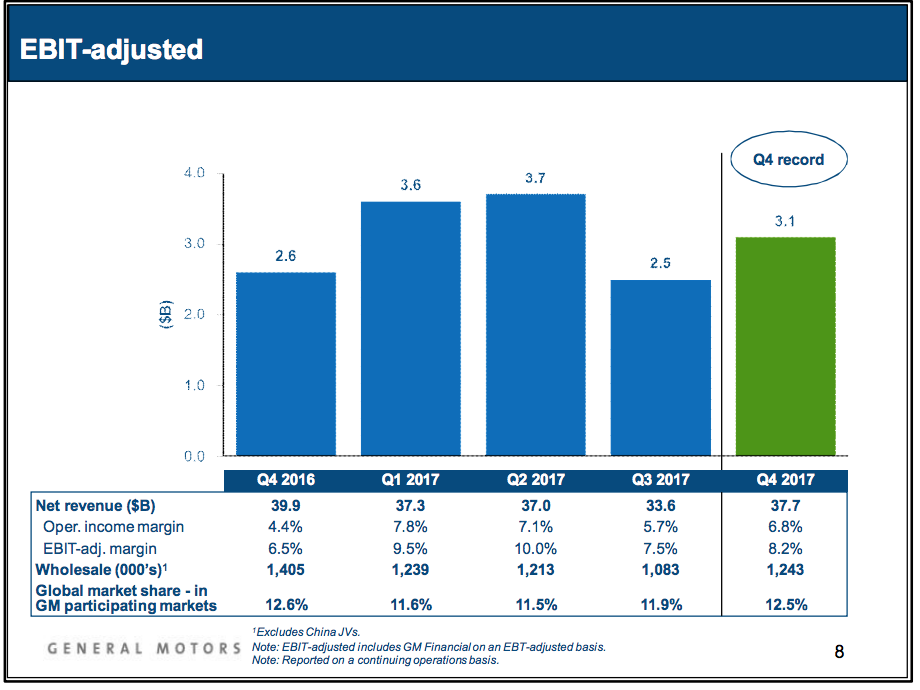 The most successful product under GM is the Chevrolet brand that comprises more than 43% of the total number of vehicles delivered in 2017.

General Motors has maintained a solid financial position in regards to liquidity. Throughout their operations in the last 5 years, GM managed to keep a balance of cash & short-term investments of more than $20 billion. 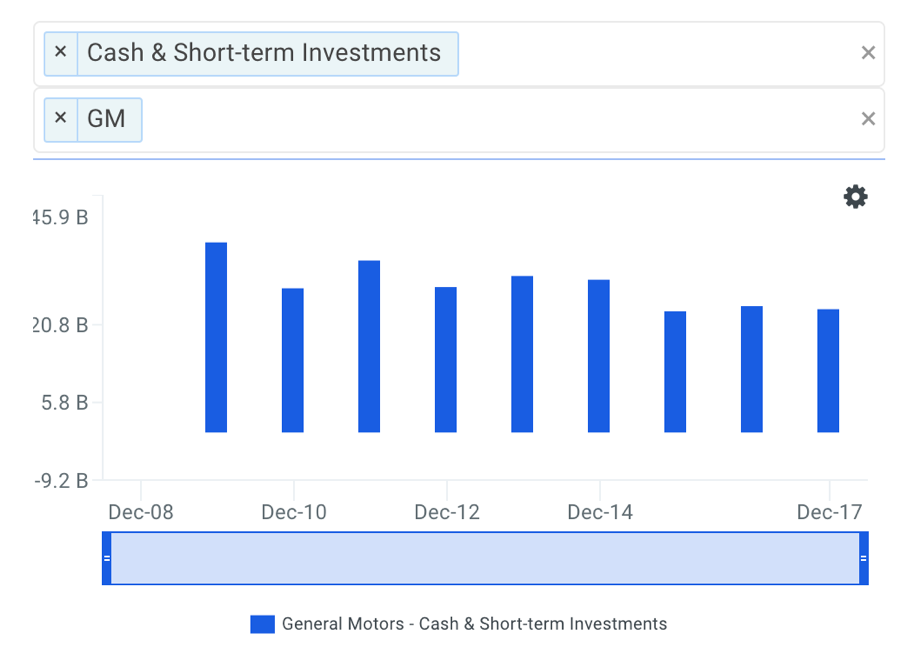 According to the analyst’s forecasts, GM is expected to have a substantial improvement in the performance for the next five years. The estimated EBITDA is over $20 Billion for each year and NOPAT is forecasted to reach $10 billion. In addition, GM is expected to maintain their strong liquidity level by generating free cash flow of around $11 Billion in each of the next 5 years giving them the competitive advantage in developing new products, especially the advancement of electrical vehicles. 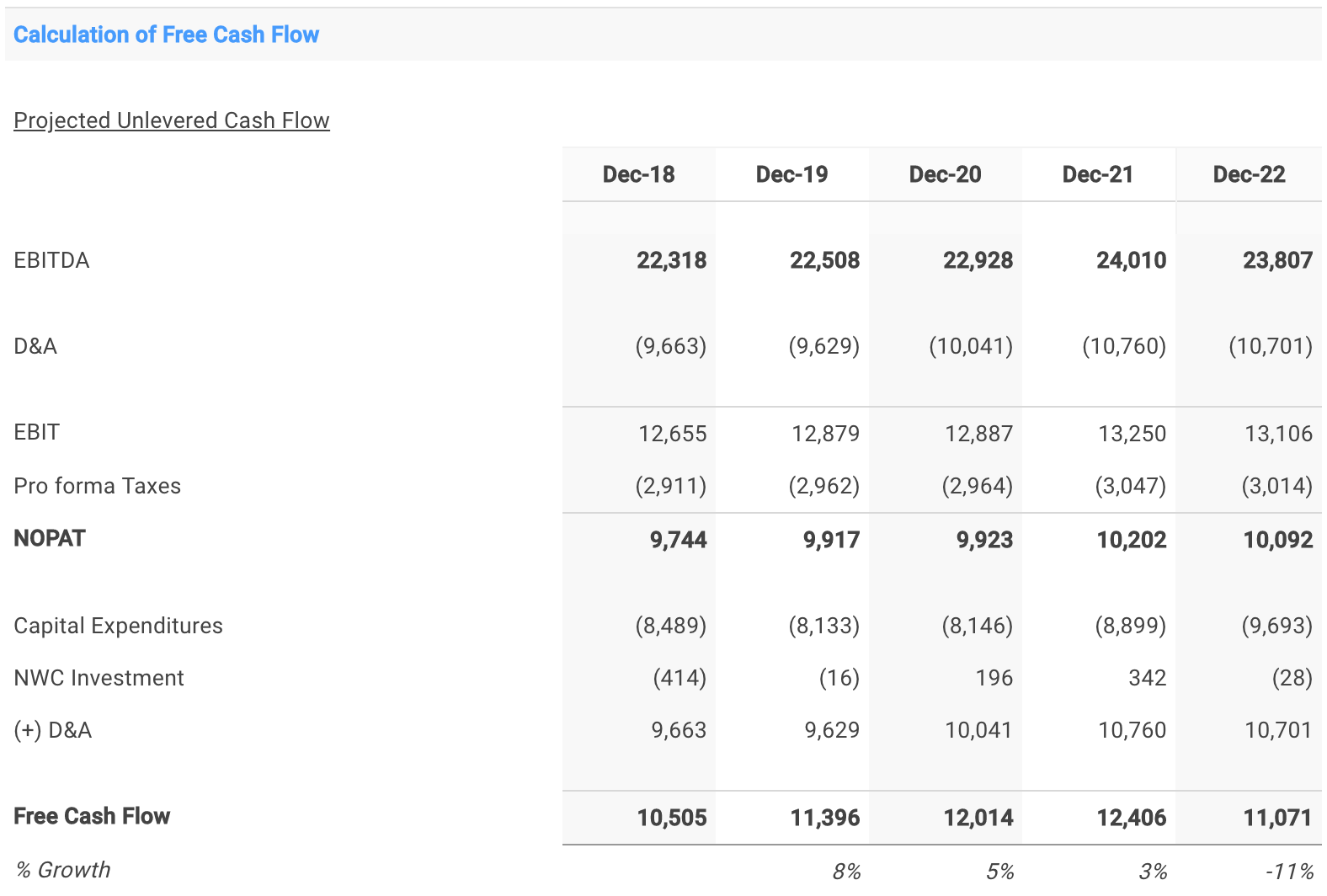 GM operates in a highly competitive industry alongside peers like Ford (NYSE: F) and Tesla (Nasdaq: TSLA). With the rapid pace of technological and innovative improvements in the auto industry, companies are required to invest heavily in their research and developments in order to stay up-to-date on innovations in the industry. This adoption in the ever-changing sector can potentially consume a substantial amount of assets.

Analysts forecast that revenues will decline for 2018 but GM is expected to generate solid revenues the following 4 years. Besides heavy investing in developing new technologies for its vehicles, General Motors is expected to improve its EBITDA margin to the range of 16-17% of revenues in each of the next five years.

In addition, finbox.io’s three separate valuation models generates an average fair value estimate of $41.65 per share, which represents an upside of 17% over the current trading price of $35.59.

Conclusion: Well-positioned and Primed for Returns

With the substantial focus on technological improvements and innovation for its vehicles, GM is positioned in a favorable situation compared to its most direct competitors. The inclusion of technological features in its vehicles as well as the launch of electrified vehicles enables the company to be part of a promising business environment. Furthermore, the favorable financial elements mentioned above imply nearly 20% upside potential.