As the title suggests, a familiar if ominous sign has emerged in the US IPO market.  As I’ve previously written on a number of times, studying trends and statistics in IPO statistics (initial public offering) can yield key insights on the state of the equity market as a whole and the resultant risk vs opportunity outlook.

The chart in today's blog comes from a discussion on the trends in the US IPO market from the Weekly Macro Themes report. That discussion aside from the negative earnings aspect, also looked at median age of IPO, proportion of foreign IPOs, and the pace of withdrawals and filings.

As alluded to, the chart shows the proportion of US IPOs with negative earnings. 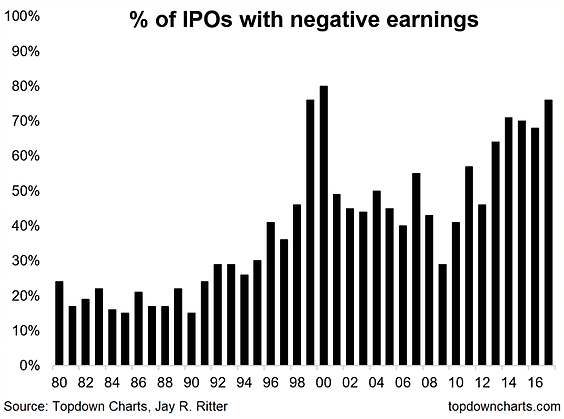 At 76% the proportion of US IPOs with "earnings less than 0"... i.e. loss making companies, was the highest level since 1999 (second equal to the absolute highest in the year 2000). It's an intriguing statistic and one that instantly evokes parallels to the dot com mania.  Certainly, this is the sort of thing you typically see toward the end of a market cycle.

Diving into the detail - note the data is from the fine work conducted by Jay R Ritter of the University of Florida - the top culprit was Biotech companies, with 97% of biotech IPOs in the loss making camp.  Second place, no prizes for guessing, was Technology companies at 83%.  But interestingly enough that left 'all other companies' at 57% - which is actually a record high.

So it adds to a number of signs that we are "late cycle", whether it's the business cycle or the market cycle. But then again, late-cycle does not necessarily mean end-of-cycle, and as the year 2000 showed us so dramatically, these things can overshoot.  I would not say a speculative overshoot is my base case, but from a risk management standpoint (thinking about both sides of the coin), it's not something you rule out, particularly when you see animal spirits truly getting to work.

This article originally appeared as a submission at See It Market