It’s all about Energy Retun On Energy Invested (EROEI)

Dr. Charles Hall may not be a name you instantly recognize, but it should be. 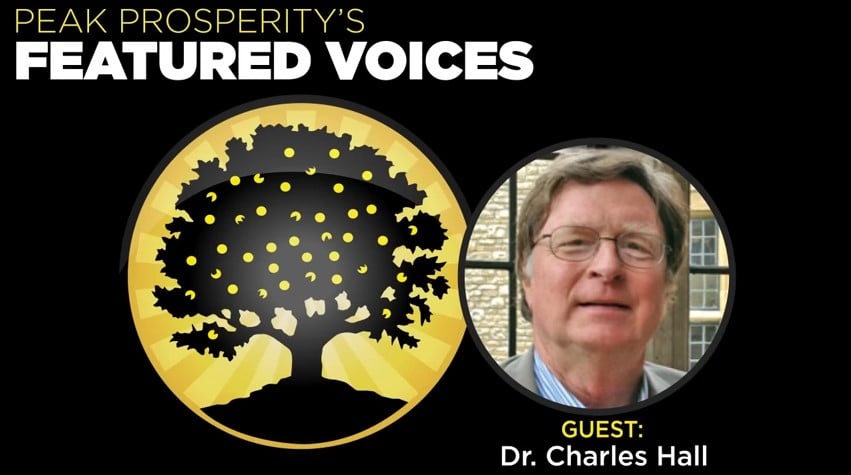 Now a Professor Emeritus of the College of Environmental Science and Forestry, Dr. Hall is a rigorous researcher of energy, oil, biophysical economics -- and was a critical early pioneer in developing the key resource metric of Energy Returned On Energy Invested (EROEI).

These energy investment ideas are everywhere in nature.

Certainly business people know about investments, but you've got to realize that anytime that you're investing, you investing not only money, you're investing energy. And, in fact, we consider money to be a lien on energy, a promissory note on energy.

So, if, for example, you buy in New York City a bagel for $1, that bagel cannot possibly get there without the use of a considerable amount of energy. And that energy is, for example, energy used in Louisiana to take natural gas and turn it into nitrogen fertilizer. And then it's put in a barge and barged up  the Mississippi River to Nebraska. And then a tractor spreads in on a field. And then it plows up the field and plants wheat seeds. And then later comes along and tills the soil and maybe takes care of the weeds or whatever and certainly harvests it. And then more energy is used to take the harvested wheat and grind it up and turn it into flour. And then they put it in a sack and put it on a railroad train and ship it to New York City. And there somebody boils a pot of water to cook the bagel. Oh, and they use electricity to mix the batter. And then you have a bagel.

That would not have taken place without the use of energy at every step.

After a life's career of looking at the world through the lens of EROEI, Hall is very concerned that, as a global society, we are hurtling towards an energy crisis that will forcefully (and likely painfully) downshift our standard of living within the lifetime of the current generation. And yet, our current economic models remain blind to the possibility of resource limits -- so we are highly likely to be caught completely unprepared by this approaching crisis:

Economics is practiced in the United States as a social science. When I first looked into economics I was astonished that it's not consistent with the law of conservation of energy nor the second law of thermodynamics nor the laws of conservation of mass. All of those things do not enter into the basic economic models. In fact, the basic economic models, as far as I'm concerned, just make no sense if you have a background in the natural sciences(...)

I think that we're likely be really blindsided by the decline of oil and gas in near future. The people who have examined the long-term future of fossil fuel availability predict this well within a generation. We're probably going to be faced by severe restrictions in all of our fossil fuels – in oil, in gas, and even coal. We may live in interesting energy times(..)

It's just astonishing what I read in newspapers about people who don’t understand the importance of resources and the physical world in everything we do. Now, it is true, there has been a pretty health dose of examining climate and its relation to economics, and I think that's good. But
I think that's, at most, half the story because I think resource limitations are likely to be at least as important as climate change going into the future, and then we have to think about them at least as much as we have been doing with climate. We have to think about the resource issues much better than we have.

Somehow people think the resource issues have been resolved by the market, but that's not true at all, although, you know, I guess as long as the price of gasoline is fairly cheap, people don’t worry. They think the issue's been resolved. The issue has not been resolved at all. The Limits To Growth and everything associated with that – they're not been proven wrong. One might argue that their timing was not on the money, that things that are taking a little bit longer than was anticipated, but that doesn't mean that the chickens aren't coming home to roost. And I see them coming home rapidly and especially in the poorer countries of the world – they're just getting creamed by the interaction of population growth and resource limitations. And depletion of oil wells and depletion of soils and on and on and on. It's just a terrible situation for many countries.

Those interested in learning more about Dr. Hall's work after listening to this podcast should consider purchasing his new book Energy and the Wealth of Nations; An Introduction to Biophysical Economics

Click the play button below to listen to Chris' interview with Dr. Charles Hall (61m:23s).