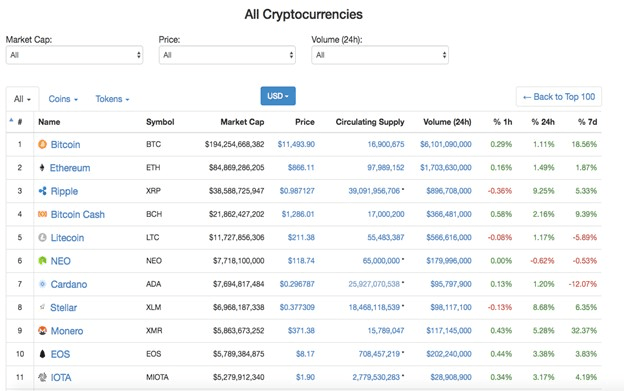 Article by David Drake, full bio at the bottom

Four days ago, the U.S. Securities and Exchange Commission subpoenaed many ICO companies. The summons, originating from SEC’S Boston, New York, and San Francisco offices, were sent to 80 ICO companies.

This action came after SEC’s stern warning to investors on possible fraudulent Initial Coin Offerings (ICOs) in August 2017. Moreover, a number of suspensions were ordered by SEC on companies suspected of unlawful trading of tokens and coins since last year.

In December 2017, SEC also froze the assets of an ICO company that scammed $15 million from investors, promising a 13x profit in less than a month. News abound on fraudulent ICOs so it is vital for investors, especially the newbies, to learn the truth about cryptocurrencies.

Coinmarketcap.com lists 1536 cryptocurrencies available on the market, complete with market cap, price, volume, and performance. Figure 1 shows the first 6 cryptos on the list, with the top 3 being Bitcoin, Ethereum and Ripple.

The list contains all cryptocurrencies – coins and tokens. But what are they really? When did the cryptocurrency phenomenon start and why is it quickly going mainstream? In this article, we will attempt to discuss these questions in full detail.

What is a Cryptocurrency?

We use currencies in our everyday transactions within and outside our own countries. We spend dollars in the US, Australia, New Zealand; yen in Japan; franc in Switzerland; pound Sterling in the UK; euros in Europe; yuan renminbi in China and other currencies in different countries. Technically, we call all these money. And we can exchange our dollars for yen if we have to travel to Japan, or to other currencies if need be.

Cryptocurrency, on the other hand, is a virtual or digital currency. We cannot hold onto it physically like we hold our dollars and coins. Cryptocurrency is a virtual medium of exchange, created using encryption technique and recorded in a blockchain making it impossible to counterfeit. Being organic, it is not issued via any central authority like a government’s central bank. Cryptocurrency has its own ecosystem. To trade one for another (bitcoin to ripple), you have to go to a cryptocurrency exchange like Coinbase and BitFinex.

Cryptocurrencies have no intrinsic value, hence cannot be exchanged for commodities like gold. However, you can exchange them for fiat money using different modalities. Their supply is not determined by a central bank and are available in completely decentralized networks.

As of March 5 of this year, Coinmarketcap had 1536 cryptocurrencies (coins and tokens) with a total market cap of $468,645,198,846. All these cryptocurrencies would not have been created without the discovery of Bitcoin in late 2008 by Satoshi Nakamoto. According to reports, he has mined 1 million bitcoins and stored them across many wallets.

Alternative Cryptocurrency Coins or Altcoins or just ‘Coins’. These are coin alternative to Bitcoin. Most of them are variants (forks) of Bitcoin, founded on Bitcoin’s original open-sourced protocol. Amendments are made to Bitcoin code to come up with a new coin with different features. Examples of alternative coins that are variants of Bitcoin include Namecoin, Peercoin, Litecoin, Dogecoin and Auroracoin.

Coins can also be created using their own blockchain and protocol. These include Ripple, Ethereum, Ripple, Nxt, Omni, Counterparty and Waves. Each altcoin has its own independent blockchain.

Tokens. A token refers to a unit of value created by a private entity for various applications. The tokens are backed by Ethereum’s blockchain protocol. The tokens can be used by the owners within the specified ecosystem.

Tokens can be used to transfer money in seconds at reduced fees around the globe. For example, Ripple’s token, XRP is being tested by Western Union and MoneyGram for application in money transfer services.

Tokens are usually distributed to the public via an Initial Coin Offering (ICO), to crowdfund for a project. WePower, a blockchain-based green energy trading platform, issue tradable energy tokens for energy producers to raise capital. About $40 million worth of WPR tokens were raised in its ICO that ended February 2nd this year.

How Cryptocurrencies Came to Be

Cryptocoins sourced by mining. There are coins that came into the industry through mining. These include bitcoins, ethereum, bitcoin cash, ripple and more. Mined coins have a ceiling which means a finite number of coins is available for mining. If you are interested in cryptocoin mining, there are several beginner guides on how to go about it. Lifewire offers one guide and itsBlockchain has guides for mining Bitcoins, Ethereum, Litecoin, Dash and Monero.

Other coins are currently under development. If you click on one of the cryptos on the list at Coinmarketcap, you can see whether a coin is mineable or not.

The blockchain technology was created by Satoshi Nakamoto when he discovered Bitcoin in late 2008. Blockchain consists of computing “nodes” that resides in a network of computers which communicate with each other directly, not passing in a central server, making it a decentralized system.

When someone requests for a cryptocurrency, record, contract or other information (a transaction), this goes to the nodes (that checks the accuracy of the transaction). Once validated, it is merged with other transactions to form an original block, and attached to the existing blockchain in the same ecosystem. These blocks are written in a public ledger that is immediately distributed to all the nodes making the blocks permanent and unalterable. Every time a request is made, it goes through the same process ending with new block added to the blockchain in the same ecosystem.

A blockchain is not controlled by any single entity and does not have any single point of failure; it is transparent and decentralized. Once a transaction is recorded on the blockchain’s distributed ledger, it cannot be altered.

William Mougayar, founder and producer at Token Summit and author of the book The Business Blockchain, explained blockchain technology using a Google docs or Google sheet analogy. Many individuals can work on a google docs at the same, or enter data on a Google sheet simultaneously. Every change done on it is recorded and cannot be erased. This is also true with blockchain technology.

According to latest data from Coindesk (as of Feb. 19), $8.74 billion have been raised by firms in ICOs. According to coinandcrypto.com, early investors would have netted as high as 50,000% ROI on their ICO investment. Mangrove Capital Partners analyzed 232 ICOs and concluded that a person who invested blindly in every ICO (to include a large number of failed ICOs) would have gotten a 13.2x ROI.

One primary question that comes to mind for a newbie in the cryptocurrency landscape is how to choose a cryptocurrency to invest in amid an array of more than 1500 cryptocurrencies on the market. Figure 2 shows the tail end of the Coinmarket data that was shown early on in this article. 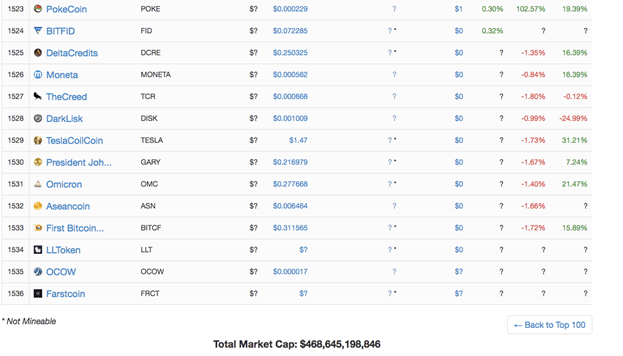 You can see that the total market cap of all cryptocurrencies is more than $458 billion. When looking for a cryptocurrency in which to invest, you can start with the top 5 on the list and analyze them in terms of their price, trading volume, price fluctuations, trending (biggest gainers and losers), as well as other available data. Study the data, read what others are saying about the crypto – both the good and the bad, before making an informed decision.

David Drake is Founder and Chairman of LDJ Capital, a multi-family office which deals in various funds worldwide with over $1.5 trillion in assets, and maintains over 50+ global directors and family office partners.

More recently, Mr. Drake is viewed as a leader in cryptocurrency. Mr. Drake saw the value of digital assets when everyone was avoiding it. It all started in 2011 when Mr. Drake collaborated on the JOBS Act to create new laws underlying all fundraising in the U.S. for all ICOs. His crypto hedge funds hold crypto, ICOs, and FinTech equity as seed investments to help new coin to be made via ICOs. His company also offers bridge financing to seed upcoming ICO’s.

Mr. Drake was born in Sweden and is fluent in six languages. He holds an MBA in Finance and an MA in International Law and Economics from George Washington University in DC where he was awarded the Wallenberg Scholarship for academic merit.