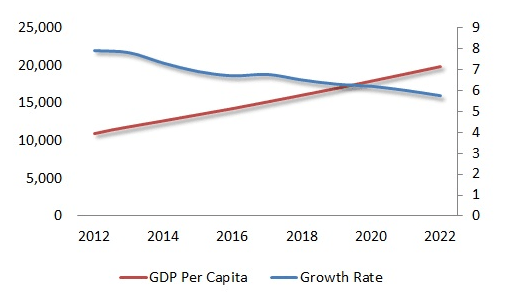 In the past, Chinese growth was too much fueled by credit. Now it is becoming more sustainable and the emphasis is shifting on living standards, poverty reduction and environmental protection.

In his annual work report, Chinese Premier Li Keqiang said on Monday that China aims to expand its economy by around 6.5 percent this year, or the same as in 2017.

However, numbers do not tell the full story. In the past, credit growth was almost twice as high as the growth rate. Now the government’s attention is on credit risks and higher-quality growth. The latter is exemplified by rising per capita incomes, eradication of poverty and the struggle against climate change.

Barely a decade ago, China still enjoyed double-digit growth. Today China’s growth is slowing relative to its past performance. Historically, that is the norm with all industrializing economies.

At the same time, rapidly-rising living standards are supporting thriving consumption. This narrative can be illustrated with the first term of President Xi Jinping and Premier Li Keqiang and their projected next half a decade, assuming the current trend line and peaceful conditions will prevail (Figure 1).

Between 2012 and 2022, Chinese growth rate could decelerate from 7.9 percent to 5.8 percent. Despite deceleration, living standards will double. In 2012, Chinese GDP per capita income was about $11,000. By 2022, it may increase to $20,000. That means that per capita incomes are likely to grow by 6.7 percent in China. That’s more than four times the comparable U.S. figure in the same time period.

In other words, the past “high-speed” growth, which was typical to intensive industrialization, is morphing into “high-quality” growth. Due to China’s huge size, the repercussions will reverberate around the world.

President Xi Jinping’s idea of “Chinese dream” is predicated on greater economic focus on quality and equality of development.  In the coming years, that is likely to mean investments in social equity to reduce uneven coverage of pension and health care insurance nationwide and better public services

It is also likely to translate to rejuvenation of rural areas, scaling of farming operations, increased spending on high school education and vocational training, affordable housing and extended rural land leases - and an aggressive push to eradicate poverty.

In his report, Li Keqiang said the government would seek to lift a further 10 million out of poverty in 2018, adding to the 68 million already relieved of that burden over the past five years (Figure 2).

China’s progressive eradication of poverty is a world-historical milestone. 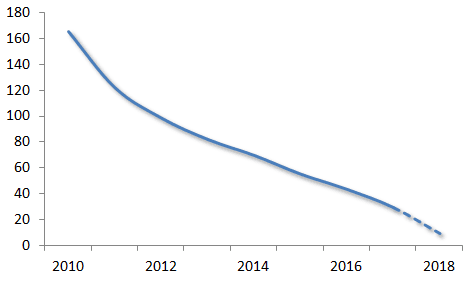 A key aspect of new growth is Beijing’s goal to restore blue skies over the mainland by cutting pollutants dramatically by 2020, coupled with efforts to attract investors to put substantial funds into environmental rehabilitation.

In aggregate terms, China has been the greatest polluter worldwide since the early 2010s. Yet, emissions must be measured on per capita terms, which allow true international comparisons because population size contributes significantly to countries’ aggregate pollution levels. In this comparative view, per capita emissions in China have never exceeded those in Germany and the US (Figure 3). 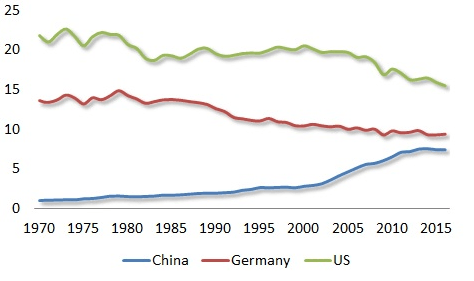 In other words, even at the peak of industrialization, Chinese per capita emissions were only one third of the peak level in the US and only half of the corresponding German level.

It should also be recalled that, historically, the heavy phase of US and German industrialization took place a century ago. So when these two countries were in the stage of development in which China is today, their per capita emissions were far higher relative to China.

In China, it is imperative to cut down emissions as fast as possible, to ensure higher-quality growth. But it would be far, far more beneficial internationally if the major advanced economies would reduce their wasteful living styles, which in the 21st century will penalize future generations in emerging economies.

Double standards benefit nobody and only delay the inevitable.

Dr Dan Steinbock is the founder of Difference Group and has served as research director at the India, China and America Institute (USA) and visiting fellow at the Shanghai Institutes for International Studies (China) and the EU Center (Singapore). For more, see https://www.differencegroup.net/

The original commentary was published by China.org, China’s official government portal, on March 9, 2018.