A question that was recently emailed to MarketCycle Wealth Management via our website’s Contact Page: “Why are you holding protective assets in MarketCycle’s client accounts if the stock market and economy are currently as strong as you say? You’ve never held protective assets under these conditions before since, as you say, it might put somewhat of a temporary drag on portfolio performance.”

I remember Black Monday (October 19, 1987) as if it were yesterday. I was seeing a huge number of patients that day and, fortunately, I barely had time to worry about what was happening with the stock market. Several years earlier, I had already developed one of the first Relative Strength Analysis systems (it is still used globally by professional investors) so my interest in the financial markets was already strong. I pushed a large television into the clinic hallway and turned the sound off so that I could take an occasional glance at it while running between treatment rooms. Back in 1987, large televisions were the size of a cow and likewise, thicker front to back than they were from side to side… and twice as heavy as any respectable cow would allow itself to weigh.

On that day the market dropped substantially, literally all day long, 25%, and it was frightening. Importantly, today there are circuit breakers in effect that would stop any attempted one day repeat of the 1987 drop, but not back then. The market recouped all of its losses during the next 12 months, so it ultimately wasn’t too bad, but this still had a profound effect on my young-ish brain. It has effected my thinking even today, a sort of beneficial PTSD, a profound lesson that helps me to always remember that risk is more important to watch than are profits. This is an important lesson that few ever learn.

What caused 1987’s drop? President Reagan had already drastically lowered the U.S. income tax rates, then in 1987 he appointed a a new Federal Reserve Chairman (Greenspan) who continued to raise interest rates, and then he placed strong trade tariffs on Japan (the China of the 1970-1980 era), and then trade tariffs caused corporate earnings to drop, and then the stock market tumbled because the (stock) Price (compared) to (corporate) Earnings (then became too expensive). Deja vu?

From the ultra-conservative Investment Business Daily: “Regarding trade tariffs, Congress has given presidents vast discretion to trifle with Americans’ freedom, the nation’s prosperity and the world’s hard-won architecture of efficient commerce. Now this capacity for mischief is in the hands of someone who knows next to nothing about the one thing – business – he is supposed to know something about.

Protectionism [trade tariffs] are a scythe that slices through core conservative principles, including opposition to government industrial policy and to the government picking winners and losers, and to crony capitalism elevated to an ethic of ‘A Few Americans First.’ Big, bossy government does not get bigger or bossier than when it embraces protectionism, government dictating what goods Americans can choose, and in what quantities and at what prices. Down the decades, Trump has shown an impressive hostility toward free trade.”

And from Donald Trump’s campaign: “Trade wars are good and easy to win.” On March 11, 2018 President Trump stated: “I’m all about trade wars.”

Ben Inker of GMO Research: “As a general rule, when you add the word ‘war’ to your description of an event, it’s a pretty strong suggestion that it is unlikely to be either good or easy.”

Frederic Bastiat, 1825: “When goods do not freely cross borders, soldiers will.”

Alan Greenspan: “Protectionism will do little to create jobs and if foreigners retaliate, we will surely lose jobs.”

Benjamin Franklin, 1776: “No nation was ever ruined by free trade.”

Me: Throughout history, trade tariffs have destroyed 10x more jobs than they created. A country loses 100,000 already established jobs for each 10,000 new jobs created via placing protectionist barriers (tariffs) on free trade. In the United States, a growing trade war would most harm the following major “Trump Country” industries: agriculture & farming, aircraft & vehicles, electrical & industrial machinery. We do need FAIR free trade, but a trade war will likely prove to be the most incorrect option. Historically, free trade has accounted for a full 50% of the global GDP.

So, what am I watching like a hawk? Corporate earnings, which are currently still very bullish and have clearly been heading steadily higher since early 2016, but they may weaken going forward.

What else worries me? As I wrote in a prior blog, during 2017 (and January of 2018) we went through a “melt-up” in the stock market where euphoria reigned and the market got way ahead of itself. In January 2018, the big financial institutions began selling some of their stock positions to the euphoric “Mom & Pop” retail investors. During periods of euphoria, just like in 1987, the market can correct strongly even while market internals and fundamentals appear strong. One way to measure this is with MarketCycle’s proprietary Hindenburg Double Omen. Since 1980, this indicator has only triggered just prior to Black Monday in 1987… and then nothing until just before the tech bubble burst in 2000… and then again as appears on this chart (and it has triggered 5x during the past 12 months, showing extreme and building euphoria!). It has never triggered without an over-valued market correction occurring. The dips on this chart are bigger than they appear. The S&P-500 is shown as the black line below. In 2008 it dropped 55% and in 2011 and 2015 the drops were close to 20% (1987 dropped 25% and 2000 fell 45%). 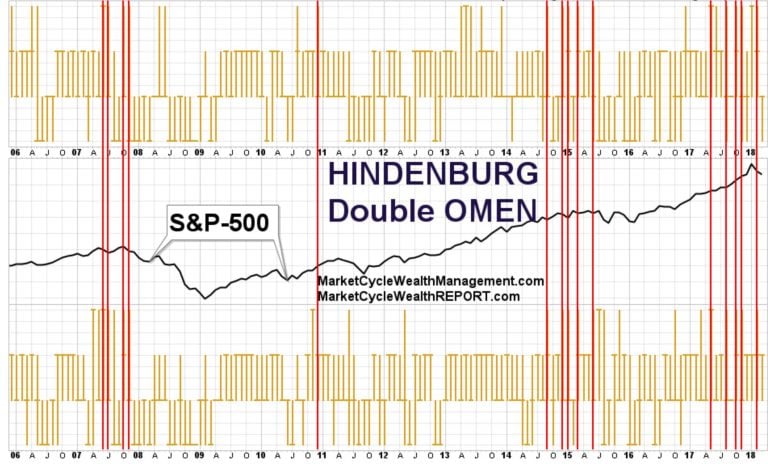 On Thursday (yesterday, March 22), both the S&P-500 and the DOW finally broke (down) out of their two month consolidation pattern and technical analysis would say that they have further to fall before recovering and moving higher again. I believe that the DOW, shown here, (and the S&P-500) might want to pierce through the 200 day moving average (red/green lines) and move even a bit lower. But we have to remember that market corrections are common, temporary, normal and that they are necessary to the overall health of the stock market. The market gains and then packs down the gains in order to form a base from which to rocket higher again… repeat… repeat 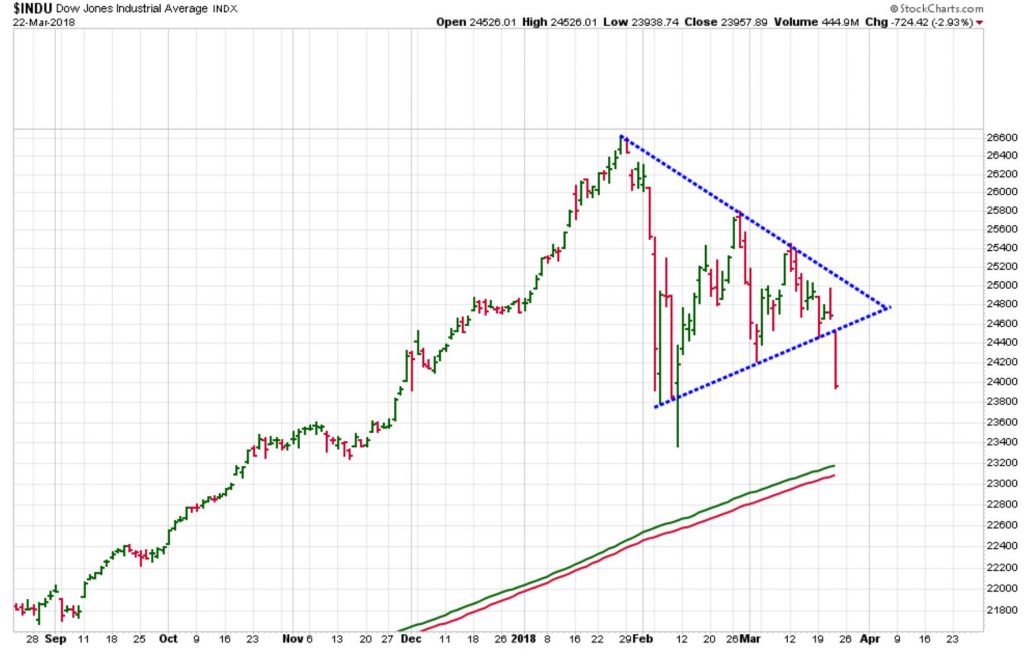 CNBC headline after the DOW closed down 725 points, causing the stock futures market to fall even more. 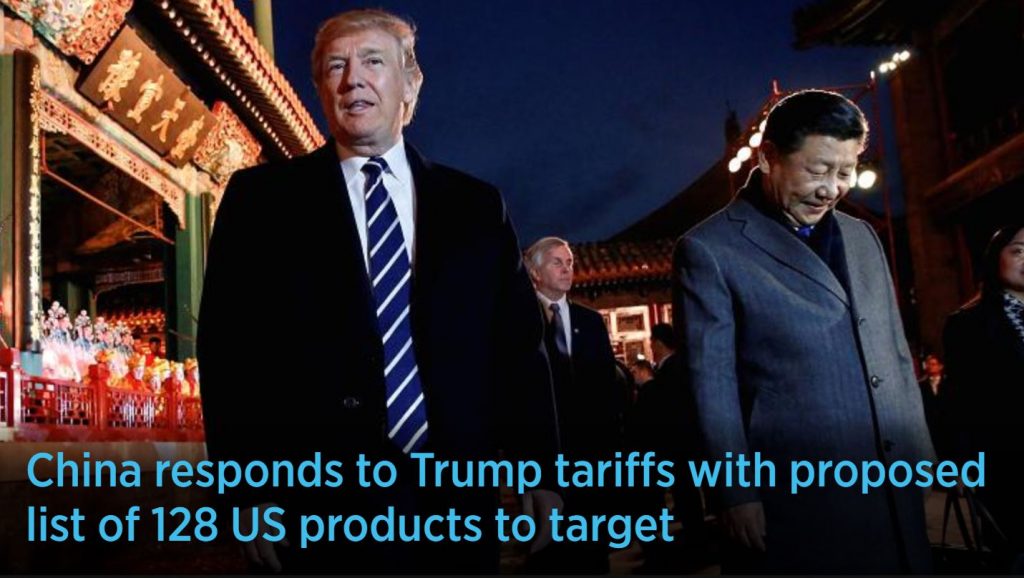 The general opinions of corporate CEOs & CFOs of major companies on whether they support or oppose Trump’s trade tariffs: 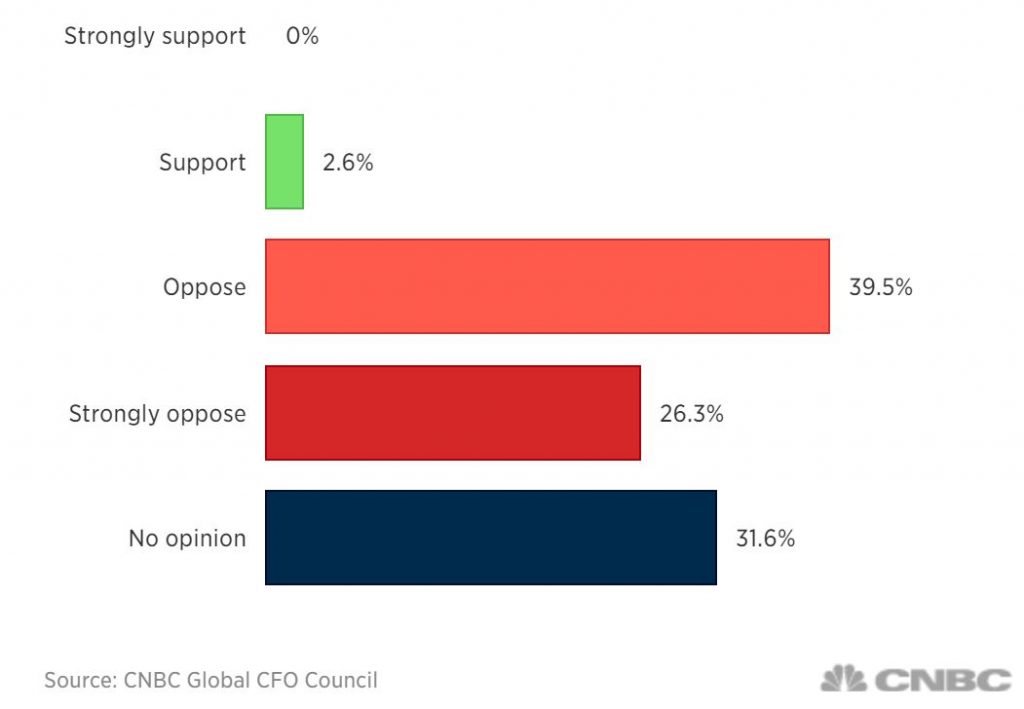 What am I already doing to protect client’s accounts? We recently began holding some protective ‘dynamically-hedged VIX products’ that won’t actually kick in unless stocks take a tumble (they have a delayed response), plus we hold some physical gold and some ‘socially responsible’ highest-quality corporate bonds and some extended-duration Treasury-bonds; these things all went higher on Black Monday.

So, the odds of a repeat of 1987’s big one day stock market drop are extremely low, especially with circuit breakers still in place, and the chances of an outright economic recession within the next three months is less than 0.5%, which is ridiculously low, but obviously a near-term (temporary) correction is in process. We need to be cautious and to be ever watchful, especially since we are already likely in the second half of the late-stage of the current bull market that started way back in the Spring of 2009. IMO, investors should still hold quality global stocks in a reasonable amount since we clearly remain in a bull market, but they should also hold protection even if this positional holding cuts slightly into profits. We have to be smart… we have to play more aggressively only when the odds of winning are in our favor.

What is the lesson? Watching risk is more important than watching profits! One’s investment account should be positioned and allocated based on current conditions. Current conditions are gleaned based on risk and where we are in the MARKET CYCLE.

SUMMARY… a bit more complex: MarketCycle has been correctly bullish on stocks since April 2, 2009. In a recent private email to clients, in advance we called the exact day and the exact price of the February correction bottom and then correctly stated that it would not be a simple “V” shaped bottom, but would be more volatile than that and we also suggested that perhaps we had not seen the lows of this recent, multi-month market correction. On March 22, I wrote to clients and suggested that the the S&P-500 might temporarily dip below the recent February lows and briefly touch around 2500. That was yesterday, before the market opened and before the DOW tanked 725 points by the market close. Right now, in the immediate near-term, the market could bounce up because of the extreme depth of yesterday’s fall, but I still currently believe that the market will ultimately seek lower before seeking higher. For new investors, buying in ‘lower’ will be a good opportunity.

Looking forward? Eventual new S&P-500 highs are still in the cards, but as of today, we don’t know exactly when. By 2029, investors will be shocked at how high the stock market will be and they will have forgotten how frightening the two recessions between now and then had been. MarketCycle’s goal is to profit during the recessions while riding the bull all of the way to the end.

And now this event was recently added to the trade-war punch bowl… a change in the Chief Economic Advisor to the President: The brilliant Gary Cohen recently quit the White House because President Trump simply would not listen to his economic advice. This position of Chief Economic Advisor to the President will now be filled by the less-than-brilliant TV personality Larry Kudlow (who, in the White House, will be keeping company with the also less-than-brilliant quack-economist Peter Navarro, whose overly-simplistic win/lose message is to strengthen the United States by destroying China).

Larry Kudlow recently stated: “Rich people are the best people. Wealthy folks have no need to engage in corruption.”

He is famous for finally switching from long-time bearish to bullish in late 2000, right at the peak of the technology bubble (where the S&P-500 then dropped 45%). Then, at the bottom of this gigantic bear market he stated that “We need to start a war to revive the American spirit. The shock therapy of a decisive war will elevate the stock market by a couple-thousand points.” True to form, in very early 2008, right before the housing/financial bubble burst, he stated that there was absolutely no bubble or danger in the market (and the S&P-500 subsequently dropped 55%). He loves trade-wars and tariffs and like President Trump, he believes that the ultra-wealthy are simply smarter than everyone else and thus, they deserve to be rich and to be in positions of leadership. IMO, perhaps people should always just do the opposite of what Larry Kudlow advises… but now he has the President’s ear.

Quarterly portfolio performance will be shown in our next blog.

MarketCycle Wealth Management is in the business of managing and protecting people’s investment accounts for a low fee; the first three months are at no charge.

LINK to our members only site: https://MarketCycleWealthREPORT.com/