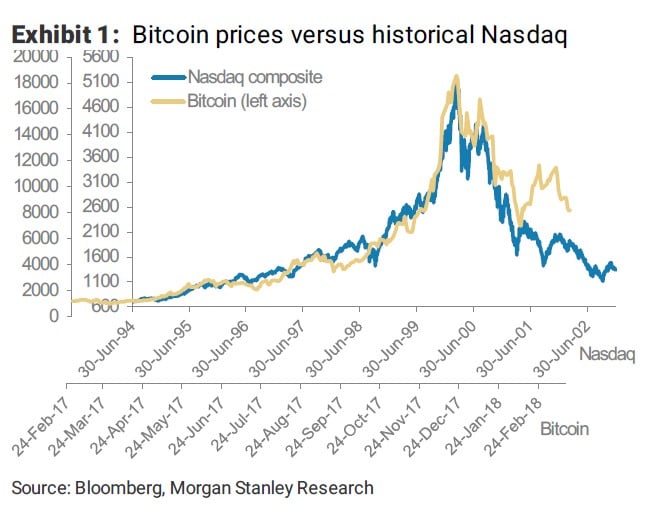 The bitcoin price has certainly had its ups and downs, and multiple analysts have compared its skyrocketing value to the tech bubble that popped in the early 2000s. Now there’s an interesting twist on this same perspective as one firm compares the recent bitcoin price weakness to the popping of that tech bubble.

In fact, one of the firm’s analysts says the popping of the bitcoin price bubble is occurring at 15 times the speed at which the tech bubble popped in the early 2000s, highlighting the extreme volatility that has ravaged the market for months.

Of course, the bitcoin price has had its ups and downs, although it’s been trending mostly downward since the beginning of the year. In a note this week, Morgan Stanley analyst Sheena Shah compared the recent bitcoin price weakness to the weakness observed in the NASDAQ in 2000. As you can see, the trend lines are remarkably similar:

According to Shah, there have been four bitcoin bear markets since 2009, not including the current one. Each of the previous bear markets have lasted an average of five months and followed a two- to three-month rally. However, because there are so few examples, she notes that it’s impossible to predict whether the current bear market will follow this same pattern. During these bear markets, the bitcoin price has plunged by between 28% and 92%, so the recent 70% decline wasn’t exactly unusual.

Shah also points out that the most recent bitcoin bear market has been marked by three pullbacks, two of which were followed by short rallies of 28% and 57%, or an average of 43%. The bitcoin price has tumbled by 45% to 50% in each of the recent bearish waves. Looking back to 2000, the bear market in the NASDAQ saw give pullbacks with an average decline of 44%. The rallies during the NASDAQ bear market ranged between 28% and 50% and averaged 40%. 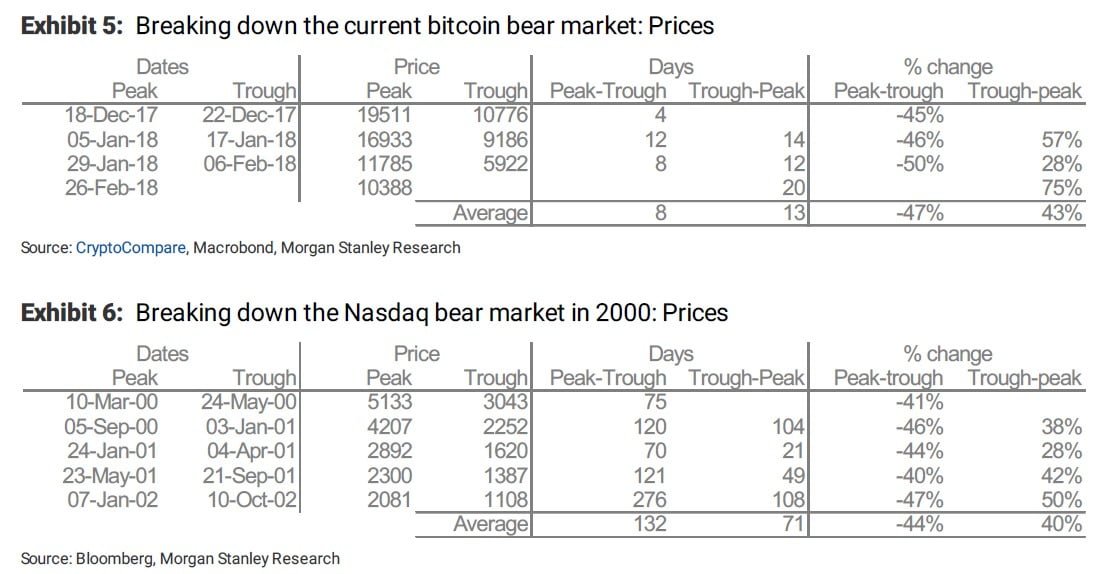 One key difference between the bitcoin price weakness now and the popping of the tech bubble in 2000 is the rate at which the market is moving. According to Shah, the recent rallies in the bitcoin price and the NASDAQ rallies in 2000 are also similar, ranging between 250% and 280% during their “exuberant” periods.

However, the bitcoin price rally happened at about 15 times the speed at which the NASDAQ rally occurred.

She noted that bear markets tend to be marked by growing trading volumes, and the recent bitcoin bear market followed this same pattern. According to Shah, bitcoin trading volumes have surged nearly 300% since December. Meanwhile, each of the short-term rallies was marked by tumbling trade volumes, as other analysts have noted previously. 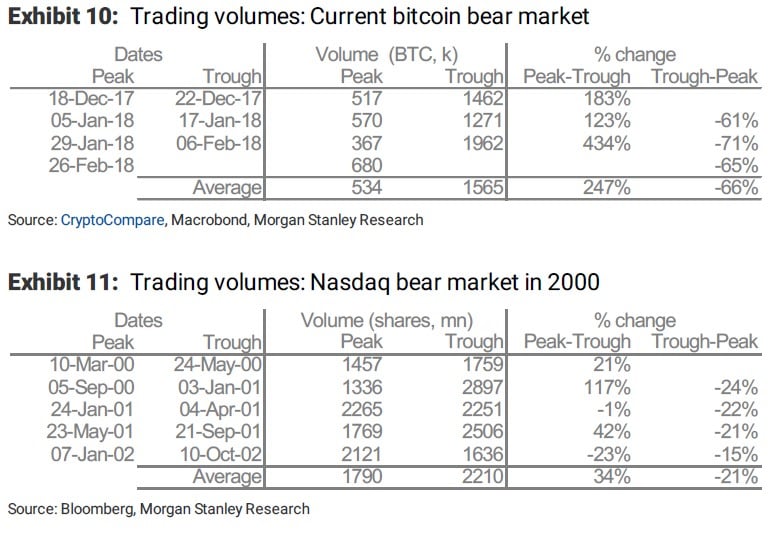 Overall, bitcoin trading volumes have remained low recently, and other analysts have noted recently that this could signal that interest in the cryptocurrency just isn’t what it used to be. Interestingly, Shah’s graph seems to illustrate a break from this trend of rising volumes during this latest bitcoin bear market. 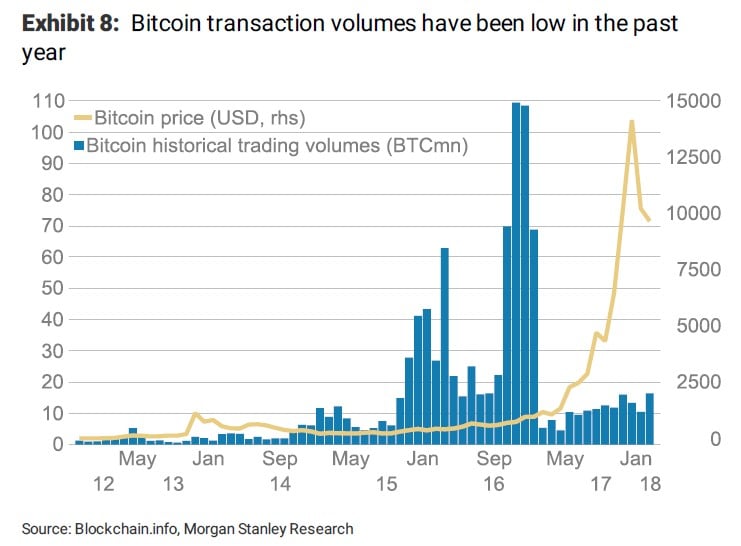 Will the bitcoin bear market continue?

Shah believes that the bitcoin price and the valuation of all other cryptocurrencies will be based on what, if anything, they can be used for. She said the market remains in “price discovery mode” for all cryptocurrencies, and as of now, bitcoin’s utility has yet to really reveal itself. Although it was designed as a way to make payments, bitcoin can’t yet be used to purchase very many products or services.

As of the time of this writing, the bitcoin price continues to tumble and now has fallen below the $8,500 market on CoinDesk. Shah said she’ll be watching for a sudden spike in the bitcoin price across cryptocurrency exchanges to see if the bearish trend will continue. At this point, bitcoin remains fragmented, with the price varying across each exchange.