Know what you own, and know why you own it.” – Peter Lynch

Money flowed into passive investment vehicles at an ever-increasing rate in 2017. It was a record year for these products designed to replicate a stock market index and agnostically own a basket of securities without discretion. As investors who build our portfolios from the ground up through careful security selection, we think the ramifications of this passive ideology should be revisited, as we believe its impact will be felt in our markets for the foreseeable future.

First, here’s the picture from Morningstar showing the $685 billion that moved into passive indexes last year (orange bars), some of which was at the expense of actively managed funds (green bars), followed by a graph of flows into passive since 2006: 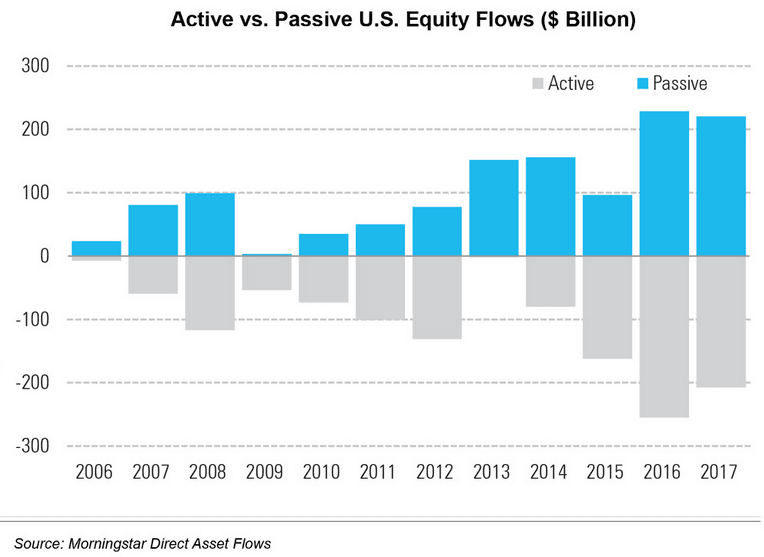 Author and investment analyst Humphrey B. Neill once warned, “Don’t confuse brains with a bull market.” He said this well before indexing came into vogue. We wonder how he would characterize that same concept today, in a market where brains are an unnecessary burden for passive investors, who are required to check them at the door when entering the room of investing.

As we enter this ninth year of a bull market, it certainly has become easy to become agnostic or atheistic with regards to investing. The rear-view mirror shows that doing so has paid handsomely. Despite this, any experienced investor also understands there are no atheists in foxholes. At some point, those who want to remain in the game will need to spend time in the trenches. As Peter Lynch’s quote above indicates, if you don’t know what you own and why you own it today, you will simply not possess the strong hands necessary to sit through a war, or perhaps even a small challenge.

In today’s market, the battlefield is being set, in part, by the dumb-money that has flowed into the indices. Index investing works well in markets favoring growth vs. value, mainly because of the nature of how these indices are created and capitalization-weighted structure they employ. There have been four major periods since 1929 where “growth” has beaten “value.” We currently sit at the tail end of the longest stretch where that has been the case, creating the biggest differential between the two we have ever seen.

Given all of this, there are a few things that need to be understood:

Or 1999, when the largest 25 contributors to the S&P 500’s performance provided more than 100% of the S&P’s return. In that year, the average of the other 475 companies contributed negatively to index returns, and over half the index (257 of them to be exact) actually saw their stocks decline. All of this turned on its head on March 10, 2000, when that bubble popped.

With a quick look at last year, you can see the parallels: 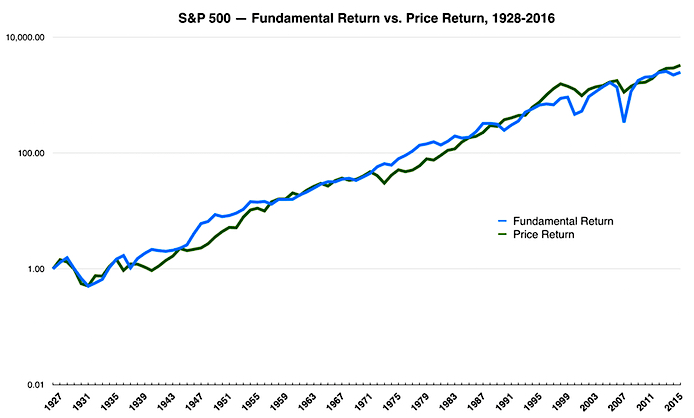 We do not pretend to know when the popularity of the ideology surrounding passive investing will exhaust itself or whether it will ever end. What we do know is some of the ways it has impacted or exacerbated today’s market. We also know that market fundamentals ultimately revert to long term averages, and to us the current circumstances seem out of whack. At market extremes, there is money to be made that we must chose to forego. As always, we will gravitate toward owning high quality businesses offered at attractive valuations. It is our belief that our value opportunity set is extremely attractive right now relative to what the S&P 500 Index and other disciplines might offer.