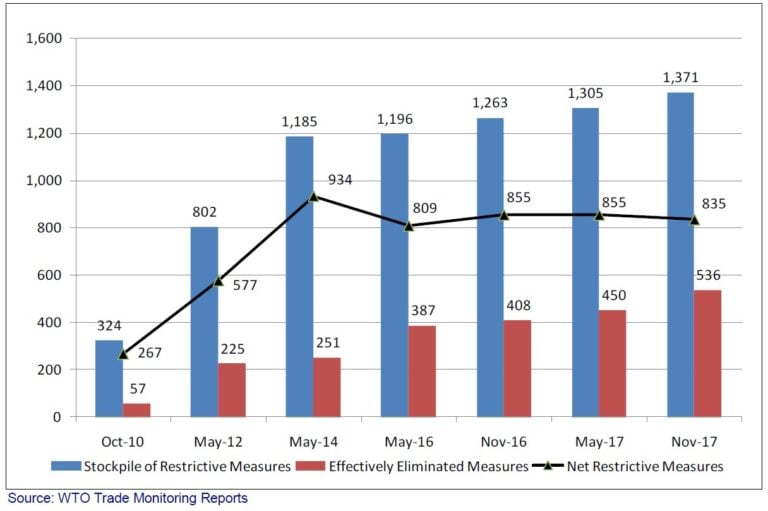 Keeping up with equity markets in 2017 and early 2018 has felt like scaling an Alpine mountain range: each time we reach a new peak another lies beyond to conquer. The ascents steepened as we struggled to explain how prices of stocks and bonds simultaneously increased. We looked at the US tax reform, deregulation and infrastructure plans and concluded that, given the backdrop of globally coordinated central bank liquidity, even modest fiscal progress would support economic growth and the markets. What could go wrong?

Well, investors looked down from that last, late January peak and fear set in—fear of nascent inflation, fear of an unexpected hawkish turn in the Fed’s monetary policy. Dark clouds started to form. Markets sold off in early February amid a spike in volatility that sent analysts searching for answers. Finding data and bureaucrats instead of black swans, investors resumed the upward trek.

That is, until late February when the US administration's plans for tariffs on steel and aluminum introduced a counter-threat to its heretofore pro-business fiscal policy. The effects of these measures will depend on the scope and extent of retaliation from trading partners, and we examine some data to shed light on these below. We also look at labor market statistics as we consider what new Fed Chairman Powell and the FOMC have to review as they proceed along the data-driven path set by their predecessors. We expect calmer heads to prevail on the latest market disruptor, with stabilization resulting from corporate earnings boosted by tax reform. However, we also anticipate wider volatility swings as record margin borrowing has resulted in high stock market leverage, this compounded by Fed rate hike uncertainty. On balance, the LISI Investment Committee has determined that, for the short term, conditions do not warrant major adjustment; at our late February meeting we elected to maintain current equity-leaning Tactical Asset Allocations.

Tariffs and other protectionist measures carry the two-fanged threat of being both inflationary and stifling for economic growth. The inflationary impact is direct as domestic prices rise in response to higher prices for intermediate goods—most protectionist measures target metals, plastics, chemicals—that manufacturers pass through to consumers. Think autos, appliances and beverages. The negative economic impact results from a dampening effect on sales, both domestically and through exports. This is why Industrials experienced the biggest drop among S&P GICS sectors on the day of the US announcement. After the drop, equities ended February relatively flat for the year with the S&P up 1.25% (see table below).

The equity market's reaction to the tariff announcement reflects uncertainty on how broad US protectionist policies will become, and the severity of ensuing countermeasures taken by other nations. Add to this an incipient US retreat from multilateral trade agreements as well as trade disputes over lumber, grains, meats and other commodities, and wariness by investors is understandable.

With markets already jumpy about inflation, we expect volatility to continue until there emerges some clarity on the path of tariffs and other protectionist measures. The recent downdraft in equities stopped the onward march of price-to-earnings ratios in the US. After closing 2017 at 22.3x, the Price-to-Earnings (P/E) ratio of the S&P 500 rose as high as 23.3 in late January (seemingly headed to a dot-com 26x level) before falling back to 21.9x as of February 28th. We expect 1Q18 financial results to show a widespread boost in corporate earnings largely fueled by the business-friendly tax cuts. This, in turn, should further reduce the P/Es on the major indices.

The Trump administration's tariff announcement fits into a pattern of increasing global protectionism that since the Great Recession has been growing along with the rise of nationalist and xenophobic political parties and leaders. The World Trade Organization (WTO) tracks anti-trade activity among G20 countries and reported a stockpile of trade-restrictive measures of nearly 1,400 as of late 2017, a stark increase from only about 300 in 2010 (see chart below). 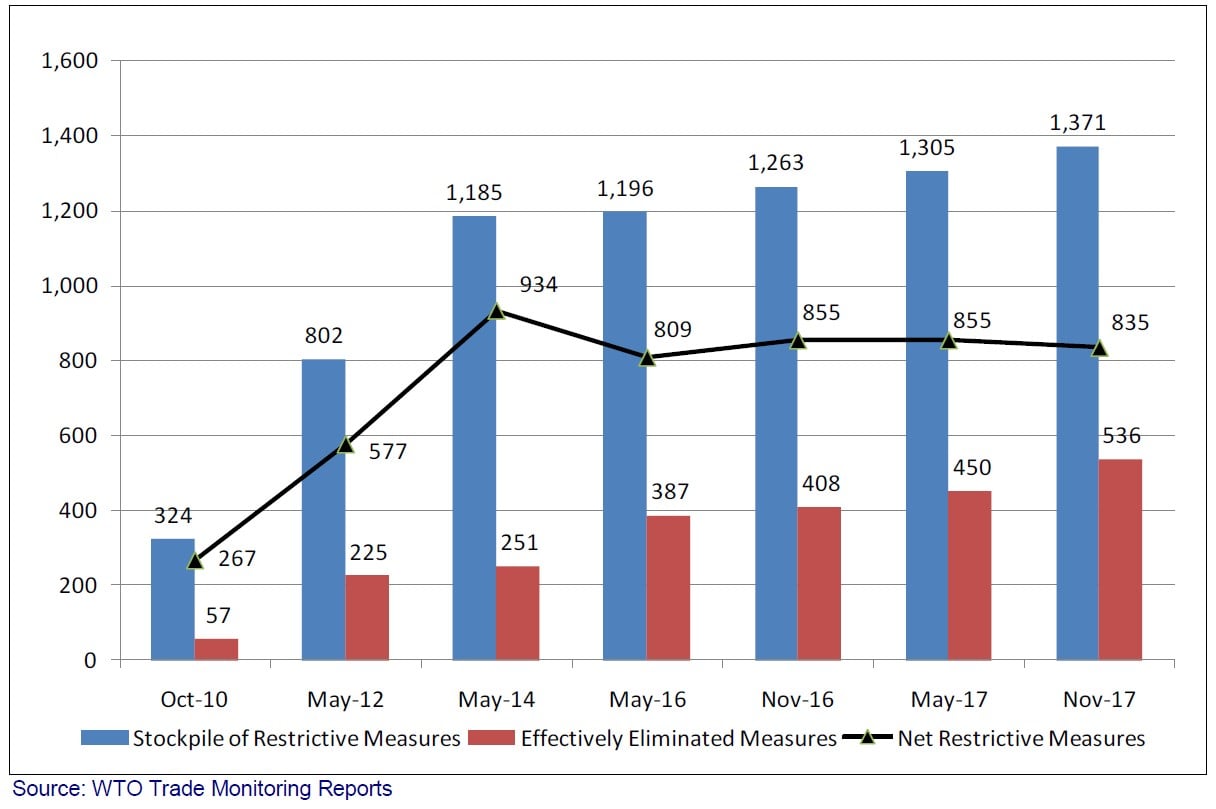 Eliminations of trade-restrictive measures have also trended up, such that in the last couple of years the level of net restrictive measures has leveled off in the 800-850 range. However, that looks to increase given pressures building against some of the largest trading blocs, including the European Union after Brexit and now Italy’s parliamentary election results on March 4th, in which Beppe Grillo's anti-EU, anti-immigration Five Star party won and will build an uncertain coalition. Changes to the North American Free Trade Agreement (NAFTA) seem to be moving in fits and starts, while the new steel tariff would affect Canada and Mexico, two of the top five steel exporters to the US (Canada 1st with 19% and Mexico tied with Russia at 9%)1.

International economic growth continues to build, but protectionist measures in the form of quotas, tariffs, and countervailing duties can eat at that strength. Further, confidence can be fickle and it has just reached highs across the major developed markets. The Univ. of Michigan US consumer confidence survey hit a 14-year high in October 2017, while in January 2018 Europe reached an 18-year high, and Japan a 5-year high in consumer confidence. Purchasing Manager Indices show similar business optimism (see charts below).

The market has made much of a non-committal stance by the Fed on holding to three 0.25% rate hikes in 2018. We think Chairman Powell's early statements at the helm of the Fed fit well with our expectation that he will continue the data-driven decision making process heralded by his predecessor. We are encouraged by the Fed's intent to study inflation measures for their appropriateness in guiding monetary policy deliberations by the FOMC. Even if a fourth quarter-rate hike comes to pass in 2018, overall rates are still low and we would not expect a market shock. Fed funds futures reveal a small percentage of investors anticipating a 0.5% rate hike at the FOMC meeting in March. Were that to happen, we would agree with bond bears that the potential for a 2004-06 rate hike pattern (3% over 18 months) may come to pass.

US Treasury 10-yr Note yields broke out of the 2.2%-2.6% range experienced over most of 2017, peaking above 2.95% during the month of February and settling at 2.86% on February 28th (see table below). Importantly, the yield did not exceed a technical level of 3.0%, which could have tipped bonds into a greater selloff. As we discussed above with respect to equities and the anticipated effects of new US steel and aluminum tariffs, US Treasury yields also respond to market shocks. The 10-yr UST Note has drifted in the high 2.8% range since the tariff announcement as investors are wary of inflation and, again, as the Fed signals the potential for more than three 0.25% rate hikes this year.

Other factors may also contribute to higher yields. We expect incipient tapering and eventual balance sheet unwinding by foreign central banks to reduce demand for US Treasury securities at the same time deficit spending by the US Federal government creates the need to issue more debt. That effect alone may contribute to higher US Treasury yields. The expectation of rate hikes abroad as reflation begins may also pressure US yields.

For a time in early 2018 analysts expressed concern that an inversion of the 10yr vs. 2yr US Treasury yield might signal a coming recession, just as it has in the case of every US recession over the last half-century. The recent spike in bond yields has turned the trend around (see chart below), though the unfolding of recent trade policy changes and countermeasures could provide fodder for further worry.

Stagnant productivity growth with diminished labor force participation does not bode well for the long-term health of the US economy as more and more baby boomers retire and a smaller base works to support the country. Labor force participation, the employed as a share of the number of working age adults, has declined over the last decade from about 66% in 2007 to less than 63% now (see chart below). For perspective, over that time, 7.8 million people reached the retirement age of 67, while some 500,000 fewer people are working2.

A smaller supporting labor force need not endanger growth if technological advances boost productivity. However, productivity has also declined since prior to the Great Recession (see ranges bracketed by arrows in the chart above). Some observers have noted that protection of industries through tariffs and other anti-trade measures can also lower the incentive for companies to innovate. That makes sense from an economic perspective, and the result may point to a limited probability that productivity regains the ground it lost over the last decade. Initial indications are that corporations are spending a significant portion of the tax reform windfall on share buybacks and dividends. The effect of a shrinking labor force might be softened were new technology to emerge, much like internet and computing speeds that have seemingly improved productivity in the last two decades (though apparently not enough). Blockchain technology could potentially provide that boost.

We see continuing volatility in the markets, particularly equities, though broad-based economic strength is likely to shake off small shocks and return to stability. Heightened market sensitivity to QE tapering, inflation and trade skirmishes is likely to continue. Yet, we still see support for equity valuations in improving corporate earnings, and the market's resiliency of recent years combines with solid economic underpinnings to give us confidence that our overweight equities allocation remains justified. Accordingly, across asset classes we favor the following in terms of allocation:

With the length of the US economic expansion bounding toward a new record, it makes sense that investors should worry about potential instigators of trouble. Wading through pristine Alpine streams fed by the abundant liquidity of accommodative central banks, investors have enjoyed reasonably good returns over the last few years, particularly the last one. Still, with budding inflation, rate hike uncertainty, and now the potential for trade wars, investors should brace for the rapids of heightened volatility. The route to that next market peak may prove a tumultuous one.