Arnav Sheth and Tee Lim contribute to the literature on the performance of factor-based investment strategies through their December 2017 study, “Fama-French Factors and Business Cycles.”

At this year's Invest For Kids conference, Sam Zell spoke with Hyatt CEO Mark Koppelman about the current investment environment. Zell is a Wall Street legend. He was a pioneer of real estate investment trusts and has made a fortune investing in undervalued real estate properties and holding them for the long-term. He once described Read More

The authors then examined the factors’ behavior in each of these periods by looking at their cumulative returns. They also looked at the factors’ behavior after a yield-curve inversion starts and ends, as the relationship between yield-curve inversions and recessions has been well-explored. Finally, they tested the predictive power of the term spread on the NBER recession indicator.

For the economic stages part of their analysis, Sheth and Lim’s data set covers the period April 1953 through September 2015. For their analysis of the Fama-French factors’ behavior following a yield-curve inversion, the authors’ data starts in 1966. Based on the average lead time established in prior research, they estimated a lag of 12 months as the time it takes for mainstream markets to price in yield-curve inversions.

There have been 10 NBER-designated recessions of varying durations since April 1953. The shortest recession, which lasted six months, started in January 1980, and the longest recession, which lasted 18 months, started in December 2007. The median recession length was 10 months. Thus, the authors measured the cumulative returns for 10 months following the start of an NBER-designated recession, and then took the average of the cumulative returns for each factor across the 10 recessions.

The term spread between three-month Treasury bills and 10-year Treasury notes is used to determine when an inversion starts – e.g., when the three-month rate exceeds the 10-year rate. There have been eight inversions and seven recessions since 1966. An inverted yield curve has successfully forecasted, within six quarters, six of those seven recessions. A false positive occurred in 1966 when an inversion was not followed by a recession within six quarters.

The most recent inversion, in January 2006, also resulted in another false positive. It was followed by a recession – but in December 2007, more than six quarters later. While both false positives did not successfully predict a recession within six quarters, it was nevertheless true that, in both cases, the economy slowed. 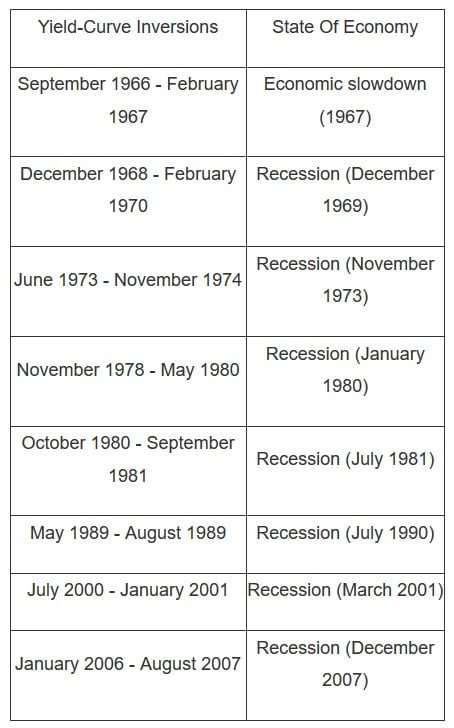