The Wells Fargo & Co (NYSE:WFC) “smackdown,” as a Chicago Tribune headline referred to it, is sending a powerful message to banks: “shape up or else.” The surprise move by Fed Chair Janet Yellen, perhaps the most serious against any bank to date as it will seriously limit growth until the situation is resolved. During this period of time competing banks could use the opportunity to grab market share, a Moody’s report observes. When will the pain end? This might depend on when the discretionary concerns of the bank’s regulator are met. 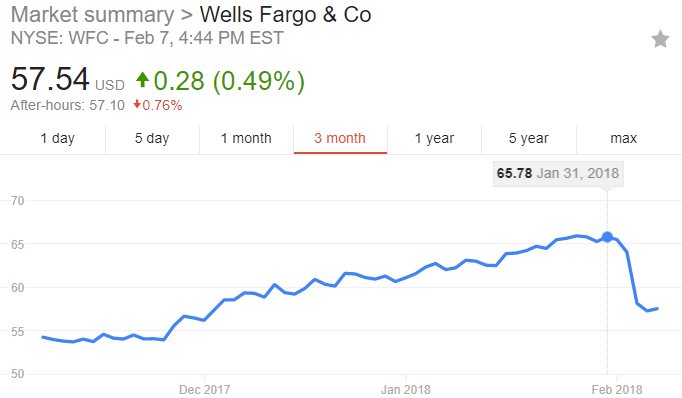 Yellen’s parting shot as Fed Chair was to put the arm of responsibility on a bank’s board of directors to ensure that the organization's management practices are aligned with the law. The bank settled charged it created creating millions of bogus consumer banking accounts, taking money directly from the pockets of their customers by charging fees for products that they did not agree to purchase.

“When it comes to abusive and harmful business practices, Wells Fargo broke the bank,” Tribune columnist Robert Reed wrote. The move sends “a powerful message to other U.S. banking giants: They must aggressively and quickly stomp out any sleazy management practices or the Fed will hold their bank directors directly responsible for any missteps.”

Investors in the banks have largely been responsible for paying fines of banks that have gone rogue. Since the 2008 financial crisis, banks paid a record in fines, near $321 billion, according to Boston Consulting Group research widely reported last year.

Authorities have increasingly started to hold individuals who commit criminal acts inside banks responsible for their crimes. Previous to this punishments harmed the generally honest collective group and failed to discourage the bad behavior – and in many notable cases put the offending banks at a significant disadvantage.

Looking at the Fed sanctions, Moody’s acknowledges the move is credit negative to Wells Fargo not just due to financial reasons related to paying fines. The fines “threaten to increase client attrition and undermine its franchise, especially since competitors will likely use Wells Fargo’s hobbled status to attract clients for themselves.”

The concern that holding banks accountable for criminal actions could result in weakening of a systematically important institution is the basis of the “Holder Memo,” penned in 1999 by Eric Holder, the many who would eventually become US Attorney General under Barack Obama. His logic was grounded in the downfall of Arthur Anderson during the Enron episode when the entire corporation was criminally charged for the actions of those who participated in what was determined to be a criminal cover-up. Not wanting to destroy an otherwise successful US corporation and the jobs that depended on it, he gave prosecutors the leeway not to prosecute systemically significant organizations. Holder would later acknowledge that not punishing bank executives for wrongdoing was imprudent.

This Holder doctrine, which had predominated Wall Street thinking on the topic, has now morphed into a mean reversion. In her final act at the Fed, one primary regulator of the banks along with the Office of the Comptroller of the Currency, Yellen sent the message that individuals who tolerate criminality with be held responsible.

The issue for Wells Fargo might be how long it takes for them to get out of the penalty box, Moody’s noted:

The unprecedented constraint on Wells Fargo’s asset growth will be lifted only when the Fed is satisfied with enhancements to governance, compliance and risk management, and a third party has completed a review, which is likely to take until the end of 2018.

It might be difficult for analysts to model exactly how long before the Fed is satisfied, but there are silver linings:

Capital ratios should improve as asset size remains capped at 2017 levels, while the bank builds capital through retained earnings. We expect profitability to be satisfactory, assisted by a lower tax rate and prospects of higher interest rates. The recent enhancement of the risk function should protect its asset quality. Management has taken steps to reduce risk, such as shrinking the auto loan portfolio by 13% in 2017, amid weakness in that sector. A flat balance sheet and regulatory liquidity requirements also help defend Wells Fargo’s strong liquidity.

The bank has taken actions to address its sales practices, Moody’s notes. But they need to get their act together. “The Fed’s strong remediation actions leave little doubt that further improvement is required, a point that its competitors will highlight in their attempts to take away market share from Wells Fargo,” the report observed.

It will be interesting to hear what Charlie Munger says about Wells Fargo when he hosts the Daily Journal meeting next week (stay tuned)!