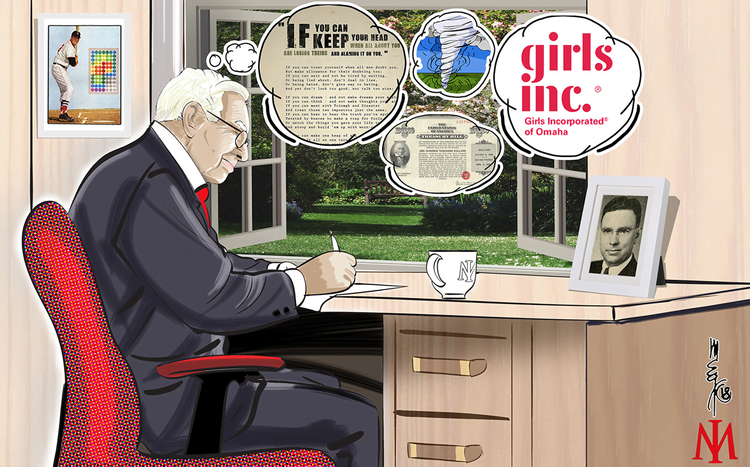 Warren Buffett’s annual Berkshire Hathaway letter was released after the market closed on Friday. Like a lot of things Buffett, this is unconventional. Buffett wants to ensure analysts and his investors, or ‘partners’ as he considers them, have ample time to study the letter before trading re-commences Monday.

Buffett's genius is not only his stock picking ability, business acumen and all-round investing prowess, but his communication skills. In his annual letters, Buffett talks to the average layperson, often conveying complex issues with both clarity and humour.

"Do not try to impress by big words. Impress by the clarity of your ideas." Lee Kuan Yew

"The definition of genius is taking the complex and making it simple." Albert Einstein

A year or so ago I took the time to read all of the Berkshire Letters, beginning to end. I found so many nuggets of wisdom - which formed part of a series of posts I wrote titled 'The Buffett Series' .

It continues to amaze me that so few business schools spend the time to study the lessons of arguably the world's greatest investor. These lessons are a gift to investors.

"I think almost anybody can draw [on the] lessons from Warren’s achievement at Berkshire. The interesting thing is you could go to the top business schools and none are studying and teaching what Warren has done." Charlie Munger

Once again Buffett this year lays out in simple terms how Berkshire performed over the past year, provides some insights into the environment, and enlightens us with some investment guidance.

Buffett notes prices of Stand-Alone Business are at an all-time high ....

"In our search for new stand-alone businesses, the key qualities we seek are durable competitive strengths; able and high-grade management; good returns on the net tangible assets required to operate the business; opportunities for internal growth at attractive returns; and, finally, a sensible purchase price.

That last requirement proved a barrier to virtually all deals we reviewed in 2017, as prices for decent, but far from spectacular, businesses hit an all-time high. Indeed, price seemed almost irrelevant to an army of optimistic purchasers."

"The ample availability of extraordinarily cheap debt in 2017 further fuelled purchase activity [by competitors]. After all, even a high-priced deal will usually boost per-share earnings if it is debt-financed."

"If the historical performance of the target falls short of validating its acquisition, large “synergies” will be forecast. Spreadsheets never disappoint."

"We also never factor in, nor do we often find, synergies."

"Unlike bank deposits or life insurance policies containing surrender options, p/c float can’t be withdrawn. This means that p/c companies can’t experience massive “runs” in times of widespread financial stress, a characteristic of prime importance to Berkshire that we factor into our investment decisions."

"The downside of float is that it comes with risk, sometimes oceans of risk. What looks predictable in insurance can be anything but. Take the famous Lloyds insurance market, which produced decent results for three centuries. In the 1980’s, though, huge latent problems from a few long-tail lines of insurance surfaced at Lloyds and, for a time, threatened to destroy its storied operation. (It has, I should add, fully recovered.)"

"My guess at this time is that the insured losses arising from the hurricanes are $100 billion or so. That figure, however, could be far off the mark. The pattern with most mega-catastrophes has been that initial loss estimates ran low. As well-known analyst V.J. Dowling has pointed out, the loss reserves of an insurer are similar to a self-graded exam. Ignorance, wishful thinking or, occasionally, downright fraud can deliver inaccurate figures about an insurer’s financial condition for a very long time."

Buffett is holding a lot of Cash ...

"At year end Berkshire held $116.0 billion in cash and U.S. Treasury Bills (whose average maturity was 88 days), up from $86.4 billion at yearend 2016. This extraordinary liquidity earns only a pittance and is far beyond the level Charlie and I wish Berkshire to have. Our smiles will broaden when we have redeployed Berkshire’s excess funds into more productive assets."

"Charlie and I view the marketable common stocks that Berkshire owns as interests in businesses, not as ticker symbols to be bought or sold based on their “chart” patterns, the “target” prices of analysts or the opinions of media pundits. Instead, we simply believe that if the businesses of the investees are successful (as we believe most will be) our investments will be successful as well. Sometimes the payoffs to us will be modest; occasionally the cash register will ring loudly. And sometimes I will make expensive mistakes. Overall – and over time – we should get decent results. In America, equity investors have the wind at their back."

"Stocks surge and swoon, seemingly untethered to any year-to-year buildup in their underlying value. Over time, however, Ben Graham’s oft-quoted maxim proves true: “In the short run, the market is a voting machine; in the long run, however, it becomes a weighing machine.”

Stocks can be Volatile, so avoid Debt ...

"Berkshire, itself, provides some vivid examples of how price randomness in the short term can obscure long- term growth in value. For the last 53 years, the company has built value by reinvesting its earnings and letting compound interest work its magic. Year by year, we have moved forward. Yet Berkshire shares have suffered four truly major dips. Here are the gory details:

This table offers the strongest argument I can muster against ever using borrowed money to own stocks. There is simply no telling how far stocks can fall in a short period. Even if your borrowings are small and your positions aren’t immediately threatened by the plunging market, your mind may well become rattled by scary headlines and breathless commentary. And an unsettled mind will not make good decisions."

In the next 53 years our shares (and others) will experience declines resembling those in the table. No one can tell you when these will happen. The light can at any time go from green to red without pausing at yellow.

When major declines occur, however, they offer extraordinary opportunities to those who are not handicapped by debt. That’s the time to heed these lines from Kipling’s If:

“If you can keep your head when all about you are losing theirs . . . If you can wait and not be tired by waiting . . .
If you can think – and not make thoughts your aim . . .
If you can trust yourself when all men doubt you . . .
Yours is the Earth and everything that’s in it.”

Buffett tallies his bet against Hedge Funds versus the S&P500 with Protégé Partners..

"The bet illuminated another important investment lesson: Though markets are generally rational, they occasionally do crazy things. Seizing the opportunities then offered does not require great intelligence, a degree in economics or a familiarity with Wall Street jargon such as alpha and beta. What investors then need instead is an ability to both disregard mob fears or enthusiasms and to focus on a few simple fundamentals. A willingness to look unimaginative for a sustained period – or even to look foolish – is also essential."

Buffett and the counter-party to his bet, Protege, funded their portion of the prize by purchasing zero-coupon bonds..

"Protégé and I originally intended to do no more than tally the annual returns and distribute $1 million to the winning charity when the bonds matured late in 2017.

After our purchase, however, some very strange things took place in the bond market. By November 2012, our bonds – now with about five years to go before they matured – were selling for 95.7% of their face value. At that price, their annual yield to maturity was less than 1%. Or, to be precise, .88%.

Given that pathetic return, our bonds had become a dumb – a really dumb – investment compared to American equities. Over time, the S&P 500 – which mirrors a huge cross-section of American business, appropriately weighted by market value – has earned far more than 10% annually on shareholders’ equity (net worth)."

"The result: Girls Inc. of Omaha found itself receiving $2,222,279 last month rather than the $1 million it had originally hoped for."

Buffett expands on Bonds as an investment ..

"I want to quickly acknowledge that in any upcoming day, week or even year, stocks will be riskier – far riskier – than short-term U.S. bonds. As an investor’s investment horizon lengthens, however, a diversified portfolio of U.S. equities becomes progressively less risky than bonds, assuming that the stocks are purchased at a sensible multiple of earnings relative to then-prevailing interest rates.

It is a terrible mistake for investors with long-term horizons – among them, pension funds, college endowments and savings-minded individuals – to measure their investment “risk” by their portfolio’s ratio of bonds to stocks. Often, high-grade bonds in an investment portfolio increase its risk."

And finally keep it simple ...

"A final lesson from our bet: Stick with big, “easy” decisions and eschew activity. During the ten-year bet, the 200-plus hedge-fund managers that were involved almost certainly made tens of thousands of buy and sell decisions. Most of those managers undoubtedly thought hard about their decisions, each of which they believed would prove advantageous. In the process of investing, they studied 10-Ks, interviewed managements, read trade journals and conferred with Wall Street analysts."

Buffett concludes ... "Come to Omaha – the cradle of capitalism – on May 5th and meet the Berkshire Bunch. All of us look forward to your visit."..  I also hope to see you there!