ValueWalk
Home Business Wal-Mart Is Not The Perfect Stock. So What? 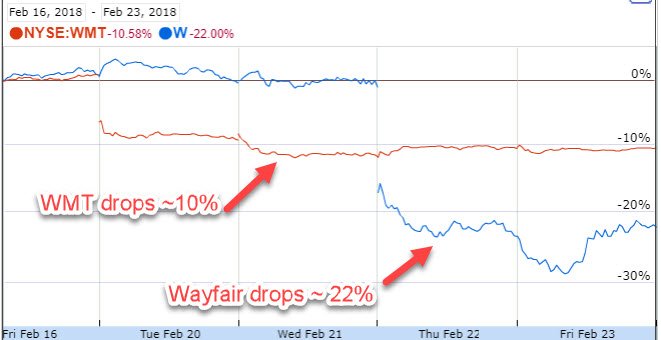 Can you believe it?

Walmart (WMT) is becoming a battle stock. Gone are the days where Walmart was all about the dividend and same store sales.

This has introduced an interesting dilemma. There is now a fundamental shift from thinking of Walmart as the gold standard of long term holds, to short term knee jerks.

Amazon.com (AMZN) is the clear leader and their advantage continues to grow.

Q4 market share numbers are not available yet, but even when you look at Q3 market share, Amazon is destroying the competition.

Now combine this Q3 chart to the type of traffic and sales expected as Q4 rolls around. Think Thanksgiving, Christmas, end of year sales and promotions. The estimated number for Amazon’s total 2017 market share is at 44%.

But why am I talking about Amazon?

The point is to show that the Amazon wall is supremely high and difficult to penetrate. Amazon’s flywheel is in full motion and is spinning at breakneck speeds. Walmart is still trying to warm it’s engine. 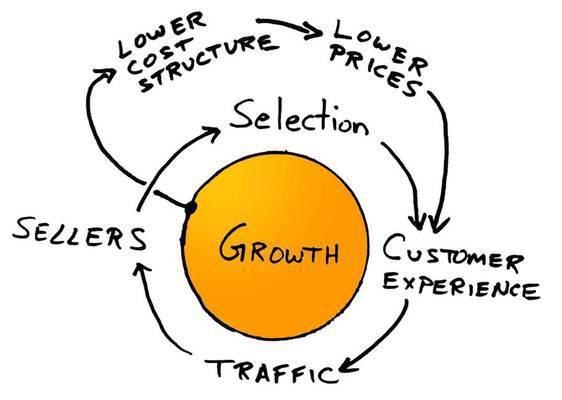 Amazon Flywheel | Source: The Everything Store

Putting things into perspective and context is important.

Walmart is a small fry compared to Amazon’s online reach and competitive advantage. Walmart is a chimpanzee trying to overthrow King Kong at the moment. There’s a lot of training that this little monkey needs to work on before it makes up more ground. But the argument is the same vice versa.

However, on the online front, here’s a small list of Walmart disadvantages causing people to shop on Amazon.

Let’s get things straight. Walmart is far behind Amazon in the ecommerce space and the expectation bar is set high with previous quarterly growth numbers of 50%+.

Based on various commentary I’ve read so far, the consensus concern is that online growth of 23% is too low. On the call, management stated that it is expected to pick up again, but with Q4 being the biggest sales period, it was disappointing to many holders.

Walmart dropped 10% and although it’s not the cheapest company to own (I’ll get to valuation later), a price drop of 10% is good news to my ears.

Compare the news to Wayfair (W) and how the stock price reacted.

If you believe markets are 100% efficient, 10% drops signals a mild disappoint and not something to lose sleep over.

Of the 41 contrarian rules that David Dreman wrote about, number 11 sums up the reaction to Walmart.

Rule 11: Positive and negative surprises affect “best” and “worst” stocks in a di­ametrically opposite manner.

You see the difference in the “surprise” magnitude between Walmart and Wayfair. Goes to show that there are many strong holders in Walmart and that the market does not believe it is priced to perfection.

How Much Growth is the Market Expecting?

One of my favorite things to do is to simply look up what growth the market is expecting from the company. A simple play from Buffett’s playbook.

I only get into situations where I know the value. There are thousands of companies whose value I don’t know. But I know the ones I know. And incidentally you don’t pinpoint things. If someone walks in this door and they weigh between 300 and 350 pounds, I don’t need to say they weigh 327 to say that they’re fat. – Warren Buffett

If you are trying to pinpoint valuation, you are either:

Other than these two ends of the spectrum, the rest of the people in the middle understand that valuation is a range. By knowing the approximate market expectation, you can make an easy decision as to where a stock lies in the undervalued, fairly valued or expensive universe.

The important question to ask is whether you think Walmart can grow FCF at 6.4%.

Same question: do you think Walmart can grow FCF at 6.4%?

My answer is yes.

Not over the next few months or next year, but over multiple periods – yes.

Using the same FCF concept, and applying it to a multistage DCF where growth is reduced by 10% every few years, I get a quick ballpark value range that looks like this. 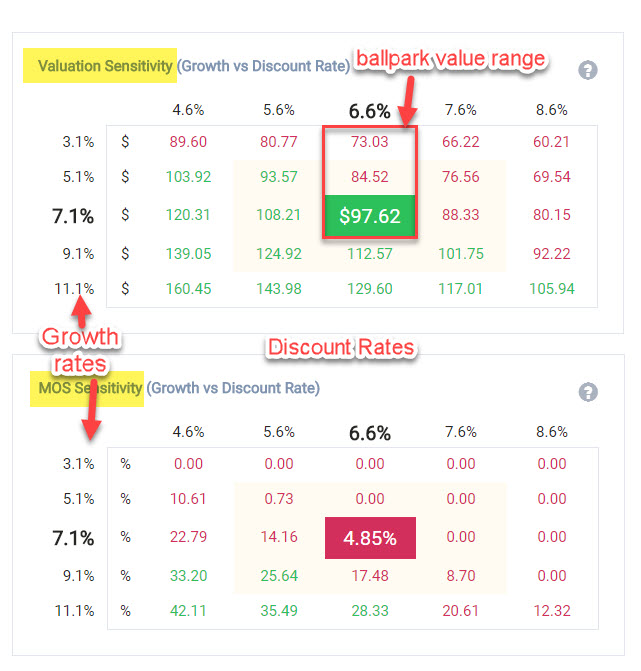 I used the same inputs where: 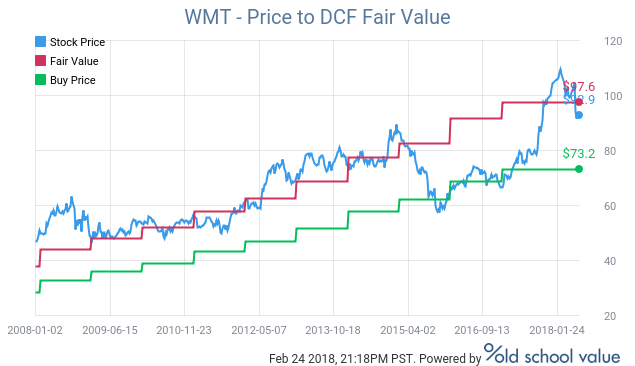 Current price of $93 is fairly valued at this time. This valuation also implies that Walmart isn’t priced to perfection. Hence the 10% drop compared to much sharper declines for the darling stocks that disappoint.

Walmart is much easier to value than most companies because of their consistency. If I value Walmart from different angles, I still get results within my range. It’s important that you don’t play with the numbers to match your assumptions.

An earnings based approach using $4.75 for 2019 guided EPS (lower end of the guidance), the Graham’s Formula gives a valuation of around $80. 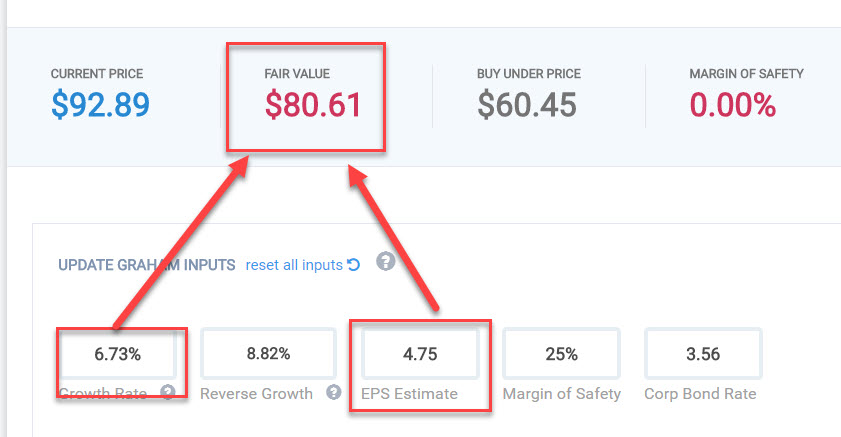 Rather than using PE, I prefer EV/EBIT multiples. It’s not necessary to use this method for Walmart, but since their margins are going down as a by-product of investing in ecommerce, you can see how it matches up.

An EV/EBIT of 11.2x is a fair multiple as the normalized figure which brings the fair value to $78. The aggressive multiple of 14.42x gives an upper fair value of $105.

Walmart is a strong hold in my portfolio and I am not worried about what it will do this quarter or next.

Once you get beyond the headlines that focus on click bait, short term price movements and quarterly hurdles, you’ll see things from a different angle as you dig into the numbers and put things into perspective.

Walmart is not perfect. So what?