ValueWalk
Home Info-Graphs UK Is Third Most Cashless Country – What Does The Future Hold? 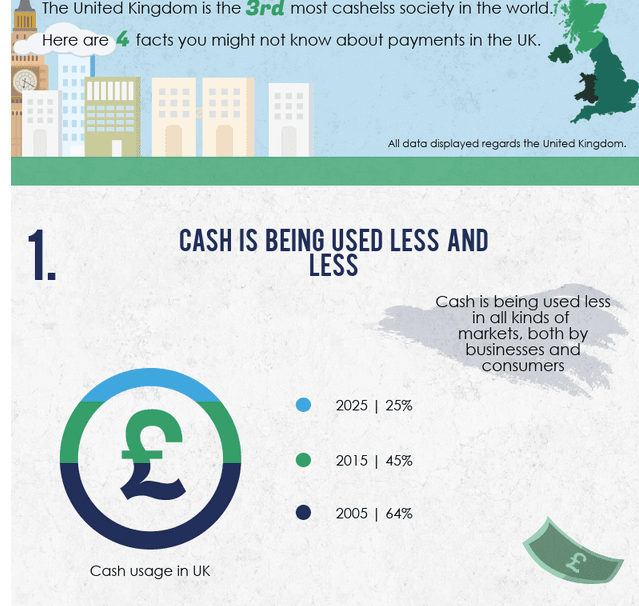 Are we a cashless society?

In the last years alone we have made astonishing progress towards cashless, and some may say that some countries have already stopped using cash.

The United Kingdom, for example, is considered one of the most cashless places in the world, generally ranked in 3rd position after Canada and Sweden. Although it is very complex to asses with accuracy how ‘cashless’ a country really is, it’s evident that for the UK, cash is a relic of the past. But is it really?

According to the research below by Market Inspector, cash usage has been reduced by everyone - both businesses and consumers use credit and debit cards on a daily basis, so much that already in 2016 there were almost 3 times as many cards than people in the whole UK.

Online payments have also seen great exponential growth everywhere in Europe. Mobile payments instead are still relatively new but are definitely on the way to becoming the standard way of payments in stores like supermarkets.

Even with all the latest advancements such as contactless and mobile payments going mainstream, the UK still spends an average of £80 million a year to produce and distribute banknotes.

Out of the 3.5 billion notes in circulation last year, almost 900 million were damaged or destroyed. Moreover, forging fake cash is still a very real and current problem: in the first half of 2017 alone, several hundred thousands of notes were forged, with billions of pounds of value. Robberies still occur all over the country on a daily basis and every robbery is a loss of thousands of pounds to the victim.

One of the most tangible advantages that could be brought by a cashless society is simple, yet it would change our day to day life: wallets. We all dream of the day when all of our documents and money will be stored on our phones, safely protected behind fingerprints and face recognition systems - additional protections that cash and contactless cards don’t have. Losing a wallet can be tragic for many people and, in the last 5 years, still 1 out of every 10 people have lost their wallet.

It goes without saying that a cashless society can also have some downsides: some argue that it would affect the poorer slices of population in a negative way; that digitalising our documents and payments would imply a breach of our privacy; but since it means more safety, less uncontrolled cash used for illegal purchases, less tax evasion, and finally a more comfortable life, why should we slow down or stop our rise to a cashless society?

Are you ready for it or do you still hold cash close to your heart?

If cashless is a reality, how far is it?

Learn about cash problems, how relevant different ways of paying are and where the UK stands on the road to a cashless society in this recent infographic by Market Inspector:

(Of course, the elimination of money could bring many bad issues, which is not addressed in this article)