ValueWalk
Home Economics What Would A Transfer Of Economic Power From Baby Boomers To Generation...

According to estimates from the U.S. Census Bureau, Generation X (Americans born between 1965 and 1981) numbered around 66 million in 2015, putting them behind both the baby boomers (born between 1946 and 1964) with 75.4 million and millennials (born between 1982 and 2000) with 83.1 million in size. While the date parameters are clear for the baby boomer generation, the range is subject to debate for Generation X and millennials, so for the purposes of this analysis, we are using U.S. Census Bureau definitions. 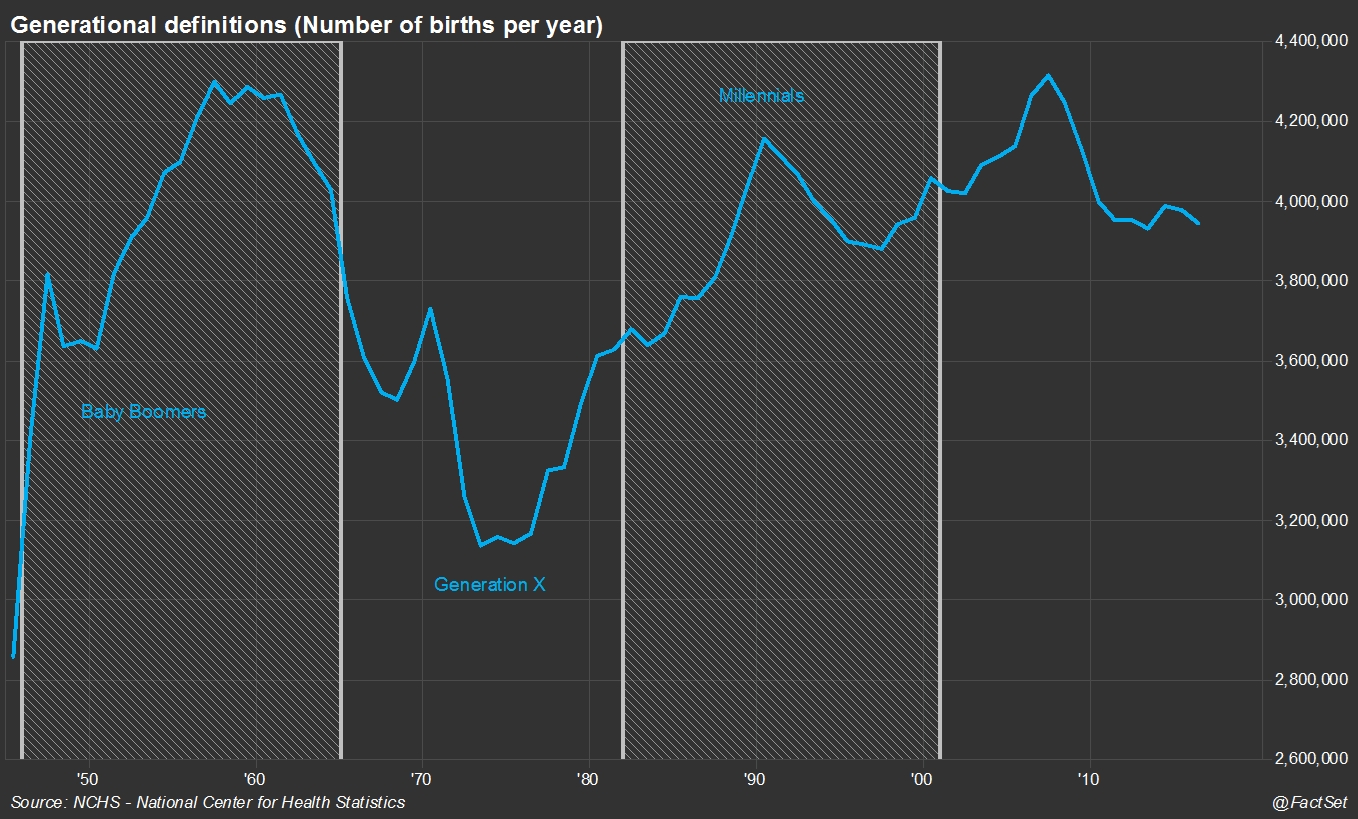 During the post-war baby boom years, annual births in the United States averaged just below four million; from 1954-1964 the birth rate never fell below four million. That changed dramatically in the mid-1960s. Between 1965 and 1981, annual births averaged 3.4 million, and no year saw births above the four million threshold level. Because of this sharp decline in birth rates, this period is often referred to as the baby bust. Nearly 76 million children were born in the U.S. between 1946 and 1964, compared to 58.5 million during the baby bust (the current population in Generation X is larger than this due to immigration).

Given the size of the age cohort, baby boomers have dominated American culture for decades, and today they hold a larger percentage of corporate and governmental leadership positions than any other generation. What would a transition of power to Generation X look like?

Corporate and Government Power: The Next Generation

As discussed previously, roughly 10,000 baby boomers hit retirement age (65) every day, but many are working past this age milestone. Even though some may opt for a phase II career, working fewer hours for less money, many hold prominent positions and want to stay on that path well past the traditional retirement age. Roughly 80% of S&P 500 companies have baby boomer CEOs and approximately one-third of that group is 65 or older.

In addition to their dominance in the boardroom, baby boomers also lead in the halls of government. Eighty percent of the U.S. House of Representatives and 86% of the Senate are aged 50 or older (this also includes the approximately 15-20% who are older than the baby boomers). In the White House, baby boomers have served as president since 1993, when Bill Clinton took office.

On the other hand, Generation X holds fewer than 10% of CEO positions at S&P 500 companies and still represents a minority in the U.S. Congress. However, this generation’s influence is growing. The Speaker of the U.S. House of Representatives, Paul Ryan (born in 1970), is a member of Generation X. The top 10 on the Forbes 400 list of the wealthiest Americans includes two Gen Xers (Larry Page and Sergey Brin of Google) in addition to two baby boomers (Bill Gates of Microsoft and Jeff Bezos of Amazon) and one millennial (Mark Zuckerberg of Facebook).

As more and more baby boomers leave the workforce over the next decade or two, the impact of Generation X will continue to expand. With the oldest members of this age group now in their early 50s, they are just now reaching the peak of their careers. They are certainly in the peak earnings stage of their lives. According to the Consumer Expenditure Survey published by the U.S. Bureau of Labor Statistics, in 2016, Americans in the 35 to 44 and 45 to 54 age groups had the highest average after tax income of all age groups; these two groups essentially represent Generation X.

Generation X isn’t big enough to fully step into the shoes of baby boomers—but it’s not clear that they want to. Gen Xers were often referred to as “slackers” in their youth, but these former “latchkey kids” have a strong independent streak and have always looked to forge their own path. This is especially true for female Gen Xers, who were strongly influenced by baby boomer women, particularly the ones born in the second half of the baby boom who entered the job market in droves.

The labor force participation rate for females surged in the late 1970s, just as women from the younger cohort of baby boomers joined the labor market. Between 1975 and 1980, the female participation rate surged by 5.2 percentage points while the number of women in the labor force jumped by 21.4%; this was the fastest growth in these indicators for any five-year period in the post-war era. The female participation rate and the labor force continued to increase through the 1980s and 1990s, albeit at a slower pace. Fast forward to today, when all of the female CEO’s of S&P 500 companies are baby boomers, with half of them at or above retirement age. As these powerful women retire over the next five to 10 (or 20) years, they have opened the doors for Gen X and millennial women to take their places. Their legacy is the key role that women play in today’s labor force.

Generation X may not have the numbers to match the dominance of the baby boomers, but their growing influence shouldn’t be underestimated. As the baby boomers leave the workforce over the next decade or two, they may have paved the way for the next generation, but don’t expect Generation X to follow the same path as their predecessors.