The current market volatility roils our wealth. Whenever this occurs, many believe the market is about to fail causing great permanent losses. That great losses are not suddenly upon us and that the market is not about to ‘irreparably fail’ requires perspective, a long-term perspective. The simple answer is that markets have never failed.

That is a dramatic statement but is supported by thousands of years of recorded history. A history which is dated to the age of the Sumerians 5,000BC from which we have the first known market records. https://en.wikipedia.org/wiki/Sumer. The facts are that markets are innate to being human and have been our means of sharing unique human talents as we have advanced our standard of living for millions of years. We mostly have lost sight of this when we take a short-term focus of investment markets and become overly concerned with tomorrow’s trade. A short-term focus has many believing that investment markets are some mechanical system external to ourselves, like a complex clockwork, which is prone to breakage. The investment markets, while complex with an overwhelming amount of seemingly unconnected detail, are only a more sophisticated means of talent-sharing. In the process each of us seeks to gain an edge of personal success to advance our own standard of society by making risk-based decisions. Market prices are set by our anticipation of future outcomes, i.e. market psychology.  In the process, every market recorded has its periods of shifting too far to one side which requires a period of adjustment back towards the main trend of the period. Markets develop trends as society advances with many little bubbles correcting along the way. Most of these are ‘head-feints’. They come on suddenly without explanation and we fear they will turn into a major loss to our standard of living and a mini-panic occurs. The current volatility is one of these events. How one knows this derives from a long-term perspective. 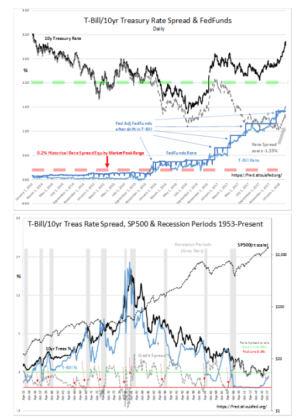 In each chart, the 2% and higher level is noted by the Dashed Green Line while the 0.2% level and lower is noted by the Dashed Red Line. Economic cycles are driven by the willingness of lenders to lend. The T-Bill/10yr Treasury rate spread is a good proxy to measure the propensity to lend and in the process becomes a leading indicator for economic activity. The trend in economic activity is what drives the financial news which in turn is what drives market psychology and market prices.