Financial markets are off to a good start today trying to stabilize after the worst week in two years for American equities. The tumultuous move in equities last week wiped $2 trillion from US. Tesla Motors Inc (NASDAQ:TSLA) stock performance also took a beating at its worst week since July. The stock is trading around $316 at this writing, up 15% in the past 12 months. That compares with gains of 13% for the S&P 500 SPX, 20% for the Dow Jones Industrial Average (DJIA).

Tesla, EV and the Auto Industry

According to the latest sales data, the US auto industry has cooled off considerably with Americans keeping vehicles longer or purchasing lower-mileage used cars instead of new ones. Auto dealers have reduced prices and have extended loans to 72 months or more to move sales, but there is still an oversupply of new cars in the market. Crossovers, sport-utility vehicles and pickup trucks are the most popular making new car sales in the US.

For Tesla, Model X is supposed to be its answer to the SUV popularity in the US. However, even Musk said Model X is too complicated to configure and produce. So this means Tesla is missing out on roaring SUV boom. Adding insult to injury, Consumer Reports magazine rates the Model X second to last in its ranking of 15 luxury midsize SUVs.

For vehicle purchase, the deciding factor is still price (total cost of ownership, including resale value). Electric car prices are falling, but they still cost more than the gas counterparts due to their expensive batteries. With regular gas prices averaging $2.58 per gallon, it’s hard to justify the price premium of an electric vehicle (EV).

Regarding resale value, according to Edmonds.com, electric cars haven’t yet proven their durability, and buyers of used electrics are worried about battery costs. This could be another reason to deter consumers taking the plunge into an EV instead of a traditional gas car.

Many have debated when EV will take over the world. Well, here and now, at least not today nor in the near term. With this macro back drop, how did Tesla as a company perform so far?

A Promise of “Positive Operating Income” 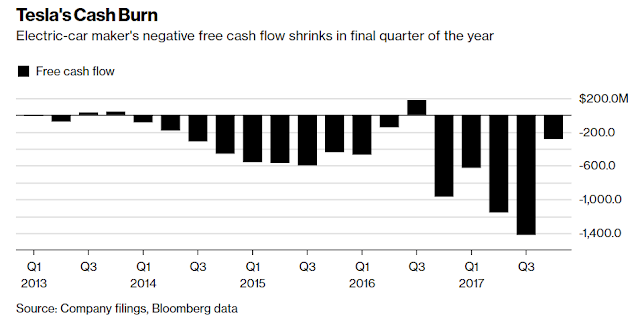 To soften the blow, Tesla said it’s on track to produce 5,000 Model 3s per week by the end of its second quarter, and 2,500 a week by the end of first quarter 2018. The Model 3, with a starting price at $35,000, is Tesla’s first vehicle targeted at the mass consumer market. According to CEO Elon Musk, once that Model 3 production target is met, Tesla could begin to generate sustained positive operating income in 2018. That “promise” partly pushed the stock up 3% on the day. 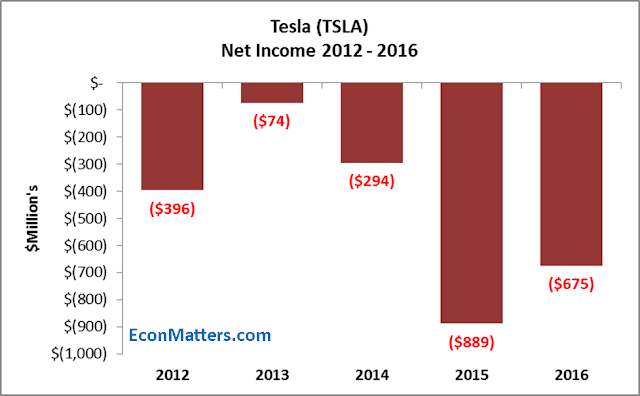 You might wonder what the big deal is about “positive operating income”? Every company is in the business to make positive income, right? Well, In Tesla’s case, the company has never made any money, that is, the company has been burning cash fast and furious since day 1, and yet investors seem to think the lofty $300+ price per share is a bargain. So a promise by the CEO to have “positive operating income” in 2018 probably brought tears to the eyes of many shareholders.

Model 3 production is an important cash factor to Tesla as the ramp-up could mean more money coming in from customers taking delivery thus alleviating concerns about whether the company had enough cash.

That production target for Model 3 has been delayed by Musk several times already. Apparently, Similar to Model X, Tesla has run into supply chain problem with Model 3 as well, which Musk has described as “production hell.” Then last Friday, just two days after the earning release, Tesla filed with federal regulators to “clarify” CEO Musk comment regarding the Model 3 production schedule.

I’m not going to mince and interpret the words by Musk and Tesla, but I am inclined to share the lingering concerns by many analysts about the Model 3 production ramp and the company’s cash position.

Furthermore, pay attention to the devil in the detail of Tesla’s earning call.

The company indicated its capital spending will rise “slightly” from the 2017 level. With $10.4 billion in long-term debt and capital leases (by the way, with negative earnings, Tesla does not even have a PE ratio), it is more than likely that Tesla will rip through its cash and raise capital again later in 2018.

Without this frenzy from central banks QEs, Tesla would have encountered serious financial problems long ago. Yet a charismatic CEO and a sexy vision (and promise) of a cleaner better world have kept investors cash coming.

The highest price target among the Wall Street analysts who cover Tesla is $500 per share. Ideology aside, investors really need to think long and hard before paying $320 a share for a company that can’t effectively resolve its operational issues and has never made a profit.