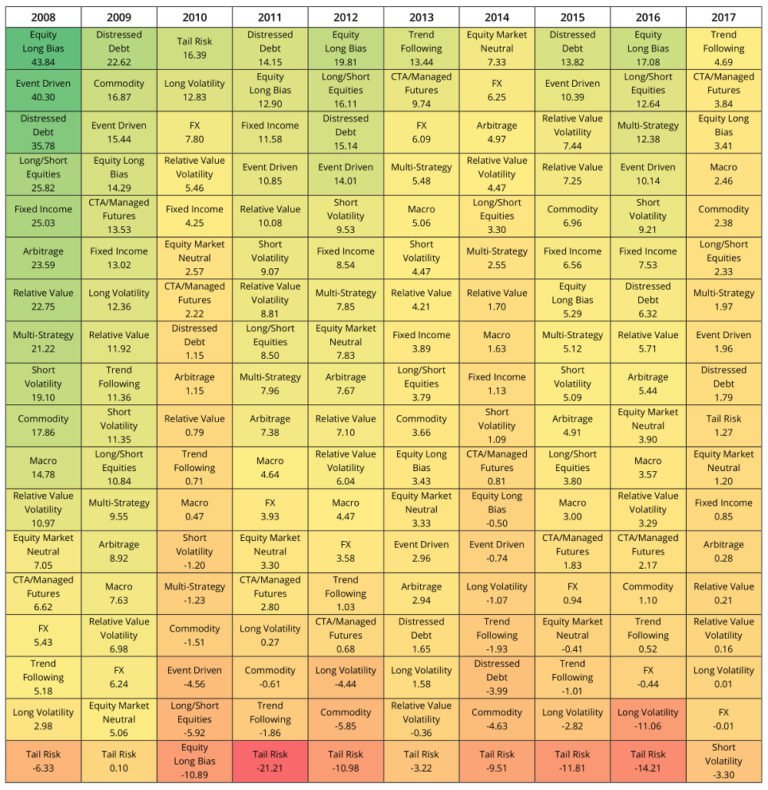 Hedge funds were off to a good start in the first month of 2018, with the Eurekahedge Hedge Fund Index up 2.26%1 in January. Meanwhile, underlying markets as represented by the MSCI AC World Index (Local) gained 3.78% over the same period. As the global risk on mode continued into January, trend following managers were positioned in good stead with holdings into equities and oil among performance contributors. Equity markets strengthened following the passing of tax reform in December, resulting in an increase of investments which drove US equities to all-time highs. Over in Europe, the growth momentum appears to be going strong with a strengthening Euro adding to gains for foreign investors in the region. Yield on sovereign bonds, particularly the Gilt and German bund, ended higher in January backed by positive signs of German coalition talks. Emerging markets led by Russia, China and Brazil have also contributed to strong gains for hedge fund managers as global risk appetite remains strong, with a weakening USD favouring exposure to EM markets where valuations remain relatively cheap. Among regional mandates, Latin American hedge fund managers topped the tables, gaining 4.47% while CTA/managed futures managers posted the best returns, up 3.84% among strategic mandates.

While the full figures for February 2018 returns will start rolling in towards month-end, the spike in volatility in recent days has brought an end to the Trump rally. Short-volatility hedge fund strategies will likely see substantial losses in February, while tail-risk and long volatility strategies will finally see some redemption following double-digit losses during the exceptionally calm markets of 2017. If however this volatility spike is short-lived and the VIX trends lower towards the month end then long volatility managers will see their winnings get trimmed. Watch out for the returns across volatility strategies @CBOE Eurekahedge Volatility Hedge Funds.

Below are the key highlights for the month of January 2018:

All regional mandates started the year on a positive note, with both Eastern Europe & Russia and Latin American managers topping the table – up 6.54% and 4.47% respectively. The uptrend in oil prices which reached US$70 a barrel combined with a weak US dollar supported performance of managers overseeing emerging mandates. Latin American equity markets had a good month with the Brazilian IBOVESPA up 11.14% during the month, largely on the prospects of a regime change in Brazil. Signs of progress around NAFTA renegotiations, benefited Mexico’s equities with the Mexico IPC gaining 2.23% during the month. Emerging markets and Asia ex-Japan mandated hedge funds were also in positive territory this month, gaining 3.93% and 3.58% respectively with underlying Greater China focused hedge funds posting an impressive performance – gains of 8.56% during the month as markets reacted positively to China’s economy growth which exceed expectations. North American hedge fund managers gained 1.83% buoyed by well-performing equity markets which continue to trade higher on the back of impressive corporate earnings boosted by changes in tax system in the US. Global equities performed well in general with US equities leading much of the strength. European hedge fund managers also ended the month on a strong note with gains of 1.83%. Japanese managers were up 1.28% following a late month sell-off in the Japanese equity markets following concerns over a strengthening Yen. The Nikkei 225 Index ended the month with gains of 1.46%.

Over the past year, Asia ex-Japan managers topped the tables, gaining an impressive 20.87%. Emerging markets mandated hedge funds gained 17.21%, with strength led by underlying Eastern Europe and Russia mandated funds. Latin American and Japan hedge fund managers ended 2017 up 14.17% and 13.12% respectively whereas regional peers in North America and Europe eked to post double digit gains, returning 8.05% and 7.06% respectively over the past year.

All strategic mandates were in positive territory during the month. CTA/managed futures managers posted the strongest return out of all strategic mandates at 3.84% in January, attributing gains to long oil positions, the weakening US dollar and rising equity market indices. Long exposure to precious metals was also among performance contributors for CTA/managed futures funds as the weakening in the US dollar led precious metals to trade higher during the course of the month. On the contrary, managers posted losses on long exposure into industrial metals, particularly in copper as concerns lingered over slowed demand from China. Among underlying sub-strategies within the CTA/managed futures mandate, trend following hedge fund managers were the star performers, up 4.69% Currency-themed positions were a major performance detractor for FX strategies, as the greenback correction led to losses on long USD positions. Managers reported losses on US positions against developed market currencies, while short USD position against GBP was the biggest performance contributor to most managers. Macro and long/short equities funds also performed well, up 2.46% and 2.33% respectively. Despite some of the high profile losses on the currencies, particularly on short YEN/USD and EUR/USD bet, macro managers on the whole had positioned themselves well in anticipation of central bank actions. Underlying equity long-bias managers posted the best gains among sub-strategies within the long/short equity mandate, gaining 3.41% while equity market neutral managers posted gains of 1.20%. The NASDAQ and DJIA gained 7.36% and 5.79% respectively while in the EU, the CAC and the DAX gained 3.19% and 2.17% respectively. In the UK, sterling strengthened against euro and dollar since the EU referendum and with anticipation that BOE would make another increase of base rates faster than expected, leading to a 2.01% loss in the FTSE. Asian equity markets were also in a bright spot, partly driven by strong profits from Chinese equities supported by positive earnings – HS China Enterprise and Hang Seng Indices gained 15.82% and 9.92% during the month.

Multi-strategy and event driven managers gained 1.97% and 1.96% respectively, while event driven managers with exposure into Asia posted gains during the month as deal activity within the financials and energy space contributed to growth. Distressed debt hedge funds started the year on a positive note gaining 1.79%, following improving valuation of underlying corporate assets, though it still remains to be seen if distressed debt managers can ‘hold the fort’ amidst economic uncertainties this year though rising oil prices have provided support for that in recent years for debt exposure in the energy sector. A production cut agreement between major oil producers, alongside a strong market demand and gradual oil inventory continue to provide further support to oil prices and in turn high yield markets.

Fixed income mandated hedge funds posted modest gains of 0.85% during the month, with gains realised from long exposure into Germany and UK fixed income instruments trading higher during the month, posting an impressive 63.23% and 26.89% respectively. Growing political stability in the European region and healthy economic growth, coupled with positive signs of coalition talks in Germany, drove bond yields higher during the month. Arbitrage and relative value mandated hedge funds follow next with modest gains of 0.28% and 0.21% respectively over the same period. January saw a return of volatility in the market, with the CBOE VIX Index rising to 22.64. The CBOE Eurekahedge Short Volatility Hedge Fund Index posted losses of 3.30% during the month.