As one of the worst market carnages in history unfolds, and the long-awaited short volatility trade collapses, the markets mean reverted early Tuesday morning and engaged in wild but balancing behavior. That mean reversion can be seen in the unwinding of the notorious Credit Suisse “XIV” short volatility exchange traded note. But just how jarring has the market volatility really been? A Barclays report says the market crash volatility does not accurately reflect fear and was more technical in nature, while Goldman Sachs agrees with the technical causation. 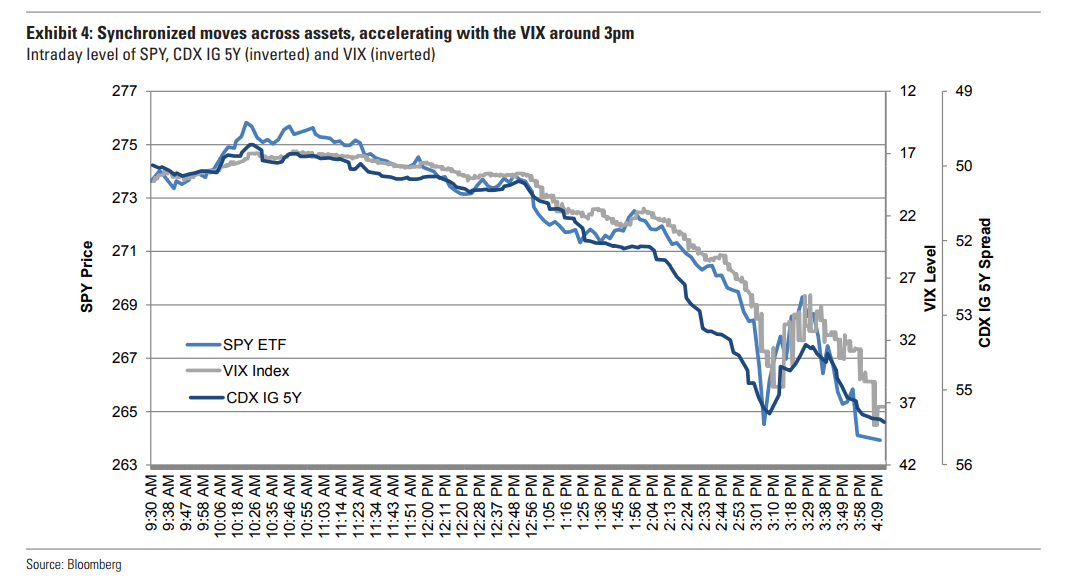 The fear-gauge acted on “technical” trading that moved the market, not fundamentals

Credit Suisse joins a growing number of short volatility exchange traded funds on the verge of going bust, particularly those leveraged funds. The result of this carnage could be the answering of an interesting question: with a limited liability exchange traded contract structure, who pays the margin call when they go negative. Investors have a limited liability structure that ensures they will lose no more than was invested. But in listed derivatives, an investment can go negative and require additional capital through a dreaded “margin call.”

According to Goldman Sach’s Rocky Fishman the volatility sell-off was “technical-led” and is likely to realign the exchange traded volatility landscape.

Barclay’s, likewise, has the same “technical” logic behind the volatility spike. “The significant spike in the VIX index and futures yesterday was technical in nature and does not necessarily indicate a true increase in risk perception,” Barclays head derivatives strategy analyst, Maneesh Deshpande, wrote in a note this morning.

In a February 6 report, Goldman said “there is no question that the move in the VIX was more extreme than other major markets.”

The VIX index uses as a performance driver of price out of the market options, many of which can be thinly traded. Particularly at the close, large market players are said to influence market prices in a sometimes nuanced fashion. Without matching trade data to an individual trader it is difficult to determine who, exactly, is influencing market prices – but making such a determination is done by looking at large trade volumes and ignoring most of the vast majority of smaller trades. 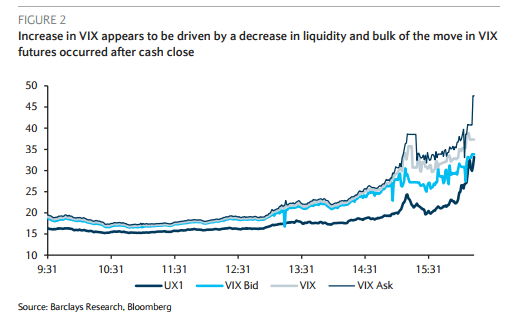 It is unclear the degree to speculative activity near the close, but one item that exasperates such moves are large exchange traded funds opening and closing positions at the end of the day.

“The increase in the VIX index was due to a lack of liquidity and the bulk of the move in VIX futures happened after the close and demand was likely driven by leveraged VIX ETP managers,” Despande wrote alongside Barclays analysts Japinder Chawia and Arnab Sen.

“We see VIX ETP rebalancing as a key component of these flows, as levered and inverse ETP issuers were economically driven to buy more VIX futures prior to the close to avoid unhedged overnight risk (ETN issuers) or excessive tracking error (ETF issuers),” Fishman wrote.

The move in the VIX and as well correlated indexes really jumped near 3 PM Eastern time, but the VIX in particular saw more action.

The event was predicted by bank analysts. Not since JPMorgan’s Marko Kolanovic partially predicted the August 2015 mini flash crash have numerous bank analysts been so accurate in predicting a market crash.

The February price adjustment was also odd in that there was no one major or glaringly obvious catalyst. In 2008, when Lehman Brothers declared bankruptcy due to unregulated OTC SWAPs derivatives, the market panic that major systemically financial institutions were at risk was considered. While the 2018 is a short volatility event much like the OTC SWAPs – the both collect a consistent monthly premium and are exposed to fat tail risk – the most recent event had no clear market villain and occurred just as outgoing Fed Chair Janet Yellen sent a harsh message to banks through Wells Fargo.

SPX put-call skew showed bullish positioning throughout January, but spiked to near an all-time high as of last night’s close. While this level of put-call skew suggests bearish positioning, open interest levels in puts are less extreme and suggest the quantity of hedges in place may not yet be large enough to suggest equity investors are “well hedged”

While exact causation for the 2018 market crash that doesn’t appear to have a major villain won’t likely be known – nor will the individual market trades of large players. But with the VIX landscape changing, Barclays is looking at a new volatility category:

Another source of negative convexity at the current time arises from Volatility Target funds who seek to maintain target portfolio volatility by dynamically rebalancing between equities and cash. We estimate that the current AUM in this type of strategy is ~$350B and they would likely need to decrease their leverage given the increase in expected volatility. Although the precise timing is difficult to ascertain, we estimate that these funds will need to sell ~$225B worth of equities over the next few days. 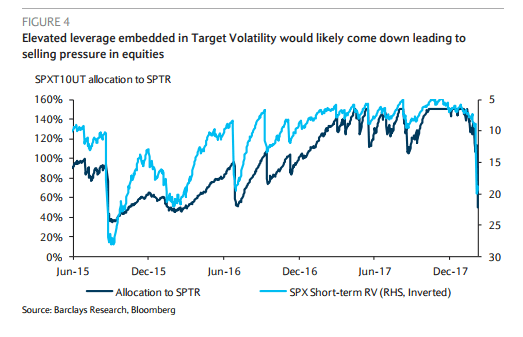