ValueWalk
Home Info-Graphs S&P500 is well above the long-term trend. This is due to low... 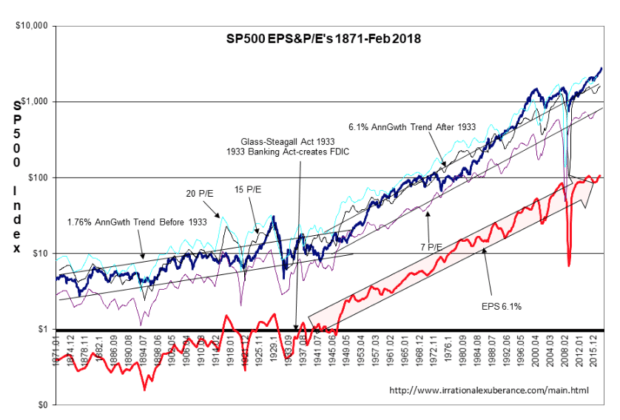 I have used a valuation band for the SP500 on Shiller’s data which trended higher with the trend of EPS, i.e. 6.1% annually since 1933 when FDIC placed bank speculation risk on speculators not on savers. 1933 is the beginning of the rise of Middle Class wealth.

Note that the SP500 is well above the long-term trend. This is due to low inflation, 1.7% which has persisted in a down trend since 1982. Govt spending has been less inflationary once we got past the Great Society impact of the 1970s &  Great Inflation when Volcker raised rates to ~18% in 1982.

Low inflation prices EPS higher and we are seeing the lowest consistent inflation ever recorded.