Thee only has’t to behold at a Shakespeare playeth to realise just how confusing old English can be. The English language, since its ancient inception, has continued to evolve and develop. If we sent a modern person from 2018 back to 1018 AD, or even 518 AD, they’d most likely struggle to work out what people from those times were nattering on about.

Modern people might also struggle to translate their English-speaking friends who work in corporate offices too, where ‘jargon’ has become the modus operandi. Office workers around the world have developed fascinating sociolects, with their own words and phrases.

For example, here’s some typical business phrases from the modern workplace:

Isolated, these terms are almost meaningless to anyone out of the loop (Sorry.), but to individuals who use this language daily will feel at home calling up an ideation session or dropping their thoughts on the bottom line.

What makes jargon so powerful is its capacity to leak into regular language and establish itself as ‘normal’ speech in certain circles. By failing to use a popular word or phrase, a person is consciously objecting to the social norms of their workplace. By using the language of colleagues, a person is, sometimes subconsciously, conforming. When we conform to social norms we feel more included and attached to the people we are in close proximity to. 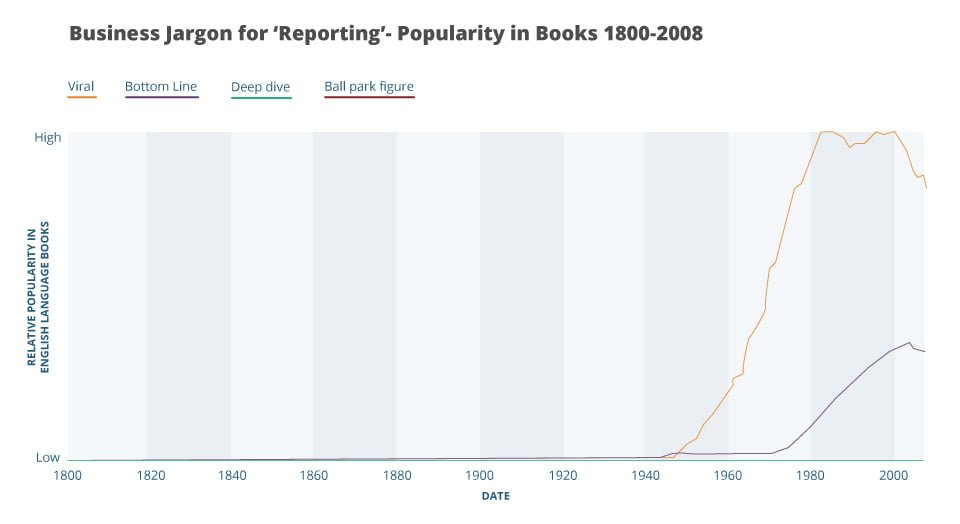 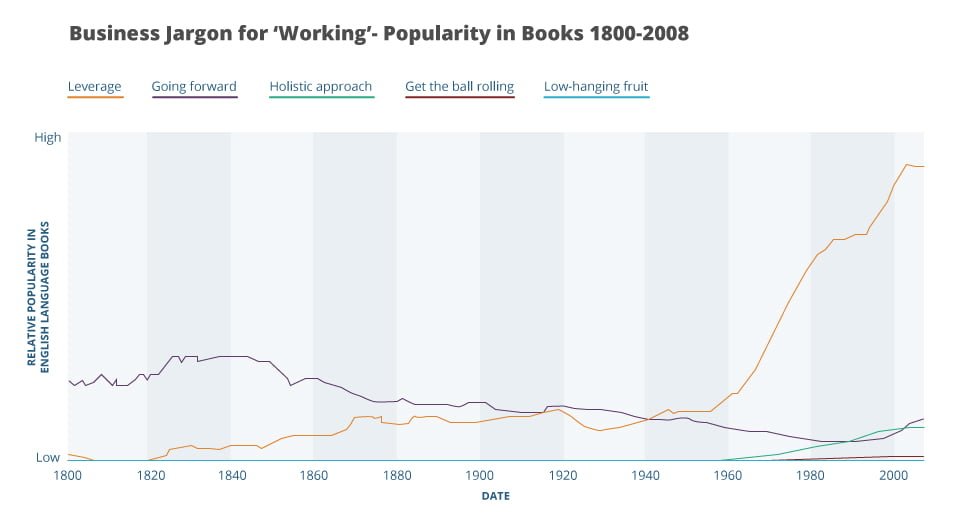 The information that Colonial Life have researched below gives a fascinating window into both the prominence of jargon, and its evolution over time.

Ideation, for example, has recently usurped brainstorm as the most popular term to use when discussing the coming-up-with-ideas-process. However, it also experienced remarkable comparative popularity in the 1890s, a long time before the days of content marketing campaigns. Interestingly, a lot more people are Googling ‘brainstorm’ though, suggesting that the ambiguous word is less clear than ‘ideation’.

When it comes to communication words, synergy is by far the most popular phrase. ‘Ping it’ which becomes part of ‘ping it over’, a phrase used by email users everywhere, is the only term here that comes close to synergy. The phrase ‘ping it’ has become more popular since the Sixties, when office work became more popular in the West, its come a long way from its origins as part of technician speech for radar technology.

For terms relating to actual work, it’s no surprise that ‘leverage’ dominates. The term is only closely rivalled by ‘going forward’ in terms of popularity, another pet peeve across offices everywhere. Interestingly, ‘holistic approach’ has recently become popular. This relative newcomer has become a lot more popular than ‘low hanging fruit’ and others.

The biggest takes from Colonial Life’s research are that:

You can find the full findings here:  https://www.coloniallife.com/employer-resource-center/2018/february/think-outside-the-box