With Congress’ passage of an additional $368 billion in federal spending over the next two years on February 9, our government budget deficits could approach, and perhaps exceed, $1 trillion annually for the next several years. That’s very scary!

Particularly disappointing for conservatives is the fact that numerous Republicans voted for this huge government spending boondoggle. It is now clear that many Republicans have abandoned their commitment to fiscal restraint and limited government. Surprise, surprise.

President Trump’s latest federal budget proposal for fiscal year 2019 asks for record-large spending of $4.4 trillion, well above President Obama’s previous record of $4.2 trillion. The budget deficit under Trump’s fiscal year 2019 plan is estimated to be over $900 billion, and that’s based on some very optimistic economic assumptions – so it could be even higher.

This is a lot of bad news that has only come to light in the last two weeks. Maybe that helps explain in part why the stock markets fell out of bed earlier this month. At the very least, the thought of trillion-dollar deficits over several years (at least) suggests that market volatility is likely to remain elevated indefinitely.

Last Wednesday, President Trump told Republican and Democratic leaders that he could support a 25-cent per gallon increase in the federal gasoline and diesel tax. Apparently, this is true as it was reported later the same day by Bloomberg, CNBC and elsewhere.

This is a bad idea! As I will discuss below, one credible economic forecast estimates that such a rise in the gas/diesel tax, along with higher fuel prices expected this year, would wipe out 60% of the tax cuts that Americans are now experiencing. Let’s hope this is just another controversial idea the president threw out there before thinking it through.

On Monday, February 12, President Donald Trump unveiled the largest federal budget in US history for fiscal year 2019. At a record $4.4 trillion, it easily exceeded President Obama’s previous record budget of $4.2 trillion that he proposed for FY2017.

As I will discuss below, Mr. Trump’s latest eye-popping budget has zero chance of passing in Congress. But before we get to that discussion, we need to look at the unprecedented Mitch McConnell-Chuck Schumer spending deal passed on February 9 which will add at least $368 billion to the federal budget deficit over the next two years.

The most surprising thing about the McConnell-Schumer deal – in addition to the fact that it blew through mandatory federal spending caps – is that a bunch of Republicans voted for it. Otherwise, it would not have passed.

So much for the Republicans being the party of fiscal restraint and smaller government! Plenty of Republicans in the House and Senate had no problem voting for this spending boondoggle in order to avoid another government shutdown.

As you may recall, the Republicans had been desperate to increase US defense spending so that we could upgrade the military, which suffered during the eight years of the Obama administration. Yet the Democrats insisted that any increase in the military budget must be accompanied by at least a dollar-for-dollar increase in non-defense spending.

Even though the GOP controls the House, the Senate and the White House, enough Republicans caved so that the McConnell-Schumer deal passed the Congress on February 9.

President Trump wasted no time in signing the spending bill into law the same day. I guess we should not be surprised. For true conservatives, this is disgusting.

While the CBO has yet to release its revised deficit estimate following the $368 billion spending hike, and the expected decrease in federal revenues from the tax cuts, budget experts now fear the FY2018 deficit could top $1 trillion, almost double the original forecast.

On February 12, President Trump rolled-out his federal budget for FY2019 which begins on October 1. His new budget comes in at a record $4.4 trillion, easily eclipsing President Obama’s previous record of $4.2 trillion.

In President Trump’s first budget released last year, at $4.1 trillion, the White House estimated that the budget would be balanced in 10 years. Most analysts agreed that last year’s budget was based on economic forecasts that were too optimistic, such as the assumption that there would not be a recession over the next decade.

In reality, such optimistic assumptions are common among budget forecasts from presidents of both political parties. Yet in President Trump’s latest $4.4 trillion budget request, even the optimistic assumptions can’t balance the budget over the projected 10 years.  The Trump administration has abandoned that campaign promise.

It is important to note that the latest Trump budget for FY2019 includes deep spending cuts for a variety of government agencies, as we’ll see below. In fact, most progressives agree that the cuts are draconian; even some conservatives agree to an extent.

Yet even with these arguably draconian cuts, the increased spending on the military, funding for a border wall and increased infrastructure spending, the budget never balances over the 10-year forecast. Let’s take a look at the specific cuts and increases Mr. Trump asked for in his latest federal budget. 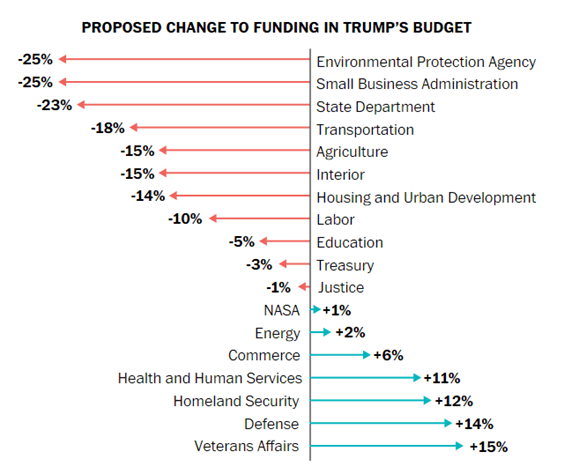 Even though the chart gives the impression that Trump’s budget cuts outweigh the increases, the budget deficit in FY2019 is forecast to come in at over $900 billion—again based on some very optimistic economic assumptions and no recession over the next 10 years. Trump’s budgets over 10 years would add over $7 trillion to the national debt.

Most budget experts warn that we could be looking at trillion dollar annual budget deficits for at least the next several years. And it could be even worse. President Trump proposed many of the same spending cuts in his first budget last year, and Congress ignored almost all of them. The same is expected again this year with regard to his FY2019 budget blueprint. In that case, the upcoming budget deficits will almost certainly be higher than projected – especially when we factor in the tax cuts.

Last Wednesday, at a gathering of Republican and Democrat lawmakers in the White House, President Trump reportedly suggested a new 25-cent-per-gallon tax on gasoline and diesel to help fund his ambitious infrastructure plans. This was reported in Bloomberg and elsewhere later the same day.

Trump previously has said he would consider raising the federal gasoline tax, which hasn’t been increased since 1993. But it’s not been part of the discussion on his infrastructure plan, and it’s an idea that most Republicans and even some Democrats have said they would oppose.

A White House official declined to comment on Trump’s discussions on this matter in the closed-door meeting but said that all options were on the table to meet the main objectives of the president’s plan.

I can’t imagine that the president would consider a tax increase of this magnitude as it would significantly undercut the benefits of his recently passed tax cuts.

Strategas Research Partners, a macroeconomic forecasting firm in New York, estimates that the 25-cent gas and diesel tax, along with higher fuel prices expected this year, would cost consumers about 60% of the savings they’ll experience from the tax cuts. If true, that’s a huge tax increase!

The US Energy Department estimates that gasoline prices will increase by 20-cents per gallon this year, costing consumers an estimated $34 billion. For an average family, a 12-gallon fill-up would cost $3 more with the new tax.

The federal gasoline tax is now 18.4-cents a gallon and hasn’t been raised since 1993 when Bill Clinton was president. A 25-cent increase would more than double it to 43.4-cents a gallon. And that doesn’t include any state or local gas taxes.

Yet Gary Cohn, Trump’s economic advisor, has been discussing a gasoline tax increase recently. Groups like the US Chamber of Commerce have also called for a 25-cent, phased-in increase in the federal gas tax to bolster the nation’s highway trust fund.

Such a gas tax would be a serious drag on the economy. President Trump should know this. Let’s hope this is just another example of him throwing out a controversial idea before he has given it sufficient consideration… I’ll leave it there for today.

Is the GOP still the party of deficit reduction and fiscal restraint? No.